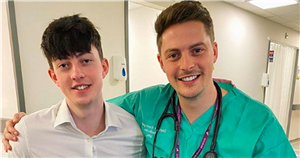 Dr Alex George has shared a heartbreaking tribute to his brother Llŷr on the first anniversary of his death.

Llŷr tragically died by suicide at the age of 19 last July, with former Love Island star Alex since becoming a Youth Mental Health Ambassador for the UK government.

The 30 year old has now penned the tribute to his younger brother on social media, sharing a sweet photo of the brothers posing with their parents.

He wrote alongside the image: "I can't believe it's been a year. Some days I really can't accept or understand that you are not here.

"We miss you so much Llŷr. You give me so much strength, even when times are tough and it would be easy to give up.

"Mum, Dad and Elliott are doing ok, they miss you so much too. I would do anything to go out for a spin in the car with you again. Love you x."

Vicky Pattison wrote: "Sending you love," with Great British Bake Off winner Rahul Mandal adding: "Sending lots of love to you and your family!!"

Earlier this month, Dr Alex admitted he was "sickened" by the amount of trolling this year's Love Island contestants have been subject to.

In the wake of Chloe Burrows receiving death threats after entering the villa, he wrote in a social media post: "I am shocked and appalled at what we have witnessed online over the last few days.

"I am saddened to see how much negativity and hate there has been online during this series of Love Island.”

The doctor continued: "Hard to comprehend that people are sending death threats and encouraging contestants to 'kill themselves' just because they don't like what they are seeing on screen.

"As someone who has lost a brother to suicide, I find this truly sickening. Have we learnt nothing since the passing of our beloved Caroline Flack?

Dr Alex ended the hard-hitting post with the be kind sentiment, as he said: "THINK before you type. Be kind. Always."

He captioned the post: "The online events of the last few days has been nothing short of shocking.

"As youth mental health ambassador I am currently working on an anti-bulling campaign, fair to say recent events have justified its need more than ever."