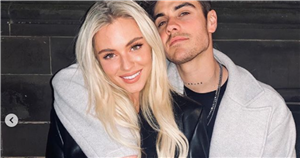 Love Island’s Lucie Donlan became emotional on Saturday as she attempted to renovate a kitchen table using an electric sander.

“Just a couple of real clips of doing up the Cottage….” she captioned the post, which has since received nearly 100k likes.

The TikTok video shows Lucie, 24, clad in a blue boiler suit, black gloves and a beige baseball cap which kept her signature blonde locks neatly tucked away as she sobbed with her hands on her face. Luke, who was coupled up with Demi Jones on the show, then pans the camera to show a dining table outside.

“You ruined it,” he joked, which prompted Lucie to insist he “shut up.”

After a brief moment to collect herself, Lucie then got back to work and could be seen walking around the garden with a variety of tools and a beaming smile.

The final portion of the video shows Lucie working on various projects around the house that they initially started working on back in 2021.

Lucie also posted the hilarious clip to her renovation Instagram grid, which is similar to a page owned by Molly-Mae Hague.

In the caption, she wrote: “To end the year I thought I’d show a couple of clips of the lows caught, even though the Cottage Renovation has been looking fun I’ve had a lot of struggles, cry’s and moments where I want to give up!

“But that’s all part of it, and I’ve learnt so much.. so here is a little laugh for you all, I wish I could find more videos but for now, enjoy Happy New year.”

Reacting to the video, one fan wrote: “If you haven’t cried like that over something like a table, you’re not normal. We’ve all been there.”

“Why am I laughing but so heartbroken for you at the same time – that first clip,” another wrote.

“It's nice to see normal reactions to everyday issues! It's not all glitzy and glamour! Wishing you both a very Happy New Year in your new Cornish cottage,” a third said, as a fourth added, “I'd probably have had a fit on Luke the way he is videoing and laughing manically to be truthful.”

Nearly a year ago, Lucie opened up about her body confidence issues in an exclusive interview with OK! following the launch of her partnership with Ann Summers.

She explained: “In the past I struggled with my weight but one day I decided I needed to change my way of eating and lifestyle so I got into my fitness and it made me become way more confident in my body. Back in school I really struggled with that but I've come on leaps and bounds since then.

“Even doing this campaign and being in front of the camera in underwear, it really does boost your confidence. This is the most natural photoshoot I've done with Ann Summers, I want to show young girls it’s ok to be natural and reveal your natural beauty."