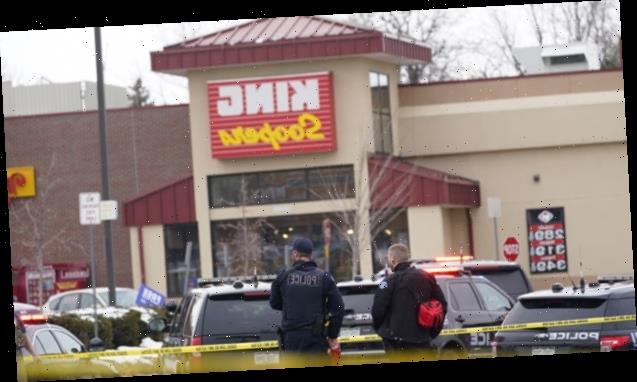 Countless celebrities and activists reacted to the horrific shooting inside a grocery store in Boulder, Colorado that killed 10 people.

Celebrities took to Twitter with grief, calls for stricter gun legislation and more mournful statements after a gunman killed 10 people inside a supermarket in Boulder, Colorado on March 22. The shooting — which took the life of police officer Eric Talley among the 10 victims — happened inside a King Soopers grocery store about a couple of miles south of the University of Boulder’s campus, The New York Times reported. The suspect, who was injured and seen with what appeared to be blood covering his right leg, has been taken into custody.

The horrific shooting took place on Monday afternoon, and it didn’t take long for some of Hollywood’s biggest stars to react. “Tragedy struck in Boulder, CO tonight. My heart goes out to the victims and their families. Praying for healing. #BoulderStrong,” country music star Luke Bryan tweeted.

Former congresswoman Gabby Giffords, who is also known for her gun control advocacy, pointed out how this shooting adds to a long list of gun-related tragedies: the deaths of eight individuals (six whom were of Asian descent) amid a shooting spree at three spas in Atlanta on March 16, and a shooting that killed one person at a party in Philadelphia on March 20. “Today it’s a tragedy in Boulder, Colorado. This past weekend it was a house party in Philadelphia. And last week it was an armed attack on Asian American women in the Atlanta area. It doesn’t have to be this way. It’s beyond time for our leaders to take action,” the former politician tweeted.

Giffords then reflected on her own tragedy, after surviving a gunman’s assassination attempt amid a shooting that took six people’s lives in 2011. “This is an especially personal tragedy for me. I survived a shooting at a grocery store that devastated my beloved Tucson. It’s been 10 years and countless communities have faced something similar. This is not normal,” Gifford added in another tweet.

Mia Farrow was on the same page when it came to gun control. “In all probability leadership in America will yet again do nothing – even as we so desperately need reasonable gun legislation,” the Rosemary’s Baby star tweeted. Fred Guttenberg, whose 14-year-old daughter died in the Stoneman Douglas High School shooting of 2018, was also just as frustrated. “At least 6 are dead. I said Atlanta was predictable & inevitable. So was this. I discussed this scenario with Republicans who bullsh-ted me about why they needed to vote no on HR8. End the filibuster. Gun safety needs to move forward without them,” he tweeted.

Other celebrities showed their support for Boulder amid this scary time. “Sending Boulder some love,” Evan Almighty star Wanda Sykes tweeted, while former First Lady of California Maria Shriver tweeted, “Ten people. Their families, their loved ones. There is so much pain right now. These families will never be the same. May we all be gentle with others tonight. May we check in on those we care about. Life is so damm fragile. Atlanta…Boulder.”

Kamala Harris‘s niece and Ambitious Girl author Meena Harris tweeted, “The Atlanta shooting was not even a week ago. Violent white men are the greatest terrorist threat to our country.” And Shannon Watts — who is the founder of Mom’s Demand Action for Gun Sense in America — pointed out what she found especially alarming about Colorado’s gun laws.

“Colorado is one of 45 states where open carry is legal and largely unregulated. This shooting in Colorado Springs in 2015 shows how dangerous it is when civilians are asked to decide whether someone is open carrying or about to open fire,” Shannon tweeted.