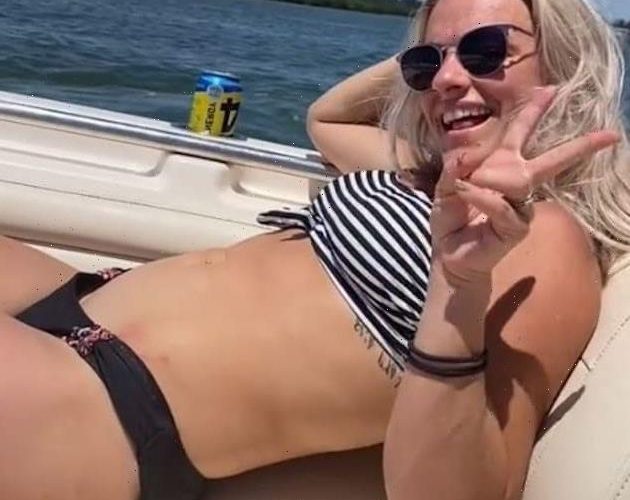 Teen Mom OG, Teen Mom 3 and 16 & Pregnant cast member Mackenzie McKee would like all of her critics to know that they’re wasting their time.

They can go ahead and drag her.

They can go ahead and try to cancel her and call her a racist and allege that she’s totally insensitive and basically say whatever they want to about it.

She’s just gonna kick up her feet, take off many layers of her clothing and not be remotely bothered by these critiques at all.

Earlier this year, as you may recall, McKee came under some pretty intense fire.

Because she labeled Vice President Kamala Harrris as a “colored person.”

McKee said she tried to address this misguided word usage head-on, and tried to publicly apologize to co-star Cheyenne Floyd in order to smooth things over…

… but was told by Teen Mom producers to wait and deal with it on air instead.

Mackenzie has since grew concerned that she might get fired as a result.

She’s also rambled on and on about cancel culture and about how unfairly she was being treated for making a simple mistake and about how everyone needs to calm the heck down.

Which is ironic, of course.

Because McKee has been the only person going on and on about this topic.

“Every single day. I do not stand for racism and Never have,” she says, as if anyone is out there wondering what Mackenzie McKee stands for or does not stand for.

“I’ve learned so much and every one of us needs to open our eyes. I’m truly sorry for what I once said,” the 26-year old wrote on Instagram in April.

Now, a few weeks later, it appears as if McKee has stopped trying to defend herself.

She’s straightening her crown, or something.

She’s done speaking her nonsense about how she shouldn’t get canceled and now she’s just gonna let the chips fall where they may.

She’s also gonna let the sun shine down on her bikini-clad body.

And for that, we thank her.

At the outset of a TikTok video she shared over the weekend, the mother of three can be heard telling the camera, “so I might just be living my best life.”

The MTV personality’s footage then cut to numerous shots of her children, along with controversial husband Josh steering a boat.

Not to mention close-ups of her lying across a bench at the bow of the vessel, obviously.

“So we rented a boat for the day.”

Previous to this relaxing outing, Mackenzie shut down a troll who commented “racist” on a photo of her doing some yoga on the beach.

“If you think that then why are you following me and spending time out of your day on my page?” she asked in response, referencinb Vice President Harris and adding:

“It’s reasons like YOU we all can’t grow up and move forward. Also actually I don’t HAVE to like her.

“That’s the beauty of life.”

In January, Mackenzie made the racially-charged comment about the second-in-command.

“There are a lot of amazing women in the world for my daughters to look up to and see as role models. Kamala Harris is not one of them,” Mackenzie wrote on Facebook back then.

“It blows my mind that out of all the amazing colored women in this world, that is the one who is making history.”

Wrote Floyd in response to her colleague’s epithet:

“It’s time to have a conversation, a form, something to educate and enlighten because the ignorance is pervasive.”

And when McKee tried to have a heart-to-heart with her about it?

Mackenzie says she got shot down. HARD.

“And her message back was ‘I have no sympathy for you. Welcome to day 1 of being uncomfortable because of the color of your skin.'”

“So if she hates me, that’s fine. That’s fine because I said something ignorant, but I messaged and told her that I love her.”

Anyway, it’s all kind of a mess, but McKee wants to remind you she doesn’t care, and is just living her best life now, okay?

Got that? Just making sure.