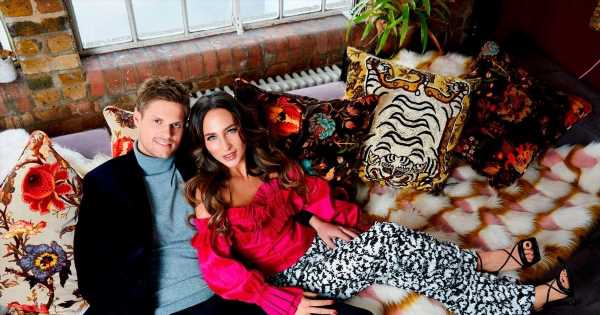 Made in Chelsea’s James and Maeva have lived out their relationship in hit reality show and now they are revealing what goes on behind the scenes of it during filming.

The couple’s relationship blossomed after meeting on set and, while having experienced ups and downs in front of TV audiences, they are currently in a great place after reuniting and have moved in together.

Sitting down with New! Magazine in their new home, James and Maeva appeared as comfortable as ever with each other as they discussed their journey on Made in Chelsea – which has seen them in pretty awkward positions.

“I was really, really sick one day,” Maeva confessed to one moment on the show she’d rather forget.

“You’re not going to tell that are you?” James interrupted, before his girlfriend continued.

“We couldn’t do the scene properly and the scene took hours to be made because I was really sick and I had to go to the toilet all the time,” she said

“We could have done the scene in the toilet actually.”

In another reveal, James jokily disclosed the ‘real’ height of one his co-stars.

“I don’t like filming with Tristan because he makes me feel tall,” he said. “That’s probably the biggest secret on the show as well…he’s actually only 5ft 5.”

Aside from being involved in many uncomfortable run-ins and onset flare ups on the show, the loved-up pair have found major positives from their experience filming.

“I get to work with my other half even if we’re shouting at each other that’s my favourite thing,” James said fondly.

“I get to spend more time with my beloved girlfriend.”

Maeva also praised the impressive locations they get to visit being part of the cast of Made in Chelsea.

“You actually find like hot spots when you’re filming that you wouldn’t go to and then somehow, someone finds one and then you end up going back there all the time,” James added.

“We found a good few spots in London like that.”

Reflecting on their time on the E4 show, James acknowledged how much life has changed for him since joining, going from “boyhood to manhood”, while Maeva referred to her hectic scene-stealing moments with cast members.

“My journey on MIC has been drama the whole time – no rest!”

Giving a tease of what’s to come this season, James nodded to dressing up interestingly:

“We try on a few costumes and I think that’s all we can say right now. It’s incredibly embarrassing, but you’ve got to laugh at yourself in those situations.”

Made in Chelsea airs Mondays at 9pm on E4. Read James and Maeva's full interview here.