Maren Morris and Gabby Barrett are no longer performing at the 2021 CMT Music Awards.

The two country singers took to social media to announce that they would be skipping the annual awards show due to various reasons.

“Due to a scheduling conflict, I will not be performing at the CMT Music Awards on Wednesday,” Morris wrote on her Instagram Stories, via Billboard. “I know @jpsaxe will slay it and I am so excited for his album to come out soon!”

Morris was scheduled to perform her and JP Saxe’s song “Line by Line,” and has now been replaced by Ingrid Andress. 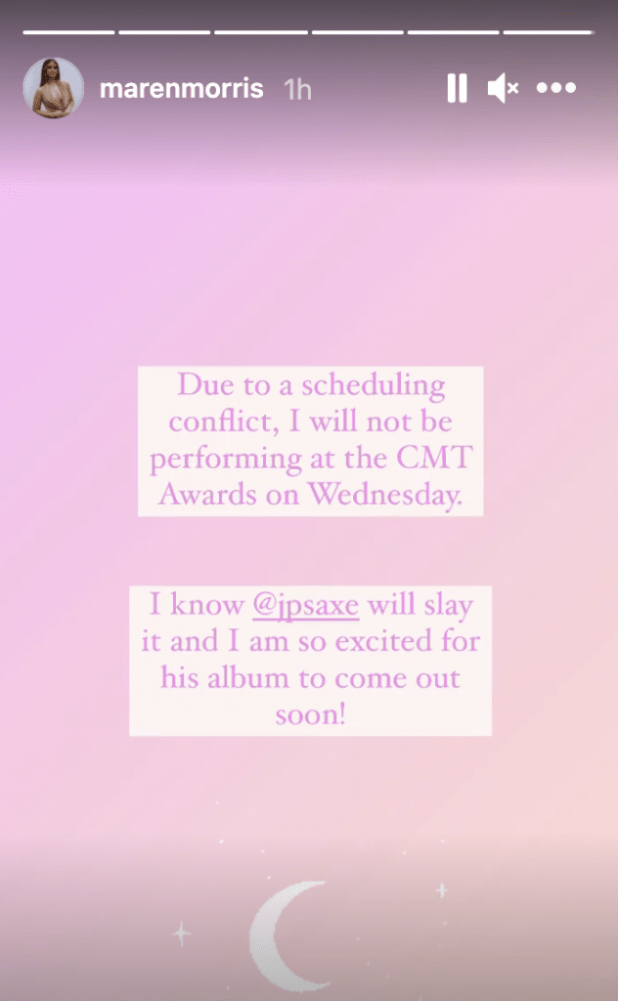 As for Barrett, she was set to take the stage with Lady A and Carly Pearce. Lindsey Ell is now taking her place.

“I’m really sad to share that because of personal circumstances I won’t be able to perform with @ladya and @carlypearce on Wednesday at the @cmt Music Awards!” she wrote on Instagram. “I’ll be rooting for you guys and all of the incredibly talented nominees and performers! ❣️So appreciate all of your support and will see yall on the road this summer :)”

Morris is up for three nominations. Both Morris and Barrett are up for Female Video of the Year.

ET recently spoke with Barrett on her whirlwind year and success after being on American Idol.

“It’s overwhelming but in the best way,” she told ET. “This is one of those things where it’s hard to put into words because it doesn’t really feel real. When you work for so long towards something and it actually happens it’s hard for me to switch gears because I’ve just been in the mode of trying to get to these places, getting on the award, and getting number one songs. Now that you’re actually at the pit stop, ‘We’re here, we’re making a stop.’ It’s like ‘Whoa!’ It’s really cool.”

“I had no idea this was going to happen. Ever since getting off American Idol and hitting back at the ground, moving to Nashville and diving into everything and working hard to get a record deal, writing songs, and really getting into the community, the music industry has been absolutely wonderful towards me,” she expresses. “Which is extremely humbling. I’m very blessed for that.”