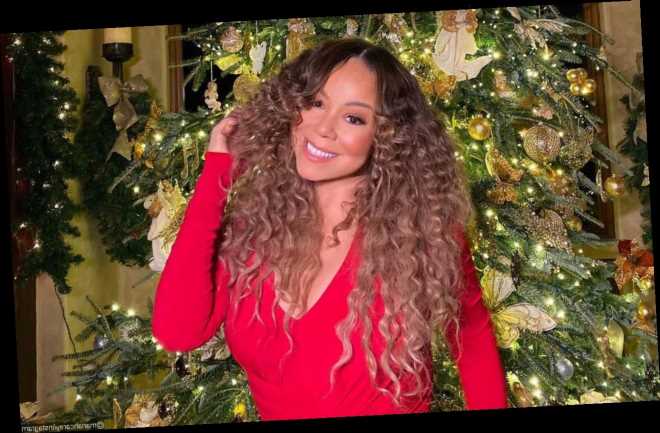 The ‘All I Want for Christmas Is You’ hitmaker gets emotional as she pays tribute to her twin children during an acceptance speech at the African American Film Critics Association awards.

AceShowbiz –Mariah Carey fought back tears as she accepted the AAFCA Innovator Award on Wednesday (07Apr21).

The 52-year-old star admitted it was an “honour” to have been chosen for the accolade by the African American Film Critics Association as she reflected on the early hardships she experienced, which inspired her to “create out of necessity” in order to build a better life for herself.

Following praise from friends and collaborators including Gayle King, Naomi Campbell, Lee Daniels, and Misty Copeland, Mariah said during the virtual telecast, “It is an honour to be recognised as an innovator because in my experience when you have holes in your only pair of shoes and are existing on a dollar a day, choosing between food and a subway ride, when you are the only one who believes in your vision for yourself, you better gets to innovating.”

The “Fantasy” singer then hailed her nine-year-old twins Moroccan and Monroe – who she shares with ex-husband Nick Cannon – as her greatest innovation and inspiration before growing emotional as she paid tribute to her late relative.

Dedicating the award to all the loved ones and family members who passed away over the last year and “who we have yet to get justice for, who we couldn’t send home in the way we’re used to,” she added, “And on a very personal note, my cousin Vinny, LaVinia Cole, who I really wish could’ve lived to read my memoir, The Meaning of Mariah Carey. Her recollections called my ancestors forward who I know carried me through that process.”

“If we have faith as a mustard seed, nothing is impossible to us. Oh, and by the way that’s Matthew 17:20, not trying to take publishing from the good book. Love ya, appreciate ya and enjoy ya!”

Elsewhere during the ceremony, Viola Davis reflected on the legacy she wants to leave as she accepted the Icon Award.

“It’s been the ride of my life to have this career,” she smiled. “I have been blessed and fortunate in every single way to be able to literally give you all the human beings, the black and brown human beings that I’ve embodied and to give them to you and to help you to feel less alone through their stories.”

“I will continue to leave a legacy of hope, of life, of humour, of pathos, of humanity for as long as God will have me here. I just want to say this one thing, because of this past year and everything that we have been through, what the caterpillar calls the end of the world, the master calls the butterfly. We have within us, all the tools that are necessary to elevate our lives in the most unbelievable profound ways.

Andra Day was named Best Actress for “The United States Vs. Billie Holiday“, and “Judas and the Black Messiah” was honoured with Best Picture, while Best Supporting Actor and Actress went to its stars Daniel Kaluuya and Dominique Fishback.