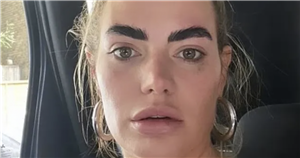 Megan Barton-Hanson suffered an eyebrow-raising beauty mishap she revealed on social media after a routine tint didn’t go quite as planned.

The Love Island star discussed her eyebrow colouring disaster after she spotted a Tik Tok of a woman who declared that her eyebrows looked like they had been badly drawn on with a Sharpie pen.

Seeing this clip triggered Megan to remember her own traumatic beauty fail, posting a photo on Instagram Stories of herself shortly after her eyebrow tint went disastrously wrong.

In the image, Megan is seen sitting in a car looking straight into the camera appearing startled at the sight of her mishap.

The 27-year-old confessed that she spent the next few hours crying over her eyebrows and even attempted to fix their appearance by dying them lighter with bleach herself.

While Megan felt low about the whole situation at the time, looking back, she saw the funny side she let her followers know.

“Phahaha I’m actually in hysterics,” she captioned the photo. “It’s the mascara from sobbing for me…who does that to someone?”

The TV personality added that she had also been “scalped” by a hairdresser in another beauty session gone bad, leaving her with a bald patch, shown in a video she also shared with her 1.6 million followers.

“Oh, and once a hairdresser scalped me… I think I was a bad, bad person in a past life,” she added.

"Thank god I could laugh at it. @joel_maghair21 was colouring it in with brown eyeshadow for months."

Megan’s shocking beauty experiences come after news broke that she and James Locke had called time on their relationship after only two months together.

“Megan's relationship with James hasn't worked despite her being hopeful after he surprised during the early days of them dating,” a source told MailOnline.

"As time has gone on, they have argued more and the holiday they shared together in New York last week didn't go at all to plan.

The couple had spent a romantic holiday in New York together before breaking up weeks after returning home.

Megan and James had posted many photos of themselves enjoying their festive time away as a couple as they visited the Rockefeller Center and other iconic landmarks in the Big Apple.

Since splitting up however, it appears Megan didn’t want to go down memory lane with this past relationship anymore as she deleted all trace of James on her Instagram page.