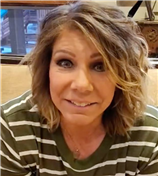 The veteran Sister Wives cast member has shared a number of new memes online, all of which point to a couple of things:

Meri has done this often over the past several months, of course.

She has frequently uploaded cryptic quotes that simply have to be directed at her spiritual husband and the mess of a relationship in which she finds herself.

And yet: Meri has also insisted that she'll never leave Kody, despite the father of 18 having admitted on more than one occasion that he left Meri eons agoo — emotionally, that is.

Did something happen to produce this new onslaught of memes and photos?

We have no idea.

1.It All Started on Thursday, July 16

2.Not About the Benjamins

6.Are We Sure Meri is Talking About Kody Here?

7.Just Consider What Else Meri Has Said Via Meme:

9.Jesus Walks… and Does Other Things, Too

15.Or Maybe She Really Loves Him?

17.She Continued at the Time:

18.She Continued Some More: