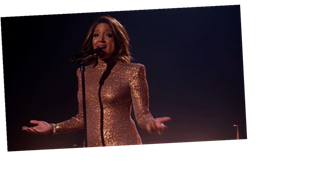 Mickey Guyton had a historic night at Sunday’s GRAMMY Awards. The 37-year-old country singer was already the first Black female solo artist to earn a GRAMMY nomination in a country music category, and she also performed for the first time on the GRAMMYs stage with an emotional rendition of her nominated song, “Black Like Me.”

Guyton dazzled in a gold long-sleeved gown for her performance, which put her at center stage. Stars like Maren Morris and John Mayer were seen applauding Guyton after the performance, with fans sharing their support on social media.

For the first time on the #GRAMMYs stage, @MickeyGuyton! ❤️🎶 pic.twitter.com/FY8Yvr5FqQ

Mickey Guyton singing the powerful “Black Like Me” #GRAMMYspic.twitter.com/xASTSHhkWc

Wow #MickeyGuyton is a Black woman singing country music & with a song titled #BlackLikeMe I like her automatically, this is so major!

“Black Like Me” was also nominated for Best Country Solo Performance, marking a historic moment in awards show history. While Guyton lost out to Vince Gill’s “When My Amy Prays” during the GRAMMYs pre-show ceremony, she shared her gratitude at the nomination on Twitter.

“Although I didn’t win this Grammy, it truly is an honor and I will forever be a Grammy nominated artist,” she wrote. “I love you guys.”

Although I didn’t win this Grammy, it truly is an honor and I will forever be a Grammy nominated artist. I love you guys.

In 1976, The Pointer Sisters’ song, “Live Your Life Before You Die,” was nominated for Best Country Vocal Performance by a Duo or Group at the GRAMMYs but a solo Black female singer has never been nominated until Guyton.

Following her nomination, Guyton released an emotional video, saying, “This Grammy nomination is for every Black girl that felt unseen. That felt unheard. That felt unloved. That felt like they weren’t enough. That felt unpretty. That felt shoved in a corner and completely unconsidered. This is for them.”

Get the complete GRAMMYs winners list, plus GRAMMY Awards live updates at ETonline.com