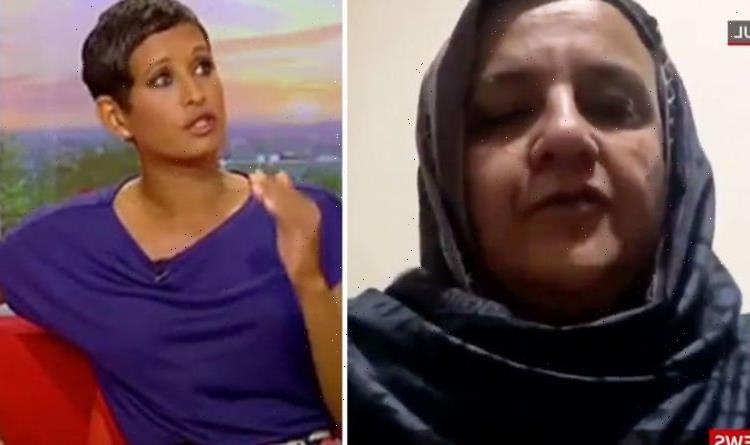 Tonight, BBC News shared scenes from Kabul after Taliban reached the capital as part of their mission. Speaking on the channel, Afghanistan’s Minister of Education Rangina Hamidi said she was living in “fear” like every woman out there.

Speaking on the news, she said: “Deep down in my heart, I keep telling myself that I haven’t done anything bad and hopefully I won’t have to pay the price for joining a Government position.

“I might face consequences that I have never even dreamed of and I guess that’s the price that we pay for trying to make this world a little better than when we came to it.”

When asked if she was worried about having a knock on the door, she replied: “Anything is possible.

“I’m actually sitting in the hallway of the house where there’s not too many close windows nearby.”

Rangina added that earlier on in the day there had been some gunshots.

“I brought my daughter and other kids into the house with us,” she continued, in a bid to keep them safe.

She added: “But in terms of how safe we are, and how this night, if we remain until the morning, it’s very difficult to predict whether we will make it to the morning.”

The BBC presenter expressed her concerns for Rangina by sharing a heartbroken emoji.

In response to this, one of her fans asked how Britons could make a difference to the situation.

The presenter went on to retweet a video of chaotic scenes at Hamid Karzai international airport.

Lindsey Hilsum, a Channel 4 International News Editor, commented: “Afghans, especially those who worked for the government or international organisations, are desperate to leave the country – hence these chaotic scenes at the airport.

“But commercial flights in and out have been suspended.”

Naga’s BBC Breakfast has also reacted to Rangina’s video this evening on Twitter.

He wrote: “The brutal reality.”

Taliban troops entered Kabul from all sides of the capital this week in a bid to regain control of Afghanistan.

They are yet to officially declare victory and that they are now in control of the nation.

The Taliban held power in Afghanistan from 1996 until they were ousted by American forces.