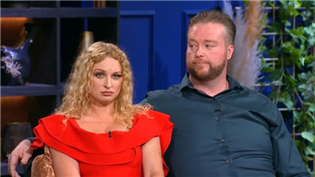 Mike Youngquist and Natalie Mordovtseva are on this season of 90 Day Fiance: Happily Ever After?

When this was filmed, they were still together.

But it has long been reported that they separated after less than one year of marriage.

Now it appears that Natalie has confirmed the much hyped split … albeit accidentally.

As many fans have noted, Natalie Mordovtseva is in the running for the Maxim cover girl contest.

“Vote for Nataliia Podiakova,” reads the headline of her promo for the contest.

“I’m an actress and reality tv star,” she notes.

She then lists her reality TV experience as part of 90 Day Fiance Seasons 7 and 8.

She was on Happily Ever After? Season 6, which is currently airing.

Natalie also writes that she appeared on 90 Day: The Single Life.

Obviously, one of those things is not like the others.

Firstly, she has yet to appear on The Single Life or even be announced for the spinoff.

Secondly … The Single Life is for 90 Day Fiance stars who tried but ultimately failed to find love on the show.

The title is fairly self-explanatory … because the stars are not married when they film that show.

From Danielle Mullins to Big Ed Brown to Colt Johnson, they’re familiar faces from the show who want another chance at love.

That means that things did not work out well with Mike.

So that’s not a shocker, given what was reported earlier this year.

The infamous Uncle Beau (who is admittedly not necessarily the most reliable source) revealed that they had split.

Their split is also not surprising, purely from a “we are people with eyes who saw them on TV’ perspective.

Natalie and Mike were mismatched from the start, with very different ideas about life.

Though interfaith relationships are certainly possible, their contrasting beliefs alone could have done them in.

But Natalie and Mike’s problems weren’t exactly lurking beneath the surface.

They had major communication issues.

They had toxic fights. They exchanged insults. There were wild trust issues.

It was clear that they did on some level love each other.

But they both had funny ways of showing it.

Natalie would go on the attack.

Mike’s toxicity was much more passive … but every bit as smothering to their marriage.

At times, it even seemed like Natalie’s vicious verbal attacks on Mike were aimed to just get any reaction from him.

It was an all around thoroughly unhealthy relationship for them both.

Natalie obviously realized her mistake, or was contacted by a producer, and pulled that version of her Maxim promo.

But the internet is forever, especially when you’re famous.

So yes, Natalie has unintentionally confirmed the end of her marriage.

What we don’t know yet is exactly how things fell apart.

We can all name dozens of reasons for which Natalie and Mike should not be married.

But which thing, or things, actually made them both realize that? Only time, and Happily Ever After?, will tell.