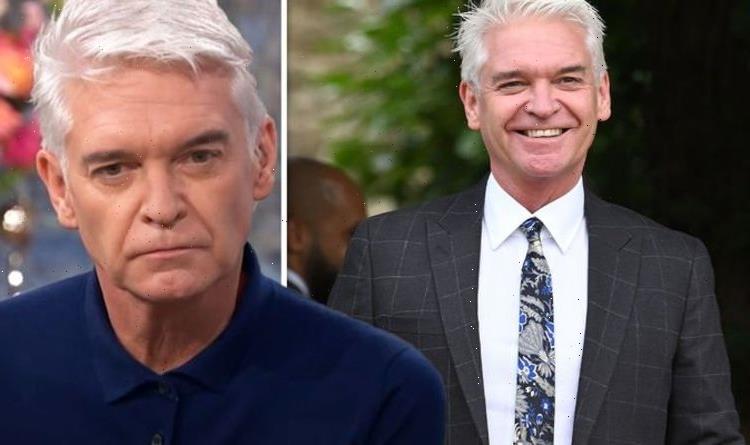 This Morning presenter Phillip Schofield, 57, was left in floods of tears as he shared an emotional acceptance speech after receiving special recognition ahead of the British LGBT Awards 2021 this evening. The star – who came out as gay at the beginning of last year – appeared in a teary video to give a thank you speech to his friends and family, who he said “caught” him after he came out last year.

What a proud moment for me personally

Phillip appeared in a pre-recorded video ahead of the glamourous event, as he is unable to attend tonight’s ceremony in person.

The ITV personality started to break down, as he confessed that he has never individually won an award, despite his TV career spanning four decades.

Addressing the honour, a choked-up Phillip thanked his close-knit team of family and friends for supporting him.

He said: “Wow. This is a biggie. What a proud moment for me personally.

Phillip went on: “Any award you win as a team that’s there propping you up and definitely that’s the case with this one.

“I had the most extraordinary people that helped me pack the parachute before the jump.

“Friends and family, loved ones and then there were an enormous amount of rainbow arms outstretched to catch me when I reached the bottom of my jump,” he added.

Since his announcement, the star has spoken out about the support and love he has received from the LGBT community.

Last year, Phillip appeared on This Morning’s famous blue sofa with his co-host Holly Willoughby to annouce that he was gay during a live broadcast of the show.

He spoke about his sexuality in February 2020 after initially sharing the news via a statement on Instagram.

To his 3.2 million followers, he said: “You never know what’s going on in someone’s seemingly perfect life, what issues they are struggling with, or the state of their wellbeing – and so you won’t know what has been consuming me for the last few years.

“With the strength and support of my wife and my daughters, I have been coming to terms with the fact that I am gay,” he added.

Phillip has been married to wife Stephanie Lowe since 1993 and together they share two daughters, Ruby and Molly.

Eight months after his announcement, the ITV favourite admitted his “greatest concern” is for his wife, and candidly told how they haven’t “discussed divorce”.

Speaking about the status of his relationship, Phillip said: “We’re picking our way through. It’s a work in progress.”

“I’m still married to Steph. With divorce, we’ve not discussed that at all.”

The presenter explained he has to “reconcile” himself before he makes any decisions and added it will take “time”.

“Steph is a work in progress,” Phillip commented, adding: “It is not in my nature to hurt people so I have to reconcile myself that I have done that,” he told Chris Evans on his How to Wow podcast.

This evening’s event is being hosted by Gok Wan and Ru Paul’s Drag Race UK winner Lawrence Chaney at The Brewery in the nation’s capital.