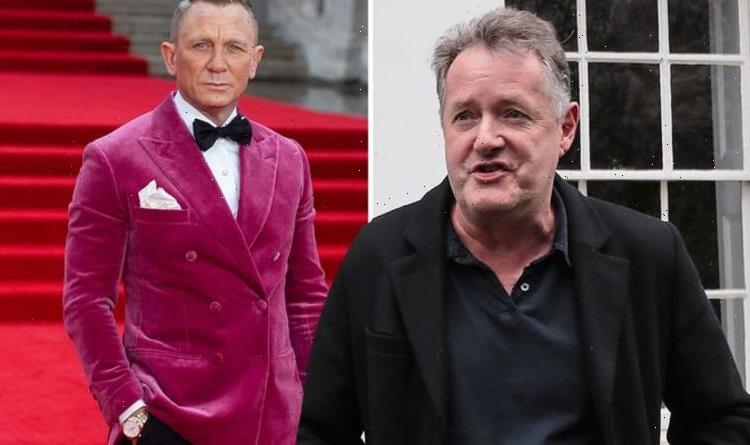 All eyes were on James Bond veteran Daniel Craig at the No Time To Die film premiere in London last night. The 53-year-old opted for a pink velvet jacket with a black bow tie, smart trousers and shoes, which certainly gathered attention from fans and celebrities alike.

Piers Morgan, 56, expressed his thoughts about Daniel’s outfit on his Twitter page.

He shared a picture of the actor alongside the caption: “O dear O (7) dear.

“You’re supposed to be a steely-eyed assassin with exemplary sartorial taste, Mr Craig… not an Austin Powers tribute act,” alongside a thumbs down emoji.

Twitter user Ian Dover insisted the journalist was “jealous” that he wouldn’t be able to pull off the striking blazer.

J’s mum added: “Someone needs to tell Piers, that just like Santa, James Bond, is not real.”

“Have u ever worn a pink jacket to a film premier or dinner, I think he looks smart in it,”(sic) Paul Brown commented.

“I think that’s a fictional character. Always here to help.”

The latter shared a selfie of her wearing a bright coloured pink jacket alongside a picture of Daniel at the star-studded event.

Dan also jumped on the trend and compared the glitzy jacket he wore on Strictly Come Dancing last weekend to Daniel’s.

He was also joined by his 29-year-old daughter Ella Craig while his wife Rachel Weisz stayed in New York due to filming.

The film star has played the iconic character for 15 years and recently spilled that the latest Bond film would be his last.

At the premiere, he told reporters: “It’s been a bittersweet couple of years, so one has to keep things in perspective.

“The decision to leave is still there, I’m just glad that we’ve got a chance to celebrate tonight and have a premiere.

“That seemed like such a far away thing for a while.”

Actors predicted to be the next Bond include; Idris Elba, Tom Hardy and Tom Hiddleston.