Piers Morgan reveals that his book Wake Up is a bestseller

Piers Morgan, 55, was left fuming after Labour lost Hartlepool in the by-election to the Conservatives. The former GMB star expressed his anguish while sharing an article on Twitter, that reported that there is now a growing feeling that Boris Johnson could be sent for another 10 years as prime minister following the landmark win for his party.

In the article shared by Piers from the front cover of today’s The Times, it read: “Boris Johnson is preparing for a decade long premiership after a series of historic victories in Labour’s former heartlands.

“The prime minister said yesterday that he would embark on a ‘massive project’ of levelling up the country as he sought to cement the Conservatives electoral success.”

“Johnson could outlast Margaret Thatcher, who was in Downing Street for 11 years.”

Alongside the piece, Piers vented his frustration over Boris’ handling of the coronavirus pandemic over the past year. 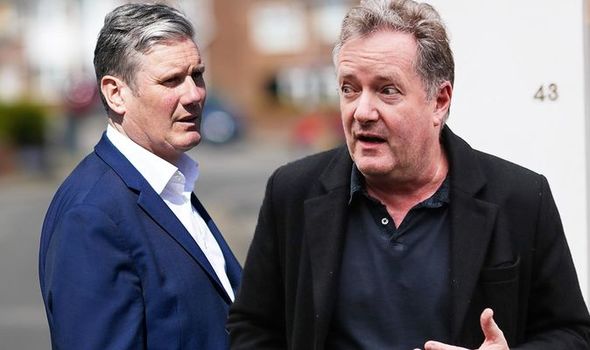 He typed: “So, Boris Johnson’s reward for his woeful handling of the pandemic is going to be ‘ten more years’ as Prime Minister?

“What a joke – only I’m not laughing. Get a grip ⁦@Keir_Starmer⁩ & start holding his chaotic, entitled, lie-infested feet properly to the fire.”

His followers were left divided by the comments, as they took to the comment section to air their views.

One said: “I expect you still turned up for your vaccine.”

Another replied: “Piers – surely you give credit to the government for their boldness in creating the furlough scheme which has meant that businesses and many people’s jobs have survived rather than been lost.”

A third commented: “TBH it doesn’t matter who has been in power as they would all be in the wrong somehow. At least we have a way out in sight. My only gripe is that the government kept trusting the public to do the right thing, too many bent rules and made it worse.” (sic)

While a fourth responded: “British people have been inclined to vote conservatives for the last 50 plus years…it would take an Attlee or Blair figure for Labour to win honestly.”

Piers’ comments come as Boris tightened his political grip on England as he pushed the Conservative party farther into the country’s working-class heartlands.

The move plunged the opposition lead by Sir Keir and his party into crisis.

The Tories have been propelled to victory by a “vaccine bounce”, as the prime minister led his party to a series of remarkable midterm election victories.

The most significant being taking the north-east town of Hartlepool from Labour in a parliamentary by-election.

Throughout England, the Conservatives were dominant, with the victory in Hartlepool, England’s tenth-most deprived town and a safe Labour seat since it was created in 1974, being a landmark result.

Jill Mortimer, a North Yorkshire farmer, comfortably won the Hartlepool by-election for the Conservatives with a majority of 6,940, overturning a Labour majority of more than 3,500 at the 2019 election.

A cabinet minister claimed that “something has fundamentally shifted” in the political landscape.

A senior backbencher for the party said: “Keir needs to decide whether he is serious about wanting to be leader or not.

“Because if he does it is going to take some tough decisions, including looking at who is in the shadow cabinet, who is in his office and who is in the party structure.”

08/05/2021 Celebrities Comments Off on Piers Morgan slams Keir Starmer after Labour Party loses votes in election ‘Get a grip!’
Lifestyle