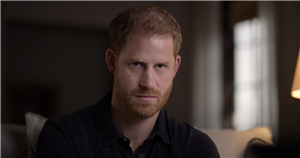 Prince Harry has taken a fresh swipe at the Royal family after saying he learned families can "feel shame" when they hear of mental health struggles.

The 36 year old starred in the Apple TV+ series The Me You Can't See with Oprah Winfrey last week, where he accused his family of showing "total neglect" to his and his wife Meghan Markle's mental health struggles.

He has now appeared in a bonus episode of the series, where he says "parents" and "siblings" can feel shame for not noticing family members' mental health struggles.

Speaking to actress Glenn Close on the episode, Harry says: "As parents, as siblings, certainly from what I've learned – there's an element of shame we feel, because we're like, 'How could we not have seen it?'

"How did we not know? How did you not feel comfortable enough to come to me and share that with me?

He went on to say he "loves to see" how families "thrive" after discussing mental health issues as he spoke to Glenn about her sister's suicidal thoughts.

He continued: "To see behind closed doors, the realities of a family struggling – but not just struggling, thriving because of that family connection. For me that's the overwhelming positive of it.

"You as a family have had your fair amount of struggles – but what I see from this story that you've told and the experiences that you've been through, it has brought you so much closer together as a family – and I love to see that." Harry also opened up on how he feels "ashamed" himself at how he couldn't be more help to his wife Meghan who told him of her suicidal feelings during her pregnancy with their first child Archie.

He said: "So many people are afraid of being on the receiving end of that conversation because they don't feel like they have the right tools to give the right advice.

"But what you [want] to say is 'You're there'. Listen, because listening and being part of that conversation is without doubt the best first step that you can take'."

He went on to confess: "I'm somewhat ashamed of the way that I dealt with it."

Meghan told Harry of her feelings as they were getting ready to head to the premiere of Cirque du Soleil's Totem at the Royal Albert Hall.

He has said of that evening: "Of course, because of the system that we were in and the responsibilities and the duties that we had, we had a quick cuddle and then we had to get changed to jump in a convoy with a police escort and drive to the Royal Albert Hall for a charity event."