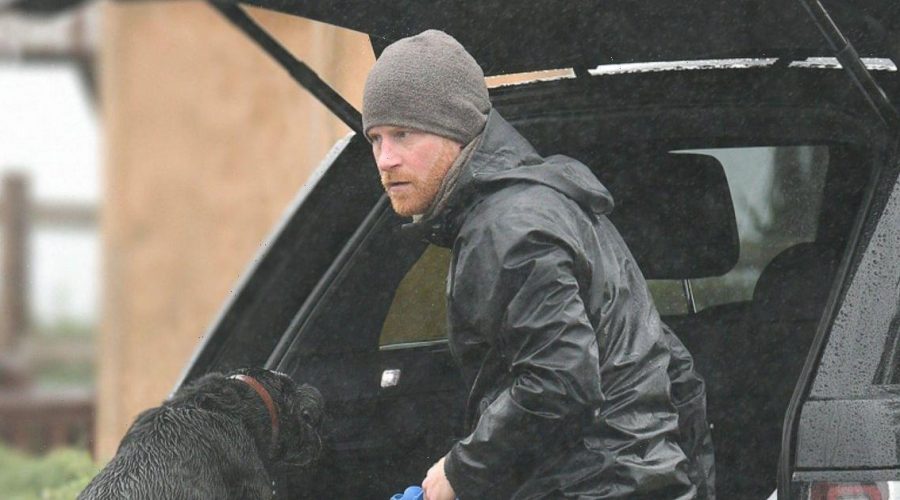 Prince Harrywas stony-faced as he was seen for the first time since his bombshell book revelations that have made waves around the world.

The 38 year old prince was seen out walking his and Meghan Markle's black labrador, Pula, in the pouring rain in California, at a public beach near to the Montecito home he shares with his wife and two children.

The Duke of Sussex dressed down for the wet dog walk, wearing a black waterproof jacket and jogging bottoms, a grey beanie hat and green wellingtons, as he opened the boot of his car so the sodden dog could jump in.

Harry's face told a thousand words as he bore a scowl, looking like he was deep in thought, before no doubt heading back to the family home.

If he was, it's perhaps no wonder, as the bombshell revelations from his new memoir,Spare, have had jaws dropping since excerpts were leaked prior to the book's official release date on 10 January, after it was published days early in Spain.

When the book was announced, it promised to tell Harry's story, from his perspective with "raw, unflinching honesty," and the bombshells revealed so far show that the prince certainly hasn't held back.

One of the many claims Harry made, in leaked extracts obtained by The Guardian, was to accuse his brother, Prince William, of "physically attacking" him in a row at Harry's London home in 2019, where Harry alleges William "knocked" him to the ground and called Harry's wife Meghan "rude", "abrasive" and "difficult."

Harry also claims that King Charles begged him and Prince William not to "make my final years a misery" in a desperate attempt to reconcile them following the funeral of Prince Phillip in April 2021.

In another leaked extract, Prince Harry accuses his father, King Charles, of telling him that his wife Meghan Markle "wasn't welcome" to Balmoral on the day the late Queen died, after her immediate family scrambled on a jet to get to her bedside.

Prince Harry arrived to Scotland alone more than three hours after his beloved Grandmother, the Queen's death, and in his memoir he recalled going to her bedside following her passing.

He said that Princess Anne led him to his grandmother's bed, where he said his last words to the late monarch, to whom he had been so close.

He said: "I stayed in one place without moving, gazing at her for a long time, gathered strength and continued going forward."

The Duke then recalled how he "whispered to her that I hoped she was happy and that she was with grandpa".

In further shocking revelations from the book, Harry goes into graphic detail about losing his virginity, aged 17, to an older woman, as well as his drug use back in his younger years, and even admitting how many members of the Taliban he had personally killed during his time serving in the British Army in Afghanistan.

Harry is now set to speak out all about his upcoming book Spare in an interview with ITV's Tom Bradby, which is due to air this Sunday, 8 January.