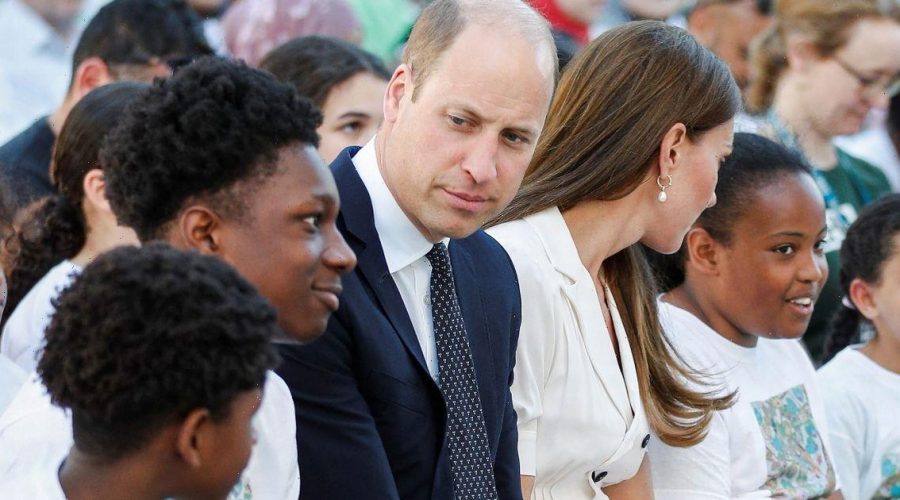 Kate Middleton and Prince William showed their supportive side as they arrived at today's memorial service, Tuesday 14 June, to mark five years on from the Grenfell Tower fire.

The tragedy occurred in 2017 and took the lives of 72 people after a fridge set on fire in one of the flats, and rapidly spread to several others.

Ahead of the service that has taken place at the foot of the tower, The Duke and Duchess privately met with survivors of the fire and those who lost loved ones.

Kate, 40, was seen wearing a white dress for the service as William, 39, paid his respects in a suit and tie.

The mood was a sombre one as the Duke and Duchess of Cambridge were seen sitting amongst others who also attended the service to pay their respects.

Kate and William were photographed chatting to those sat next to them at the event and held onto programmes which laid out details of the multi-faith ceremony.

The multi-faith memorial service consisted of prayers, readings and choir performances, followed by the Royal couple taking part in the laying of wreaths and flowers to pay tribute to the 72 residents who lost their lives during the fire.

The event has been organised by Grenfell United, which works to provide pastoral care for those affected and advocate for families to ensure that such a tragic event is not repeated. The organisation – which was created days after the tragic fire – previously held memorial services outside the Tower site in 2018 and 2019 and facilitated individual visits to the site for the bereaved and survivors during the pandemic to lay flowers and take time to pay their respects.

Kate and William previously accompanied Her Majesty The Queen, 96, to meet those affected by the fire in June 2017, including local residents, members of the community and emergency responders.

The Duke and The Duchess most recently met Grenfell survivors during a visit to mark the launch of the National Emergencies Trust, of which The Duke is a patron, in November 2019. The latest visit is the second memorial Kate and William have attended of late after they were seen at the opening ceremony of the Glade of Light memorial set up in honour of the victims of the Manchester bombings last month.

The Royal couple previously visited the city’s cathedral in May 2018, as they attended the national service of commemoration there on the first anniversary of the attack carried out by Salman Abedia which saw 22 people killed at Ariana Grande's concert.

William gave a short speech as he spoke of understanding the grief the families were going through as he referenced losing his mother Princess Diana. "As someone who lives with his own grief, I also know that what often matters most to the bereaved is that those we have lost are not forgotten," William said.

"There is comfort in remembering. In acknowledging that, while taken horribly soon, they lived. They changed our lives. They were loved, and they are loved.

"It is why memorials such as the Glade of Light are so important. Why Catherine and I so wanted to be amongst you today."