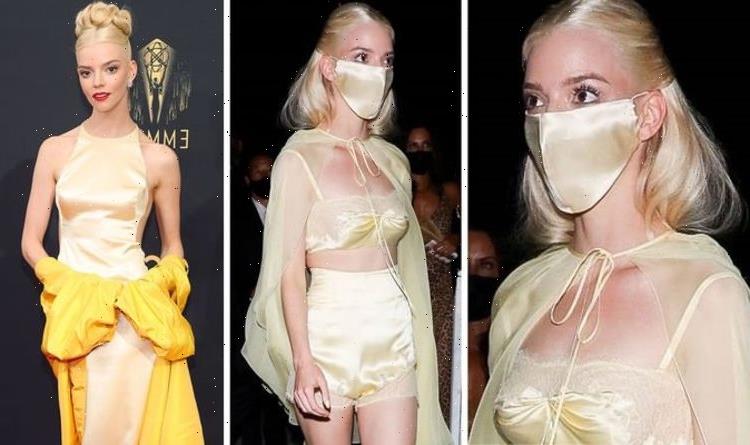 The Queen's Gambit: Anya Taylor-Joy stars in trailer for series

Anya Taylor-Joy certainly knows how to make a style statement. The actress, who is best known for playing Beth Harmon in The Queen’s Gambit, was snapped leaving an Emmys after party in what appeared to be a silk and lace negligee.

The 25-year-old put on a leggy display following the star-studded awards ceremony in a pair of silky yellow shorts, which she teamed with a matching bralet.

A sheer cape in the same colour added a touch of drama to her look.

The actress, who was nominated for an award at the Primetime Emmy Awards 2021, finished off her outfit with a pair of pointy heels and a face mask in a similar shiny fabric.

She was snapped leaving the Sunset Tower Hotel in Los Angeles after her night out.

Earlier in the evening, Anya wowed on the red carpet in an incredible Christian Dior Haute Couture look.

The Peaky Blinders star opted for a cream figure-hugging silk gown with a dramatic yellow shawl.

She swept her hair into an elegant up ‘do and enhanced her natural good looks with glamorous make-up, including a slick of red lipstick.

Anya was nominated for the Outstanding Lead Actress in a Limited Series or Movie accolade but lost out on the night to Kate Winslet, 45.

She picked up the gong for her role in HBO series Mare of Easttown.

Also in the category was I May Destroy You, The Underground Railroad and WandaVision.

The seven part miniseries also won a directing accolade and as well as a host of trophies at the Creative Arts Emmy Awards, which took place last week.

At last night’s event Anya posed for pictures with the cast of the show.

She could be seen smiling for the cameras alongside Marielle Heller (Alma Wheatley) and Moses Ingram, who played Jolene.

The latter was nominated for the Outstanding Supporting Actress in a Limited or Anthology Series or Movie award.

The Crown was also a big winner at the star-studded award ceremony last night.

Josh O’Connor won Lead Actor and Olivia Colman Lead Actress for their roles as Prince Charles and the Queen.