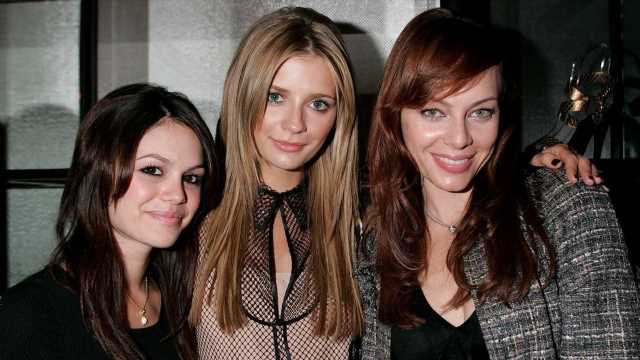 Rachel Bilson and Melinda Clarke are speaking out about Mischa Barton’s recent comments regarding her shocking exit from The O.C. During a sneak peek of a future episode of their podcast, Welcome to The O.C., B**ches!, the O.C. co-stars addressed Barton’s interview, during which said she felt “unprotected” during the making of the show.

Barton starred on the series from 2004 to 2006, before her character, Marissa Cooper, was killed off during the season three finale. Meanwhile, Bilson played Summer Roberts, Marissa’s best friend, and Clarke starred as Julie Cooper, Marissa’s mother, through the show’s finale in 2007.

On the podcast, Bilson said that she and Clarke decided to address Barton’s interview “in hopes that Mischa would hear us talk about it and would be willing to come join us on the show, so we could hear her entire perspective and what she is saying that she experienced.”

While both Bilson and Clarke said they were eager to hear Barton’s side of the story, the former actress admitted to initially being confused by their former co-star’s comments.

“Melinda and I were talking immediately after it came out and we were like, ‘Wait, what?'” Bilson said.

One thing that left Bilson questioning her former co-star’s comments was when Barton claimed that the idea for Marissa’s death “started pretty early on because it had a lot to do with them adding [Bilson] in last minute as, after the first season, a series regular and evening out everybody’s pay.”

“The one thing that I can say, is that in one of her first comments she says that I was added last minute after the first season, which is completely false and not what happened,” Bilson said on the podcast. “So it starting out that way, I was like, ‘Well, that’s misinformation. Where are we going with this and what is she trying to say?'”

Clarke backed up Bilson’s comment, noting that she and the younger actress “were originally going to be series regulars during the pilot.”

“They do that because they see a future for these characters,” Clarke said. “But the powers that be said, ‘No. You’re going to have to wait. They’re going to have to be guest stars for the first 11 episodes,’ and then on the back nine we became series regulars. So that was a little perplexing.”

Bilson also addressed Barton’s saying that people on set were “very mean” to her, and that there was “general bullying from some of the men on set.”

“I did not either,” Clarke agreed. “Everyone has their own experience. To me, I couldn’t wait to get to work. It was like going to musical theater camp. I just loved being there.”

Though Clarke hesitated to comment on someone else’s experience, she did speak to the pressure that Barton, and the rest of the young cast, must have felt while making the show.

“Someone who’s 16, 17, 18, that amount of hours of work, pressure, at such a young age, at best you’re exhausted, and at worst it’s overwhelming and chaotic. It kinda breaks my heart a little,” she said. “We knew there was a lot of pressure on her, but if it really was that bad of an experience, that’s not right for any young person.”

Even given that, Clarke said that some of Barton’s comments “were very perplexing to me.”

“I don’t know what the truth is about that,” she said. “I do know that, yes, this was an enormous amount of pressure for her and for everybody.”

Clarke later expanded on the “scrutiny” young stars faced during the height of The O.C.

“Just by being out there somehow it got turned against them. We’re finding out it may have been quite a toxic environment,” Clarke said. “… I think it’s something that we’re all becoming aware of and it’s important for us to learn in our culture what can be very damaging to young people… Hollywood is notorious for doing 18, 20 hour days. It’s not for the faint of heart, let’s put it that way. Being that young, I do think it can be an additional stress.”

“… When a human being is the star of the show, and you are working incredibly long hours, and you’re the it girl, and everyone wants a piece of you, and the paparazzi wants you, and you have agents and managers telling you, ‘You’re getting offered all of these movies and because you’re on the show you can’t take these offers,’ what do you do with all of that? How do you process all of that without feeling like you don’t have freedom to do what you want?” Clarke added. “Maybe this show is a grind… We can only imagine that it was overwhelming.”

Barton’s interview wasn’t all negative, something that added to the confusion for Bilson.

“I mean, come on. She was clearly having fun. This episode she was making out with Ben McKenzie. What could be so wrong?” Bilson questioned of the actor who played Ryan Atwood, Barton’s O.C. love interest.

“She did,” Bilson agreed. “So it’s kind of mixed messages.”

Even with the confusion, both Clarke and Bilson said they want to welcome Barton on to their podcast.

“Rachel and I both think it’s really important if she wants to come and talk to us and share her story, we would love to explore that,” Clarke said, with Bilson agreeing, “I would actually like to talk to her and find out what her experience was from her perspective, because I saw things a little differently.”