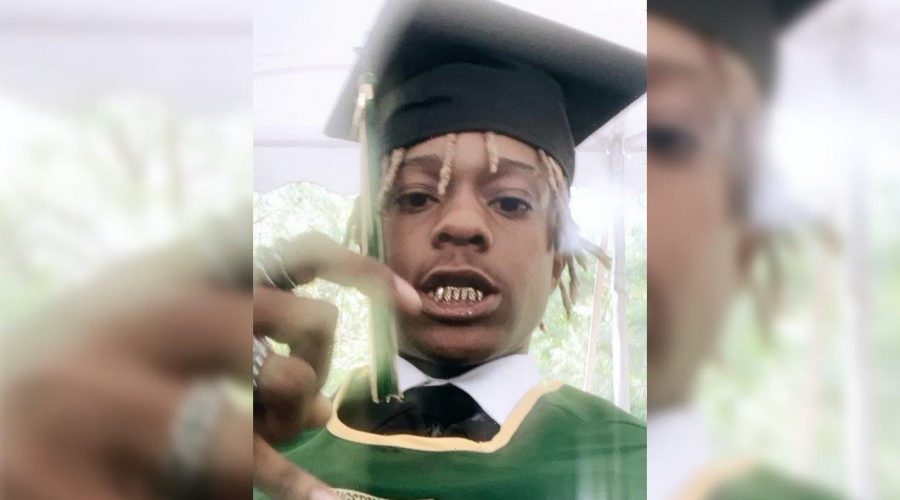 The 18-year-old MC, who just recently signed with Migos and Lil Yachty’s label home Quality Control, was reportedly being held in jail for inciting a riot and disorderly conduct.

AceShowbiz –Metro Marrs had a run-in with the law over his recent stunt. After making it rain $10,000 in cash at his graduation ceremony on Friday, May, 21, the “Bye Felicia” spitter was taken into police custody.

In a video surfacing online, the 18-year-old MC could be seen pulling out wads of cash from his pants on the stage and throwing the bills in front of his fellow graduates. While his pals were thrilled, Langston Hughes High School officials were reportedly not happy with it.

Marrs was then grabbed and escorted by on-sight police officers. TMZ reported that he was held in jail for several hours and was charged for inciting a riot and disorderly conduct. Luckily, he was released despite getting ticketed for the offense.

Before Marrs got freed from prison, his management team posted a clip of him during his arrest. “#freeme y’all tag @theshaderoom in the comments #classof2021 I love yallll!! (This his management team) #freemetro he will get out in a couple of hours,” so read the caption.

Marrs, who just recently signed with Migos and Lil Yachty‘s label home Quality Control, claimed that his move was a form of giving back to his school as he felt some of his classmates may not even receive money for graduation. He also told The Shade Room that he waited until every student walked and had their moment before throwing the money, so he did not steal the spotlight.

“I was creating a moment that would be memorable,” the rapper, whose real name is Marques Smith, pointed out. “I had to do that for the last time. Everybody was lit! We graduating high school!”

While the school might be a bit upset with his stunt, Marrs claimed it has been quite supportive of his success. “They root for me, they’re on my side,” he explained. “They’ve seen me develop (as an artist) while I was in school. I’ve been doing music since 9th grade.”

27/05/2021 Celebrities Comments Off on Rapper Metro Marrs Taken Into Police Custody for Making It Rain $10,000 at His Graduation Ceremony
Lifestyle