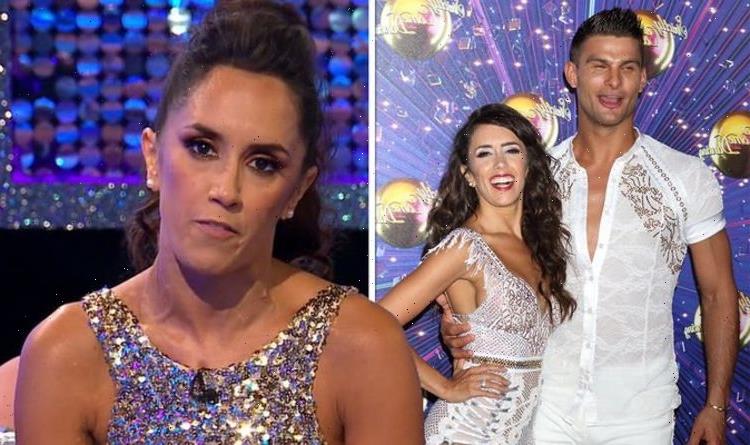 Strictly: Janette reacts to finding out Aljaz will be on It Takes Two

Janette Manrara appeared on BBC Two earlier today in her first solo appearance on It Takes Two. However, the former Strictly pro couldn’t resist a cheeky jibe at her husband Aljaž Škorjanec at the end of the show.

Janette was introducing what will happen on tomorrow’s show as she made the joking admission about her husband.

As the credits rolled earlier tonight, the 37-year-old dancer said: “That’s all we’ve got time for tonight.

“Join me tomorrow at the same time, same place when Vicky Gill will be bringing us some sparkle to the studio.

“And I’ll be joined by Rhys and Nancy, Adam and Katya and Sara and Aljaz…

“Really guys? On my first week, you’re bringing him in?

“I get him enough at home!”

Janette then joked to the producers: “It’s fine.”

The dancing couple tied the knot in 2017 as they celebrated with three weddings.

Elsewhere, Janette opened up about hosting the show solo on her Instagram.

Taking to her stories, she said: “First ever solo show on It Takes Two and it went well I think.”

The professional dancer continued: “I was nervous today but my professional family, like Oti, Karen, Gorka and Giovanni, were here.

“They were so supportive and it was amazing, I loved it.”

Earlier this week, Aljaz shared his support for his wife Janette in a touching post.

He shared a photo of her as she began her stint hosting the BBC spin-off show.

He penned: “A proud husband day… it is my Janette’s first @bbcstrictly It Takes Two show today!

“I will be watching it with tears of joy in my eyes.

“Go and smash it BUCKA. Love you so much and so proud of you! @jmanrara #strictlycomedancing #strictly.”

Aljaz is currently appearing on the latest series of Strictly Come Dancing.

He’s partnered with Dragon’s Den star Sara Davies but the pair failed to impress in their first week as they were placed bottom of the leaderboard.