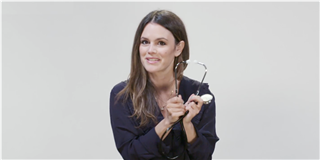 It helps to have friends in high places — and it doesn't get any better than being BFFs with the real-life (well, sort of) Gossip Girl. In the newest episode of InStyle's Let's Unpack That video series, Rachel Bilson explained that she nabbed her cameo on the iconic teen drama (something she's very familiar with from her time on The O.C.) thanks to a close friendship with Kristen Bell — and that they're still close.

"I was working on a show called Hart of Dixie and she came to the set and while we were filming a scene, we literally just took like 20 minutes and Kristen and I shot this on the set of Hart of Dixie," Bilson said as she held up a photo from her time alongside Bell on the Upper East Side. "Kristen and I have been friends for a really long time, it was really fun to actually film something with her, because we've done a lot of things in life together, but we've never worked together prior to this Gossip Girl cameo, I think. I think that's right."

Bilson, who is currenty co-hosting a podcast about The O.C. with her co-star Melinda Clarke, who played iconic TV mom Julie Cooper, went on to say that she'd love a cameo on Curb Your Enthusiasm alongside Larry David, who she calls the "love of her life."

In addition to recalling her time alongside Bell, Bilson's bag offered up memories of her time in fictionalized Orange County and her cast mates, who she said she's getting reconnected with thanks to the podcast, Welcome to the O.C., Bitches. Past episodes have included Peter Gallagher, Tate Donovan, and Kelly Rowan, who played the parents on the show alongside Clarke. So far, Bilson hasn't managed to snag professional brooder Benjamin McKenzie or her ex-boyfriend Adam Brody, but she's optimistic that they'll come around when they've got some free time to walk down memory lane with her.

25/08/2021 Celebrities Comments Off on Remember When Rachel Bilson Was on Gossip Girl?
Lifestyle