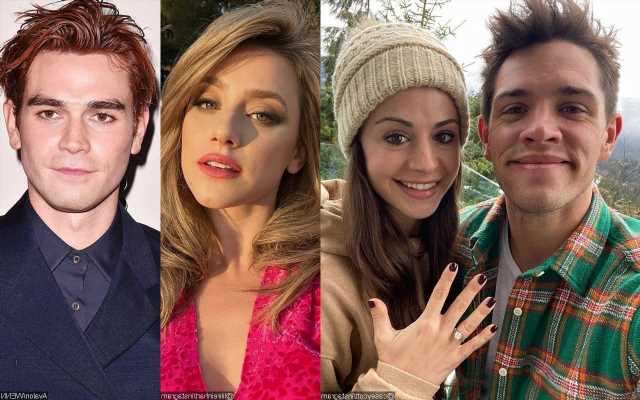 The actor portraying Kevin Keller on The CW teen drama series ties the knot with his longtime girlfriend Nichola Basara in a ‘small’ wedding attended by his castmates.

AceShowbiz –Casey Cott is officially a married man. The actor portraying Kevin Keller on “Riverdale” tied the knot with his longtime girlfriend Nichola Basara in Canada. Among the guests attending his wedding were his castmates.

The 29-year-old The CW star exchanged his vows with Nichola on Saturday, December 18. To celebrate their big day, the actor looked dapper in a classic tuxedo, while Nichola donned a white sleeveless ball gown. The newlyweds were also surrounded by their nearest and dearest, including his “Riverdale” co-stars Camila Mendes, Madelaine Petsch, Vanessa Morgan, KJ Apa, Lili Reinhart and Drew Ray Tanner.

Casey shared the exciting news on his Instagram Story with a black-and-white photo of himself showing off his wedding band as he romantically kissed his wife. Several of the cast members also posted footage of the couple’s wedding day.

“Congrats KJ,” Drew cheekily captioned a video of the “Songbird” actor seated at the reception. He later uploaded a clip of the bride and groom walking arm-in-arm into the venue, writing, “And of course to Casey Cott and Nichola Basara. love you guys.”

In the meantime, Camila and Madelaine posted photos and videos of themselves getting dolled up for the wedding. In one image, Madelaine prepped her skin with a face mask. Later in the evening, Lili also snapped a selfie with Vanessa at the event.

Taking to her Instagram account, Vanessa documented a video of herself, Lili, Camila and Drew singing Bob Marley and The Wailers‘ 1978 reggae classic, “Is This Love”. Vanessa also posted a snap of herself and KJ Apa’s “wife” Clara Berry. She captioned the picture, “Moms night out while Riv & Sash are asleep!”

Not stopping there, Lili made a TikTok video to commemorate the special day. The “Hustlers” actress shared a clip, which was recorded in 2018, that saw Casey telling her, “Find my wife.” She later added footage from Casey’s wedding and captioned the post, “He found his wife [red love emoji].”

In August, Casey shared insight into his wedding day during an interview with Us Weekly. At the time, he explained that the ceremony would “be rather small” due to the ongoing coronavirus pandemic. “My family lives in the States, obviously, and her family, they’re Canadian,” he told the outlet. “So we’re hoping the border [situation] works out and everyone can pop up here.”

Casey also unveiled that his brother, Broadway star Corey Cott, would officiate the wedding. “He’s going to marry us, which is really cool. So we’re really excited that he’s going to be very involved,” he raved. “We’re really close with all of our siblings, and we figured that’d be a good role for him. And he always knows your role when he gets cast. So we cast him.”

20/12/2021 Celebrities Comments Off on Riverdale Star Casey Cott Gets Married in Canada With Lili Reinhart, KJ Apa and More in Attendance
Lifestyle