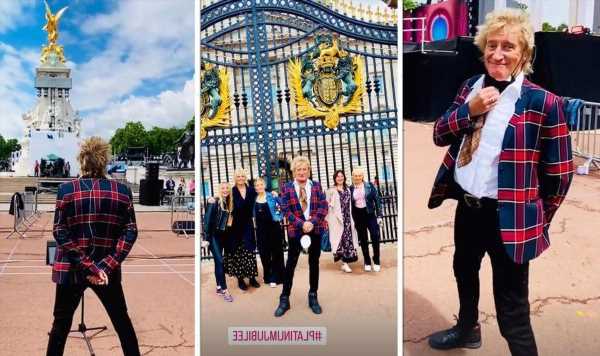 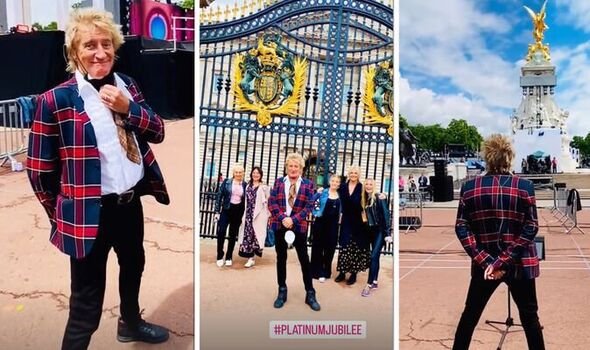 Sir Rod Stewart took to Instagram yesterday to share a snap of his family in front of Buckingham Palace ahead of the Queen’s Jubilee Celebrations. The singer, 77, posed front and centre of the snap while his family stood smiling behind him.

Rod posed in front of the gates while his wife Penny Lancaster could be seen smiling in the background.

The star captioned the story “sound check” ahead of his performance at the royal venue later in the week.

Rod is set to perform at the Platinum Jubilee concert on June 4 which will celebrate the monarch’s 70 years on the throne.

The Maggie May hitmaker looked dapper in a pair of tight-fitting black jeans and a red and blue checked jacket, white shirt and scarf tied around his neck.

He also shared a clip of himself rehearsing in front of the Palace with two of his backing dancers, much to the amazement of passing Londoners.

Addressing the Jubilee concert, Rod said: “Queen Elizabeth has given incredible service to the United Kingdom over the last 70 years and I’m delighted to be able to join her in celebrating her Platinum Jubilee with the Party At The Palace.

“She has demonstrated to the world what a special person she is and how lucky we are to have her. This will be a momentous occasion.”

Rod Stewart stood by the microphone to watch the rehearsals

Rod Stewart performed his hits at the London landmark

Rod Stewart looked out as he performed infront of Buckingham Palace

Rod Stewart cut a smart figure in the dress rehearsal