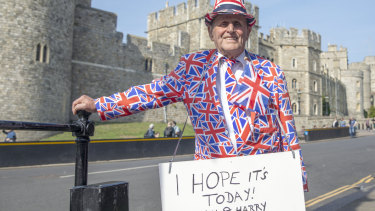 Royal fan Terry Hutt waits for the birth of The Duke and Duchess of Sussex’s first child.Credit:PA Wire

London: Hundreds of royal fans have descended upon the streets of Windsor as the excitement for the arrival of Baby Sussex intensifies.

Scores of enthusiastic observers, including a self-proclaimed town crier, have stationed themselves outside the grounds of Windsor Castle over recent days amid speculation that the birth is imminent. 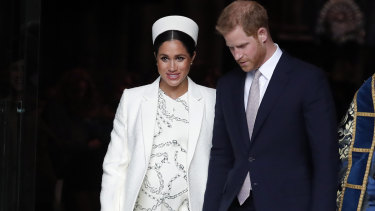 Meghan, the Duchess of Sussex, said the baby was due late April early May.Credit:AP

Union jacks, royal posters and themed outfits are common sights in the picturesque market town in Berkshire, where some royalists have been waiting for an update from the palace for weeks.

John Loughrey, 64, has set up camp across the road from the Royal residence with a sleeping bag and decorated a guard rail with a US flag in a reference to the Duchess’s nationality. The royal superfan, dressed in a Union Jack themed outfit, said he would celebrate the birth with fish and chips, a slice of American pie and a glass of champagne.

“I’ve got a sleeping bag. I’ve been here since May 1. I’m hearing the rumours that Baby Sussex has already been born. To be honest, I’m hoping that’s not the case because Her Majesty wouldn’t like that, she wants to be loyal to her subjects.

''I want it to be a healthy baby, a healthy mother and I don’t mind if it’s a boy or a girl. It should be announced here at Windsor Castle.”

Buckingham Palace’s decision to cancel The Duke of Sussex’s visit to Amsterdam because of “logistical arrangements” left supporters wondering what was happening behind the palace walls. The Duke, who terminated the trip to Amsterdam just two days after it was announced, is now free to support his significantly overdue wife. 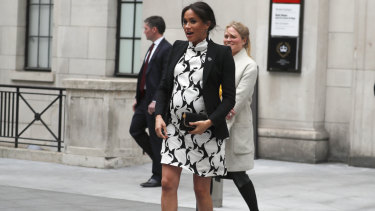 Meghan, Duchess of Sussex, has shown plenty of flair in her maternity style.Credit:AP

The 37-year-old reportedly revealed that she was due at the end of April or early May during an engagement in Birkenhead earlier this year. But the couple have kept the details around the birth private, with aides saying they hope to announce when the duchess has gone into labour followed by details of the baby’s sex and weight later.

Nonetheless, wellwishers have travelled from across the world to congregate at the gates of the royal residence in anticipation of an official declaration.