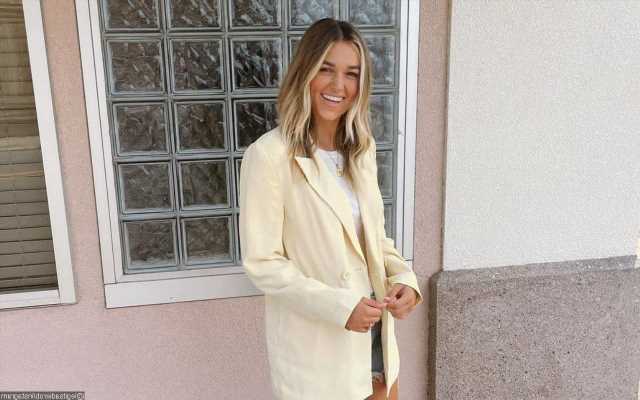 In her lengthy message, the former star of ‘Duck Dynasty’ reveals that she still has skin bumps on half of her body after giving birth due to ‘a new allergy triggered by a stressful labor.’

AceShowbiz –Sadie Robertson is not letting haters get her down. The former star of “Duck Dynasty” didn’t waste time to clap back after she received a harsh message from a fan who unfollowed her on her social media platform for showing her post-baby body.

“I rarely read my dms but recently I did. The first DM I opened was from a mom who felt I should know that her & her daughters were unfollowing me. Which is totally fine to unfollow me, but it was WHY that got me,” the reality star wrote on her Instagram page on Sunday, August 22 alongside images of herself one month pregnant a year ago and of herself now, after welcoming her baby daughter Honey James. “She went on to say that it is bc of how much I brag & flaunt my body & how hard it was for her to see my body after giving birth ‘bounce back.’ “

Sadie continued, “I thought about how I could’ve told her that I didn’t ‘bounce back’ how you may perceive outwardly.” The 24-year-old star, who tied the knot with husband Christian Huff in 2019, added, “I could tell her about parts of me that haven’t healed yet. I could tell her about the bumps that I still have covering half of my body since birth bc of a new allergy triggered by a stressful labor. I could’ve told her things my doctor has told me, & the counselor i saw helped me through. I could’ve told her how a lot of things I don’t tell people, but I didn’t.”

Sadie also pointed out that her life is “not defined by [her] body and especially not the negative things [her] body is faced.” She further stressed, “Because tbh it’s done some awesome things this year. i’d rather document! So i post the good mostly.” She then questioned, “Does that mean I’m bragging? That is certainly not my intent. I just feel as though we have better and bigger things to talk about.”