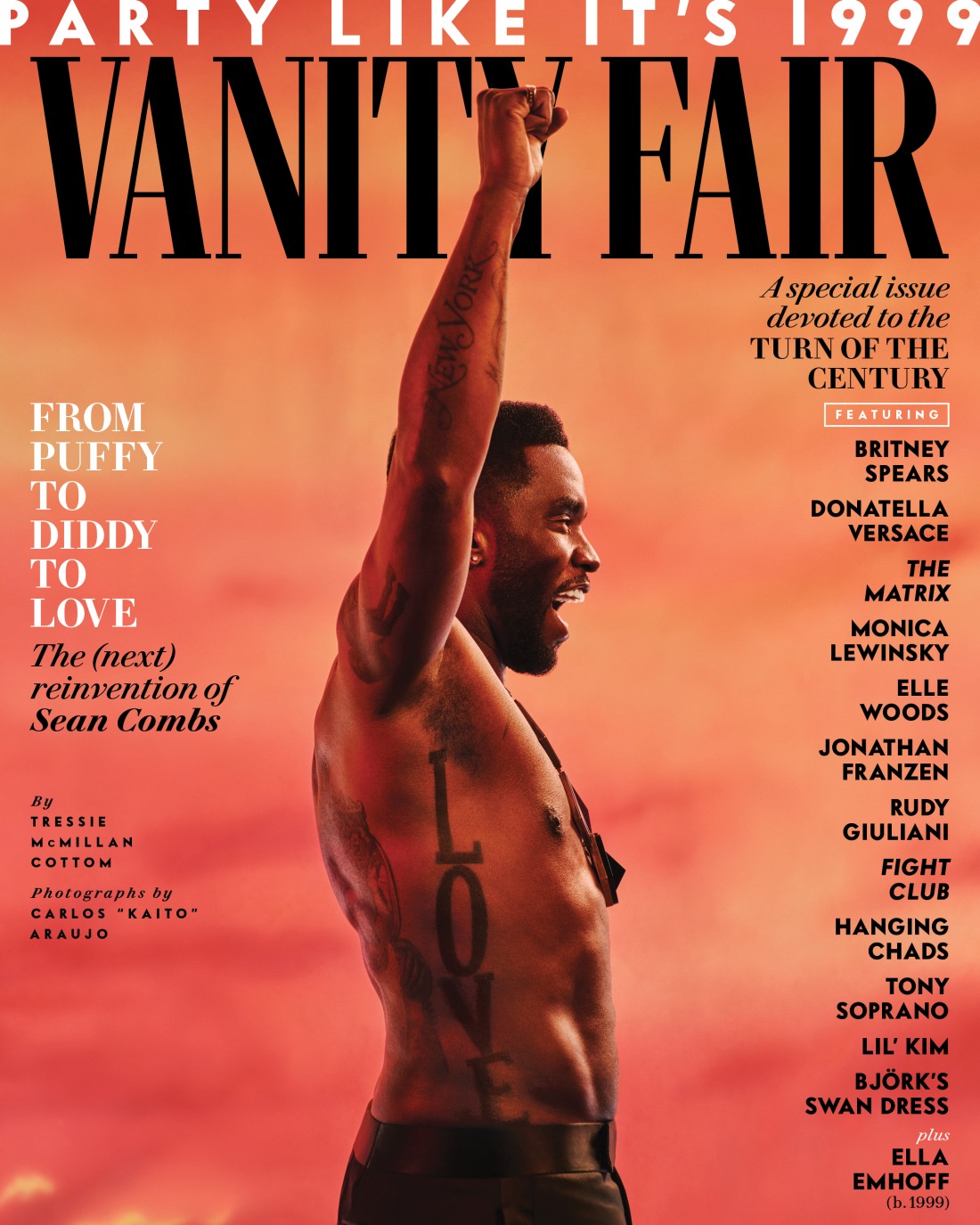 Vanity Fair’s September cover is: Sean Combs. Puffy. Diddy. Or his new era: Love. Love Combs. Sean Love Combs. It might feel a bit dated and God knows, I can go weeks without thinking about him, but VF makes the case that Sean was one of the first major “brands” of the celebrity era, that his successes have been multi-platform, industry-changing and profound. The VF piece is about both Combs’ history and his future goals. He says he’s come back to God and God wants him to start making bigger changes, social changes, economic changes. You can read the full piece here.

Love on his mind: “I am the happiest I’ve ever been in life, I laugh the most, I smile the most, I breathe the most.”

The end of the Puffy era: “Puff Daddy had just got through East-West war. Nobody wanted to get in the room with me. They thought they was going to get shot.” That is when Combs started to think of himself in eras: “When I changed names, I put periods on those eras.”

The death of Kim Porter in 208 & his friendship with J.Lo: Combs describes Porter as the love of his life. His daughters want him to settle down and get out of these streets. He knows what you are thinking, but he says there is no reason to expect a redux of the Diddy-Lopez romance. He and J.Lo are just friends. Of the social media post that set tongues wagging over the summer, he says that it was just a throwback post from a great time in his life. I push him gently on this because the streets want to know. “It wasn’t no trolling involved, that’s just my friend. And I don’t have nothing to say about her relationship or her life.” Over the several hours we spend together at Combs’s home and later on Zoom, it is clear that if any woman was going to tie the renowned playboy down, it would have been Porter. “And so, you know, I had to start to deal with it when I lost Kim. ’Cause I was like, man, you had it. I’m not saying I would do any of it differently. God willing—I would have had more time. I look at my life as I got a second chance. I’m on my second mountain.”

He brings up #MeToo before mentioning Black Lives Matter. “If you living on this earth and you trying to keep on dealing with this sh-t, that ain’t the way we going to live. And people out there that are tired of it. And it’s not just a Black and white thing. You know what I’m saying? It’s just tired of the way that it doesn’t have to be. Like when they said it was over—when they said in the #MeToo, when it was over, it was over. The #MeToo movement, the truth, is that it inspired me. It showed me that you can get maximum change.”

Love Combs’ purpose: “I feel like God sent me, God, put on my heart, ‘What’s your purpose?’ I was looking at all these things, it’s preachers and just different people talking about purpose because I was like, man, purpose is something deep. Have I really found my purpose? I know I’m making money and I’m successful and I’m changing the game so called, but is that my purpose? And then I really prayed on it and God told me, ‘Your purpose is to play a part in saving the Black race.’ And then I immediately, I was like, I need to talk to Harry Belafonte.”

He’s starting a new label: “I’m coming back into music, you know? Yeah, all R&B label, because I feel like R&B was abandoned and it’s a part of our African American culture. And I’m not signing any artists. Because if you know better, you do better. I’m doing 50–50 partnerships with pure transparency. That’s the thing. [The new label is so that] we can own the genre; we don’t own hip-hop right now. We have a chance to—and I’m going to make sure that—we own R&B.”

The VF journalist – Tressie McMillan Cottom – included several funny asides, especially when Combs was talking about how God spoke to him, and all of the stuff about the new label. Apparently, no one on his team knew that he was going to announce that to Cottom and people were freaked out a little. As for the Harry Belafonte thing – what surprises me is that Combs understood that he needed to listen to a wise sage like Belafonte, and Combs is clearly paying attention to what the elders of his community are saying and thinking.

As for the J.Lo thing… literally my first thought when I started reading this was “I wonder if he mentioned Jennifer.” He did! And it’s all good.

13/08/2021 Celebrities Comments Off on Sean Combs: The #MeToo movement, the truth, is that it inspired me
Lifestyle