Catfights, couture & $40m mansions… are you tuned into TV’s guiltiest secret? Selling Sunset, a reality show that follows the fortunes of a group of Los Angeles estate agents, has become a surprise hit in the UK, writes ALISON BOSHOFF

Featuring cosy cottages, middle-aged couples on the edge of retirement and modest budgets, let’s just say that primetime television material it is not.

So you would think that the British public would likely take a bit of persuading to turn their eyes to a show starring American estate agents.

And yet, occupying the No5 slot on Netflix in the UK is Selling Sunset, a reality show that follows the fortunes of a group of Los Angeles realtors. 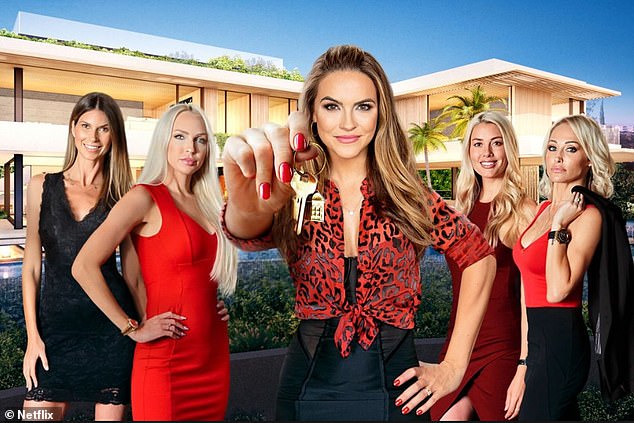 Selling Sunset, a reality show that follows the fortunes of a group of Los Angeles estate agents (pictured), has become a surprise hit in the UK

Full of feuds, glamour, and eye-poppingly gorgeous houses that cost more than the average British family will earn in a lifetime, the decadence of this reality show is outshone only by the jaw-dropping bitchiness of its stars — the staff of the deluxe estate agency The Oppenheim Group.

The undisputed star of the show is ‘gothic Barbie’ Christine Quinn, who combines outrageous one-liners with preposterously vulgar designer outfits (4 ft platinum ponytail and buttock-revealing panelled dress anyone? You certainly don’t get that in Foxtons on London’s King’s Road).

For the millennial fans of the likes of Love Island — and their mothers — it has proved to be an irresistible combination and, as Susanna Reid admitted in her Daily Mail column yesterday, Selling Sunset is now the show to watch.

And Netflix has done everything it can to keep viewers hooked, releasing three seasons of the show between March 2019 and May this year — with a fourth on the way. It has been the perfect lockdown binge for bored Britons stuck at home.

So who are the stars of the hit show — and do they actually sell any of those gorgeous houses? Here, we present the essential guide to what critics are calling ‘the pandemic’s best cultural remedy’. 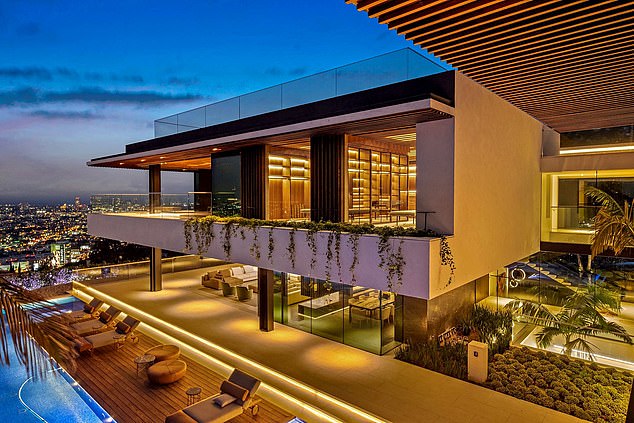 Full of feuds, glamour, and eye-poppingly gorgeous houses that cost more than the average British family will earn in a lifetime, the decadence of this reality show is outshone only by the jaw-dropping bitchiness of its stars

The show centres on an estate agency founded by Jason Oppenheim and his twin brother, Brett.

The two 43-year-olds, who are said to be worth $50 million (£38million), favour shaved heads and sharp suits and, at 5ft 6in, are considerably shorter than their Amazonian ex-model staff.

Their team compete to get the best listings and to show them to clients.

Both men apparently deplore the constant in-fighting among the ‘Charlie’s Angels’ cast (everyone thinks Mary Fitzgerald, who used to date Jason and coparents a pair of chihuahuas with him, gets special favours) and are horrified by some of the office conversations, where nothing, from intimate waxing to love-life dramas, is considered off limits.

Jason has a law degree and worked as a lawyer before going into property. He was recognised in a Wall Street Journal poll as the No1 agent in the Hollywood Hills/ Sunset Strip, No3 agent in LA and No22 Agent in the U.S.. 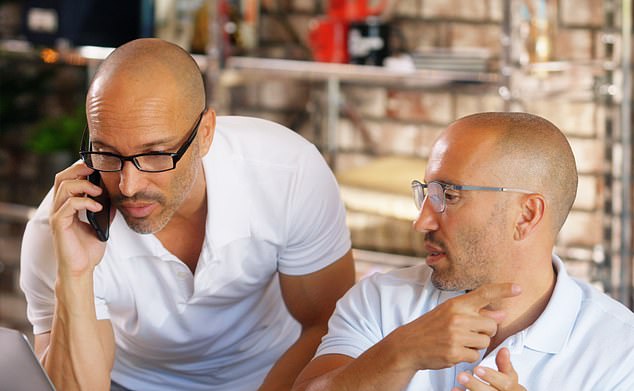 The show centres on an estate agency founded by Jason Oppenheim and his twin brother, Brett (pictured together)

Wholesome Chrishell Stause was well known in America before Selling Sunset, as she had previously starred in three daytime soaps: Days Of Our Lives, All My Children and Mistresses. Raised in poverty in Kentucky, she said that at school she had been known as the ‘stinky’ kid because, at one point, the family was sleeping in a car.

She is known for her sweet smile, pastel dresses and jackets, heavy make-up and perpetually upbeat demeanour — which has led to suggestions that she is ‘fake’.

At one point, she was engaged to Glee actor Matthew Morrison.

But, when series one starts, she is married to actor Justin Hartley, well known for his roles in Smallville and This Is Us, and has moved from acting into real estate. 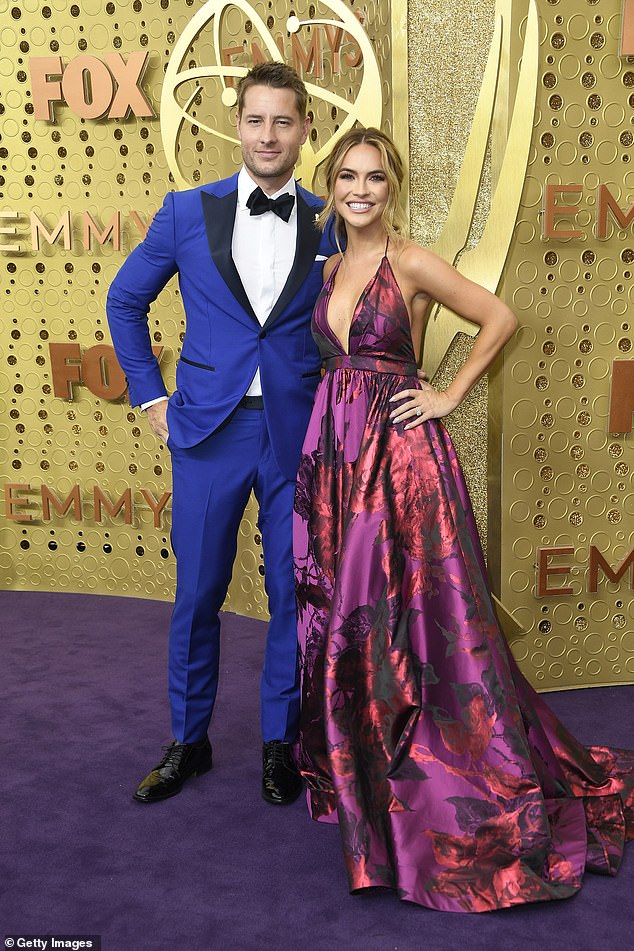 The couple split in November last year (Justin delivered the bombshell by text), with her work rival Christine gleefully alerting the office to the news after it dropped on gossip website TMZ that Justin had filed for divorce.

Chrishell wept: ‘I’m so confused. I just feel stupid. It’s not normal to meet someone and then they become wildly famous or wildly rich but I just feel, God forbid, that’s how you would treat some garbage that you threw out.’

Sources close to her ex-husband said that she had been jealous of his friendships with other women, and added that he deplored having his marriage play out publicly.

RUN FOR THE HILLS

The agency sells property all over Los Angeles — but specialises in the high end, with the most expensive house on their books for sale for a staggering $75million (£57million). The firm says it does ‘tremendous business throughout Beverly Hills, West Hollywood, Bel Air, Malibu and beyond’.

Among celebrities who own property in the area are actor Channing Tatum, singers Beyonce and Jay Z and Guns N’ Roses guitarist Slash. The Oppenheim Group recently took on Orlando Bloom’s house in Beverly Hills, which is for sale for $9million (£6.8million).

The area is home to numerous celebrities and is the location of America’s second most expensive street, where the average price of a property is $16million (£12million).

HOW REAL IS IT?

The series was devised by producer Adam DiVello, who also worked on reality TV shows The Hills and Laguna Beach. Confrontations often take place in restaurants or at parties and are hashed over in subsequently filmed interviews. DiVello swears it is ‘full reality’, not scripted.

Chrishell says: ‘They can sometimes nudge us to address things, but what we say is all us. Beware anyone that says otherwise. Gotta own it.’

DiVello says: ‘I can’t tell you how many hours we would sit in an edit bay just working on one scene. I think most reality shows would have turned it out in a day and we’ll spend a week.’

‘I have mad respect for women in real estate in Los Angeles, I just think that the show is not really about selling real estate. I think it’s about dating bachelors in the Hollywood Hills.’

Whatever the case, there are more fireworks to come. After news that Brett has left Oppenheim to set up his own agency, Christine declared that series four will be ‘the juiciest season ever’.

The first of the three series starts with a wholesome new agent Chrishell Stause starting at The Oppenheim Group.

Christine Quinn looks her over and declares that the amenable young woman who shows up with treats for the chihuahuas is a ‘kiss ass’, and is wearing an ugly dress, too. From then on, it’s open — and hugely entertaining — warfare as Christine drips poison like a modern-day Bette Davis, all Balenciaga, Botox and plastic boobs.

Vintage Christine moments include her going shopping for Louis Vuitton handbags with her fiance’s credit card while he is asleep. 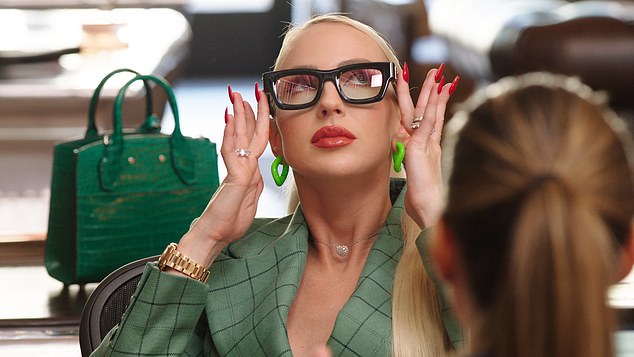 In season three, she marries wealthy tech businessman Christian Richard in a winter wonderland-themed wedding — complete with white and black swans and a black cake with a ‘bleeding’ centre — which is attended by the entire cast.

Originally from Texas, she came to LA to model before qualifying as an estate agent. In an interview this year she said: ‘I can totally dress like a stripper and still be a boss-ass-b***h.

‘Proving people wrong is my favourite thing to do. I’m not a ditzy blonde. I’m really good with negotiating, I’m great with people, I’m very, very business-savvy.’ Now, she wants to launch a Goop-type lifestyle brand.

Homes (and bonuses) to make you gasp…

Fabulous multi-million-dollar mansions with pools, cellars, spas, cinema rooms and staff quarters are the stock-in-trade of the show. The most expensive property which the firm handle is North Beverly Drive, on the market for $75million (£57million).

Davina Potratz is seen struggling to sell this seven-bedroom house, which her boss believes is overpriced and a waste of her time, while developer Adnan Sen chides her for her failure.

One house which did sell is a home in the Hollywood Hills, listed for $44million (£33million), that has 20,000sqft of space, a garage big enough to house 15 cars, 175ft linear pool, sauna, state-of-theart theatre, curated wine cellar, glass elevator, panoramic skyline views and enormous rooftop deck. 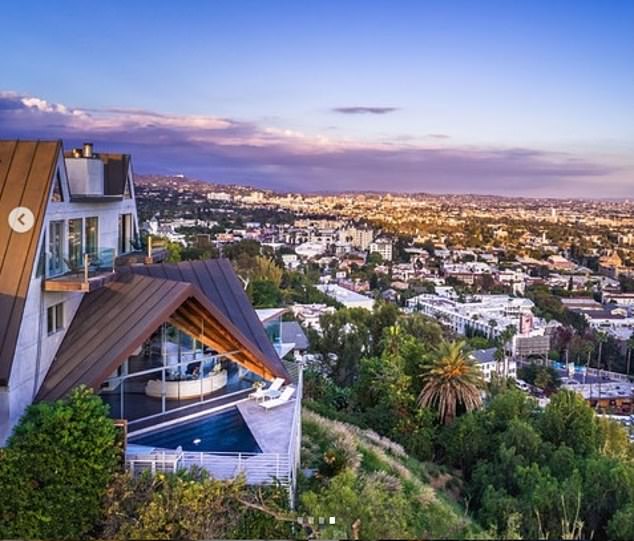 One house (pictured) sold on the show which was in the Hollywood Hills, listed for $44million (£33million), boasted a 20,000sqft of space, a garage big enough to house 15 cars, 175ft linear pool, sauna, state-of-the-art theatre, curated wine cellar and glass elevator

Not weddings — this is war

From the outset, the female stars are in deadly competition — and what better way to assert your dominance than a truly luxurious wedding? On one side, is the traditional.

Mary Fitzgerald, 40, wed 27-year-old French pastry chef-turned-model Romain Bonnet in season two. He is her third husband — her first husband died and she divorced the second.

She was a teen mum, and walked down the aisle in white, accompanied by her son, 22, and her father. 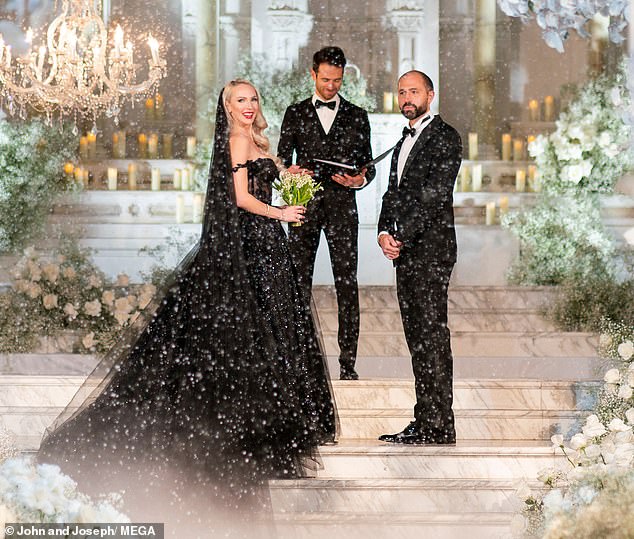 Christine Quinn’s nuptials (pictured) were at a no-expense-spared event included ‘snow’ which fell when the bride, wearing black, came down the aisle, with swans swimming in tiny ponds in the room

The modest and tasteful ceremony took place in the lovely gardens of a house she was selling last October, and she showed a buyer around on the morning of the nuptials — who went on to purchase the property.

Bonnet now works as a project manager for the Oppenheim group. Mary’s wedding contrasts with Christine Quinn’s nuptials, above, which were planned over two months — and came after an engagement party featuring a zebra.

The no-expense-spared event included ‘snow’ which fell when the bride, wearing black, came down the aisle, with swans swimming in tiny ponds in the room. Christine wore red heels signed by Christian Louboutin himself and two dresses which cost £38,000 in total.

Some 2,000 bottles of vintage Dom Perignon champagne were served, plus his-and-hers cocktails called the JFK andthe Marilyn. The bride and groom sat on black thrones.

Boss Jason said: ‘It was just overwhelming…it wasn’t a wedding, it was an event!’

20/08/2020 Celebrities Comments Off on Selling Sunset is surprise hit in the UK, writes ALISON BOSHOFF
Lifestyle