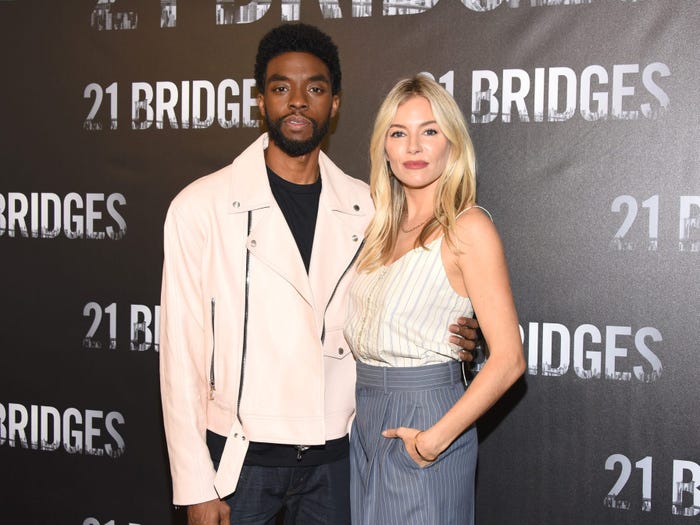 In August, "Black Panther" star Chadwick Boseman died of colon cancer at the age of 43. Many in Hollywood continue to speak out about his legacy.

The August issue of Empire has been completely dedicated to Boseman's life and work, and on Monday it revealed one story inside the pages: a recount by actress Sienna Miller on working with Boseman in the 2019 cop drama "21 Bridges" (in which Boseman was also a producer).

"He produced '21 Bridges,' and had been really active in trying to get me to do it," Miller told Alex Godfry for Empire. "He was a fan of my work, which was thrilling, because it was reciprocated from me to him, tenfold. So he approached me to do it, he offered me this film, and it was at a time when I really didn't want to work anymore. I'd been working non-stop and I was exhausted, but then I wanted to work with him."

Miller said she was having trouble with negotiating her contract for the movie, particularly getting stonewalled when it came to her salary. The 38-year-old actress said Boseman stepped in and took a piece out of his own salary and gave it to Miller so she would get what she was asking for.

"I think it's a testament to who he was," Miller said. "This was a pretty big-budget film, and I know that everybody understands about the pay disparity in Hollywood, but I asked for a number that the studio wouldn't get to. And because I was hesitant to go back to work and my daughter was starting school and it was an inconvenient time, I said, 'I'll do it if I'm compensated in the right way.' And Chadwick ended up donating some of his salary to get me to the number that I had asked for. He said that that was what I deserved to be paid."

Looking back, Miller said it's "the most astounding thing" she has experienced as an actress.

"That kind of thing just doesn't happen," she said. "He said, 'You're getting paid what you deserve, and what you're worth.' It's just unfathomable to imagine another man in that town behaving that graciously or respectfully. In the aftermath of this I've told other male actor friends of mine that story and they all go very very quiet and go home and probably have to sit and think about things for a while. But there was no showiness, it was, 'Of course I'll get you to that number, because that's what you should be paid.'"

Stories of Boseman's generosity continue to spread after his death. The actor was known for interacting with his fans, including paying visits to children's hospitals on his press tours for Marvel movies.

Last week, a mural of Boseman was unveiled at Downtown Disney in California showing Boseman giving the "Wakanda Forever" salute to a young fan wearing a Black Panther mask.

Earlier today, concept artist @Nikkolas_Smith was among the first to see his artwork, “King Chad,” displayed in #DowntownDisney. The art installation pays tribute to ‘Black Panther’ star Chadwick Boseman with the inscription:   “As a former Disney Imagineer, I had the honor of working on a major children's hospital initiative and Avengers Campus as my final two assignments. Seeing Chadwick's heart for people in-person, and later discovering his courageous battle with cancer, I was inspired to create this tribute to honor his life and legacy. To us, he was and will always be T'Challa. Long Live The King.”

A post shared by Walt Disney Imagineering (@waltdisneyimagineering) on Sep 24, 2020 at 10:39am PDT

Sienna Miller's full interview with Empire will be on newsstands Thursday, October 1.