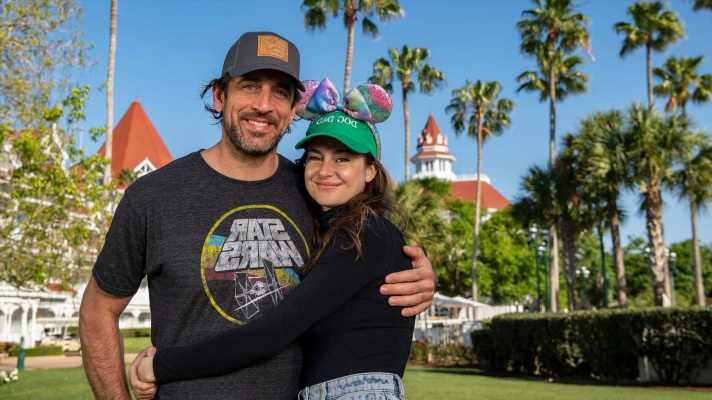 The couple, who announced their engagement in February, look to be enjoying a Hawaiian vacation with Woodley’s former “Divergent” and “The Spectacular Now” co-star Miles Teller and his wife, Keleigh Teller.

“ponds with soulmates,” she captioned several photos of herself, Teller, Rodgers and Woodley, all dressed in swim attire, posing by waterfalls and lush mountains. A video in the slideshow showed the group rappelling down rocks toward rapid waters.

Teller’s wife captioned another picture of their group, “Happiness.”

This is not the first time Rodgers, 37, and Woodley, 29, have traveled together with the Tellers. They were all spotted together at the Kentucky Derby early May.

Rodgers, quarterback for the Green Bay Packers, and Woodley have been making the most of the NFL star’s offseason.

In April, the lovebirds couldn’t stop gushing about each other during an interview with “Walt Disney World Minute” after vacationing at Florida’s Walt Disney World Resort. When asked, “What is one thing that always makes you smile?” Rodgers and Woodley instantly pointed at each other. Awh.

Rodgers announced he was engaged in February while accepting the 2020 NFL MVP award. Although he gave a special nod to his fiancée, he didn’t identify her.

Woodley confirmed her engagement to Rodgers several weeks later during an appearance on “The Tonight Show Starring Jimmy Fallon.”

“Yes, we are engaged,” Woodley told Fallon on Feb. 22. “But for us, it’s not new news, you know? So it’s kind of funny. Everybody right now is freaking out over it and we’re like, ‘Yeah, we’ve been engaged for a while.'”