Late-night host Stephen Colbert opened his Thursday night show to discuss President Trump's speech from hours earlier, in which he warned about voting fraud and attempts to "steal" the election.

The funnyman struck an unusually somber tone throughout his opening monologue, noting that he was "dressed for a funeral" and was heartbroken by Trump's remarks.

"We're taping this just a little while after Donald Trump walked into the White House briefing room actually and tried to poison American democracy," Colbert said, dressed in all black.

"That's also why I'm dressed for a funeral, because Donald Trump tried really hard to kill something tonight. Around 7 o'clock the president came out into the briefing room and lied for 15 minutes, just nonsensical stuff about illegal vote dumps and corrupt election officials and secret Democratic counting cabals… And if you didn't know that Joe Biden was getting close to 270, Donald Trump just provided you all the proof you will ever need."

Colbert said he long predicted this behavior from the president.

"I'm no prophet, it's just that he's so predictable. For weeks, we have been talking about how there would be a red mirage and how all those outstanding Biden mail-in ballots might let Joe catch up. And that Trump would then probably come out around, I don't know, Thursday, maybe evening news time, and he wanted to accuse everyone else of cheating. The guy does not have another gear. Get a new act!"

Colbert played a clip of Trump from 2016 in which he said, "I will totally accept the results of this great and historic presidential election if I win."

"So we all knew he would do this. What I didn't know is that it would hurt so much. I didn't expect this to break my heart," Colbert added. "For him to cast a dark shadow on our most sacred right, from the briefing room in the White House ‒ our House, not his ‒ that is devastating. This is heartbreaking for the same reason that I didn't want him to get COVID — certainly why I wanted him to survive. Because he is the president of the United States. That office means something and that office should have some shred of decency."

Colbert said Trump has left a "stain" on the Oval Office — "and not just from his butt bronzer," he quipped. 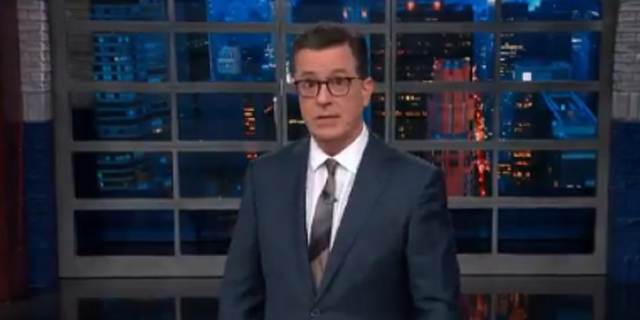 "Everything he did is now in some way presidential behavior," Colbert said.

He then called on Republicans to reject Trump's accusations.

"Right now something unpredictable needs to happen. Republicans have to speak up. All of them," the host said.

Colbert added: "You only survived this up til now because a lot of voters didn't want to believe everything that was obvious to so many of us: that Donald Trump is a fascist. And when it comes to democracy versus fascism, I'm sorry, there are not fine people on both sides so you need to choose Donald Trump or the American people. This is the time to get off the Donald Trump train."

Colbert also blasted Sen. Mitch McConnell, who has so far declined to comment.

"Who is silent gives consent, so Mitch, we heard you loud and clear, you're OK with this," Colbert said.

The host then said his show wouldn't show "a second" of Trump's speech made Thursday, calling the president a "sad, frightened fraud."