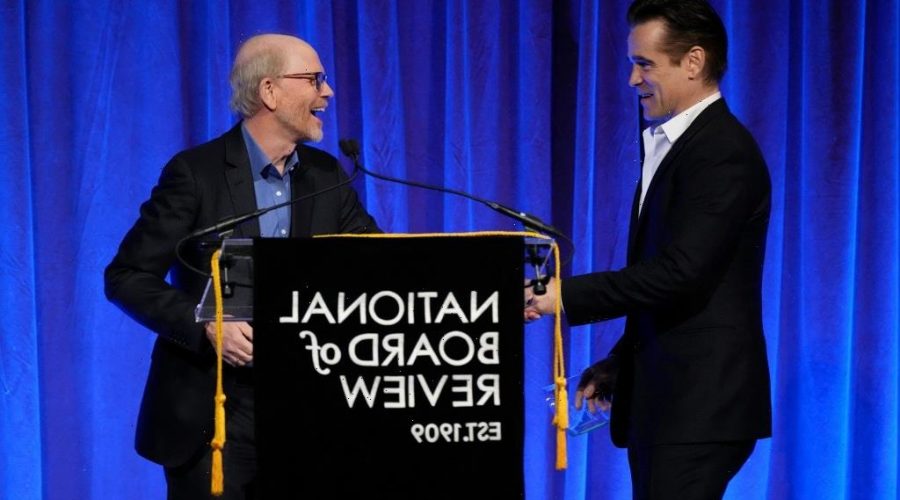 Every film is personal, said Steven Spielberg, “but The Fabelmans was like moving back in with my parents and my sisters. I would walk into the house that [production designer] Rick Carter designed, exactly the spitting image of the house I grew up in in Phoenix, Arizona. Everything in my bedroom from those years wound up on the set. They say you can’t go home again. That’s wrong, I went home every single day.”

“My whole career, my job as I have seen it, is to be the accompanist and conductor to whomever and whatever should be the center of your attention – that could be an actor, a famous book, a big idea, a high concept,” he told a packed and cavernous Cipriani 42nd Street in NYC accepting the Best Director award from the National Board of Review Sunday night. But, “I realized for the first time that I couldn’t take cover behind a mothership or a T-Rex or a big mechanical shark” (as per E.T., Jurassic Park, Jaws) he said of making his autobiographical film.

The event had Top Gun: Maverick director Joseph Kosisnki and cinematographer Claudio Miranda re-living the stress of putting six Imax cameras in an F18 fighter jet and maneuvering an aircraft carrier. The Tom Cruise-starrer won for Best Film and Miranda for Outstanding Achievement in Cinematography. The awards were announced last month.

Michelle Yeoh, NBR Best Actress for Everything Everywhere All At Once, said she was “so incredibly proud to be the first Asian actress in 45 years to receive this honor” in a moving speech about her early career in Hong Kong and the challenge of facing down typecasting in Hollywood. She and Spielberg got the two standing ovations of the night.

The Fablemans helmer said he had worried the highly personal film “might be entering some private labyrinth of memory that means something to me, and wouldn’t mean anything to you. But after 50 years of filmmaking, there’s one thing I am sure about. Never make a movie you are certain about. I go on the set every day feeling like I am stepping off a cliff. And maybe I’ll fly and maybe I’ll fall, but I only know that both the flights and face-plants are necessary and useful and meaningful…and the best shot of staying alive inside our art.”

He gave a shout-out to his younger self in the film, actor Gabriel Labelle, who took one of two awards for Breakthrough Performance, with Till star Danielle Deadwyler. He noted that when he won Best Director/Best Picture from the NBR for Empire of the Sun in 1987, Christian Bale received a special citiation from the org for Best Performance by a Juvenile Actor. “It means a lot to me that both times it’s been for a film in which I have had the rare privilege of introducing a brilliant new actor.”

The Banshees of Inisherin was a big presence at the podium. NBR Best Actor Colin Farrell, introduced by Ron Howard, compared his joy at being an actor to “being a child and falling in love with the night sky, and falling in love with the stars and constellations, and growing up to be an astronaut. I am not conflating actors with astronauts, let’s be clear on that. It’s just [that] something takes a grip on you at such a formative stage in your life the way film took a grip on me [and] allowed me to understand the context of emotion. So that I wasn’t just experiencing my family home, I wasn’t just experiencing the sh-t that I saw in my school, I was seeing so many different lives experienced in so many different ways.”

Howard, who directed Farrell in Thirteen Lives, is a huge fan of Martin McDonagh’s 2008 In Bruges, which also starred Farrell and Brendan Gleeson. He said he’d asked Farrell about a “sequel.” The actor was coy, according to Howard, saying: ‘I just got a script, and it’s not a sequel but Martin is going to get the band back together…It’s a mad little story.’” McDonagh took the NBR award for Best Original Screenplay and Gleeson for Best Supporting Actor for Banshees.

McDonagh thanked Searchlight Pictures and Film4 “for making the film” and – to a burst of laughter from the room — “for giving me absolutely no notes on the script, which is probably why I am here tonight.”

“But that is also one of the reasons why I love coming back to work with you.”

Santiago Mitre’s Argentina 1985 received an NBR Freedom of Expression award, along with Laura Poitras’ All The Beauty And The Bloodshed. The story of how a public prosecutor and young lawyer took on the heads of Argentina’s bloody military dictatorship in the Trial of the Juntas continues to resonate, Mitre said. Growing up in the 1980s, it was amazing “to see real justice unfold in front of my eyes.”

Poitras praised the film in her remarks, saying accountability is critical. Her Venice-winning doc about artist Nan Goldin’s protest against the Sackler family.

“There are people currently within the United States government who authorized torture and yet they have not been named or held accountable. Our country’s failure to seek accountability for crimes and atrocities has also allowed the Sackler family to escape criminal prosecution, despite a mountain of evidence linking them to the unspeakable deaths of countless people in this country,” Poitras said.

“The Justice Department can still bring charges against Richard Sackler, and it must. A country that does not confront its crimes and atrocities is never able to say never again.”

The family, which owned, Purdue Pharma, reached a $6 billion national settlement with the DOJ for its role in the opioid crisis

Tom Hanks Cranks It Up With $4.2M In Week 2 For ‘A Man Called Otto’: Specialty Update