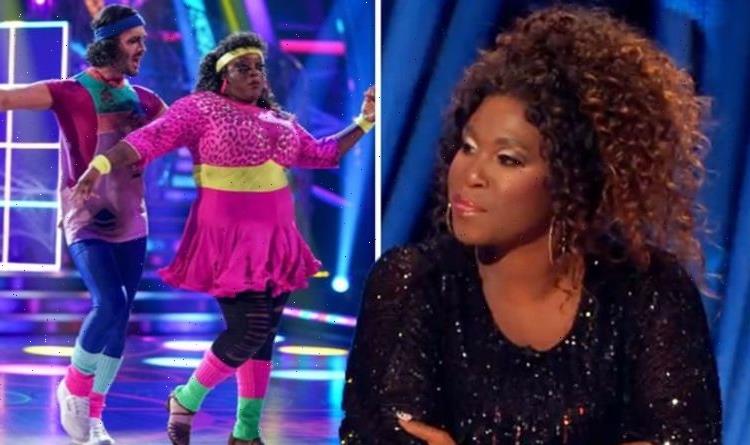 Strictly Come Dancing judge Motsi Mabuse has hit back at claims that the show’s dance-off is rigged, after fans picked up on a blunder during yesterday’s elimination. The 40-year-old reacted to a social media user on Twitter, who suggested the dance professional will “regret” a statement she made in Sunday night’s edition.

Halloween Week saw Judi Love and Graziano Di Prima’s dance journey come to an end, as she was voted out of the competition.

She once again faced the dreaded dance-off as she went up against Adam Peaty and professional partner Katya Jones.

Motsi and her fellow judges – Shirley Ballas, Craig Revel Horwood and Anton Du Beke – were tasked with sending one of the dance couple’s home.

During the show, the mum-of-one said: “Well, I have to say that dance-off was really great.

“The decision was made for me, so I have to say that the couple I will be saving is Adam and Katya.”

Her comments sparked an uproar on social media, with people questioning what Motsi’s remark meant amid claims the show is fixed.

She has since explained that her comments were taken out of context.

It comes after Twitter user, Carl Waring tweeted: “I’m sure @MOTSI_MABUSE will come to regret saying ‘the decision was made for me…’ when she realises that some people will probably take that literally.

“I haven’t checked but I’m sure the comments have already started #Strictly2021.”

Motsi retweeted the message in view of her 60,000 followers.

She penned: “100!! What was so obvious to me because the mistakes were so clear!

“In times of some crazy conspiracy theories… lol.”(sic)

Gilly tweeted: “Sadly from the first step almost, your decision was made for you. I knew exactly what you meant.”

Shane wrote: “I personally think both made so many mistakes in the Dance Off that I’d have had to go with my heart and that would be to save Judi and Graziano. But I’m sure most people knew what you meant when you said that. Much love.”

At the time, viewers theorised the meaning behind what Motsi meant and immediately took to Twitter to express their opinions.

@SooozeKerr wrote: “What did Motsi mean? ‘The decision was made for me’ #Striclty.”

@OfficialCWH commented: “Did Motsi say ‘the decision has been made for me’? Little bit fishy if you ask me #Strictly #StrictlyComeDancing.”

The pair received mixed comments from the judges and a total score of 25 out of a possible 40, leaving them second to last on the leaderboard.

Sadly, Judi exited the competition after they decided to save Adam and his pro partner Katya.

Strictly Come Dancing continues Saturday on BBC One at 6.45pm.