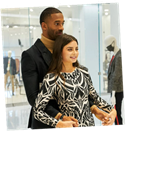 Usually, when we discuss Bachelor spoilers, it’s a lighthearted conversation about who might wind up with a Neil Lane diamond on their finger at the end of the season.

But Matt James’ time as the Bachelor has been anything but lighthearted.

In addition to the unusually high tension among the contestants, the franchise currently finds itself in the midst of a scandal that could bring its very future into question.

As you’ve likely heard by now, longtime host Chris Harrison has stepped away from the show that made him famous amid criticism of his mishandling of a growing race scandal.

It all started when an Instagram user accused frontrunner Rachael Kirkconnell of racist behavior.

The whistle-blower claimed that Kirkconnell had bullied her for dating black men while the two of them were in high school.

The controversy resurfaced a few weeks later when photos of Kirkconnell attending a plantation-themed party in 2018 began to make the rounds on social media.

The Georgia native remained silent much longer than many viewers thought was appropriate, and when Kirkconnell did apologize, her comments were widely criticized for sounding forced and insincere.

At this point, we’ll be delving into spoilers pertaining to the final episodes of Matt’s season.

So in case the headline didn’t make it entirely clear what sort of article you were clicking on, consider this your official SPOILER ALERT!

Okay, so as you may have heard by now, spoiler master Reality Steve has reported that Rachael wins Matt’s season and receives his final rose in the finale.

It’s unclear if Matt proposes to her or not, but IT does look as though these two are still together.

And obviously, that puts the show’s producers in a very difficult position.

The franchise relies upon happy, functional couples who met on the show to justify its continued existence.

After all, if none of the Bachelor Nation couples actually stick together, what’s the point of it all?

The show has never had a great track record in terms of creating successful marriages, and the last few seasons have resulted in quite a few strikeouts.

Sure, Tayshia Adams and Zac Clark seem to be built to last, but Clare Crawley and Zack Moss have already broken up, and Peter Weber and Hannah Brown are as single as the day they auditioned.

Now, the show is primed for the most awkward and anti-climactic After the Final Rose special of all time.

For starters, it will almost certainly be hosted by someone other than Harrison.

And the guests of honor will likely be Matt and a woman whose racially insensitive behavior has made her the most controversial Bachelor contestant in the show’s history.

This might be the rare case in which producers are actually rooting for the couple to break up before the finale so that they can side-step what’s sure to be an intensely awkward two hours of live television.

The Bachelor Spoilers: We Know the Winner … and a Proposal Shocker!Start Gallery

Of course, at the end of the day, only Matt can kick Rachael to the curb.

Producers can choose to ban her from the live episode and have Matt on by himself, but that’s unlikely to eliminate the controversy that they’re hoping to avoid.

Whatever the case, it’s rather ironic that it should happen in Chris Harrison’s absence, but this really is shaping up to be the most dramatic season EVER.

17/02/2021 Celebrities Comments Off on The Bachelor Spoilers: How Will the Rachael Kirkconnell Race Scandal Affect the Season Finale?
Lifestyle