Products featured are independently selected by our editorial team and we may earn a commission from purchases made from our links; the retailer may also receive certain auditable data for accounting purposes.

Recording, mixing, and distributing music used to require going into a recording studio, cutting a demo, and sending it to local radio stations or record labels. The process has been simplified significantly, and you can get results that sound as good (or even better) by turning a part of your room into a recording area.

We’ve done our research and found seven pieces of recording equipment that costs less than $200. All of this tech will work with both Mac and PC computers, and won’t require any proprietary apps or software. We’ve also chosen gear that can all work well together, so you can refer back to our guide over time as your studio starts coming together.

If you’ve been curious about what you need to record music at home, and want to stick to a reasonable budget, you can find all of the essential gear below.

An audio interface acts as the link between your instruments (including microphones), and your computer, so it’s the one piece of gear you absolutely need to record digital music. The Audiobox iTwo by PreSonus is a two input interface, which means you can use it to record two instruments at the same time. You can adjust the gain (volume) of each one individually by turning the two small knobs labeled “1”  and “2” to avoid distortion.

The Audiobox iTwo can record 24-bit music at a sampling rate of up to 96kHz, which means you can maker higher than CD-quality music. Keep in mind recording high resolution audio files will require a more powerful computer, and the files will take up a lot more space.

One of the main reasons we’re recommending this interface is because it’s bus powered, which means it’ll draw electricity from your computer’s USB port. That makes it a lot more portable, since you won’t have to find an outlet to plug it in.

PreSonus bundles the Audiobox iTwo with its Studio One recording software, which includes over six gigabytes of audio samples. An audio interface is the foundation of any recording environment, and PreSonus’ AudioBox iTwo is a great one to start with. 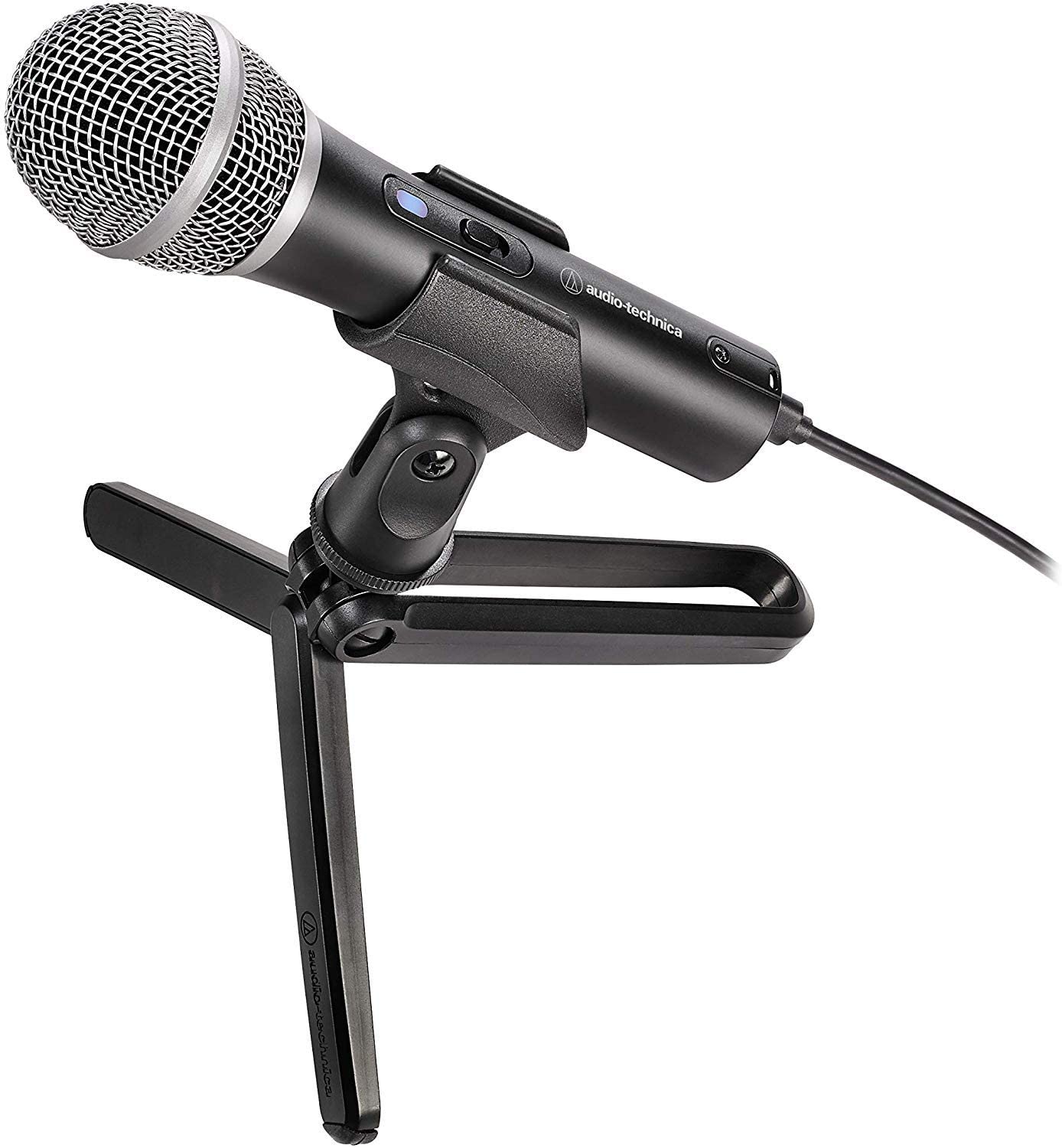 Audio-Techinca’s ATR2100x-USB is one of the few microphones designed for easy digital recording and live concerts.

The mic has a USB port, which allows you to connect it directly to a computer without an interface for quick recordings, and XLR, so you can plug it into a mixer at a gig. This flexibility makes the ATR2100x a great all-around choice for musicians.

This microphone can record 24-bit audio at a sampling rate of 192kHz, which is way higher than CD quality. It also has a headphone jack, so you can listen to yourself record directly from the mic itself. If you’d like to record music and play some shows, Audio-Technica’s ATR21000x-USB is a great mic choice. 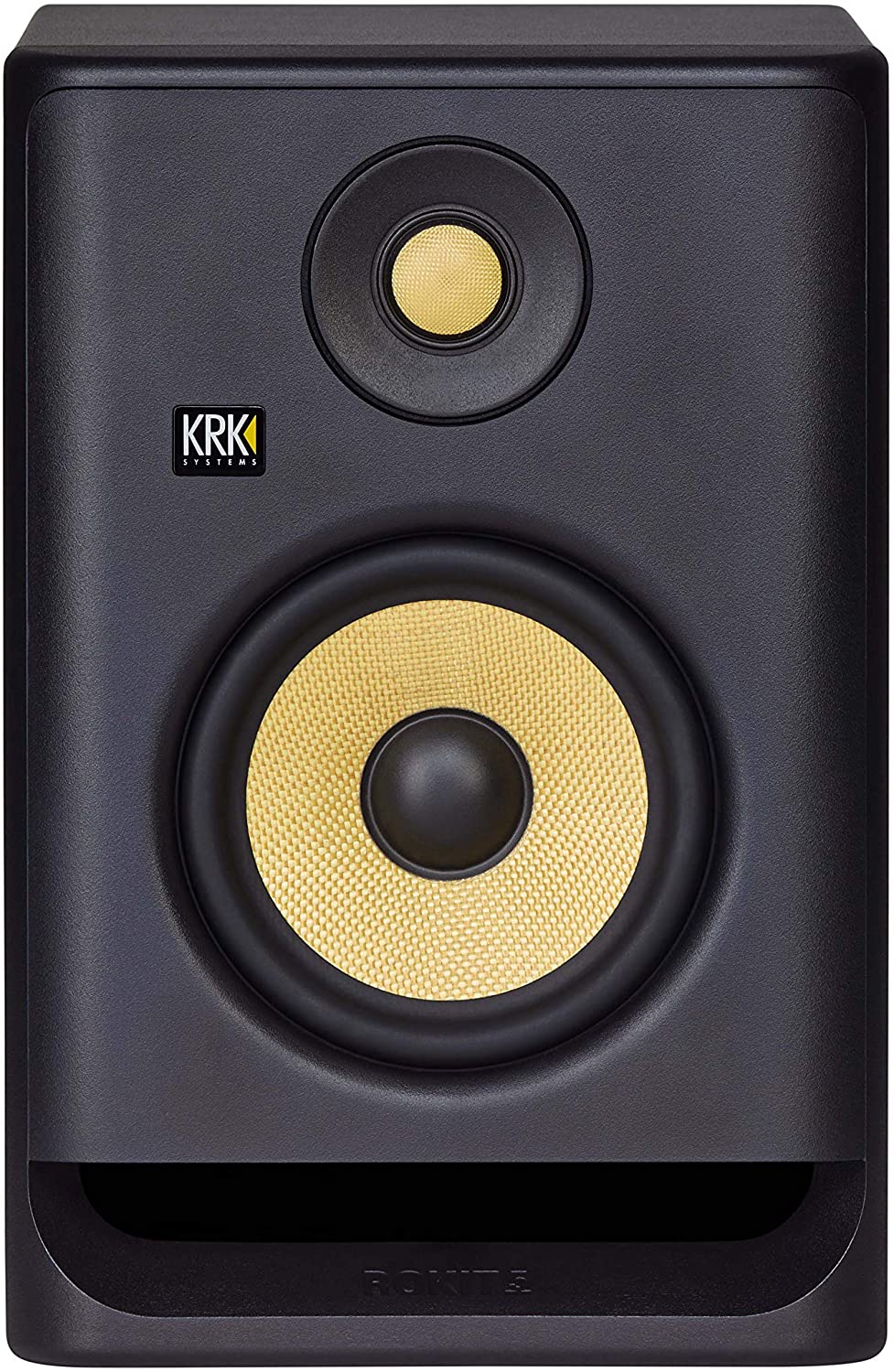 Studio monitors are different than standard bookshelf speakers because they’re specifically designed to handle exposure to very low or very high frequencies without any distortion. The idea is that you as the musician can get music to sound the way you want it to sound before releasing it to the public.

KRK’s RP5 Rokit G4s are equipped with two drivers: a 5.25-inch woofer that handles mid-range and bass frequencies, and a 1-inch tweeter to handle treble frequencies. The speakers even have a mini LED screen on the back that shows you how it’s adjusting its frequency response based on its location in your room. You can make further tweaks and calibrations by downloading the KRK Audio Tools app on your smartphone (iOS and Android).

If you want to mix your music using a set of speakers, and want ultra fine-grain control over the way your music sounds, KRK RP5 Rokit G4 Studio Monitors get our recommendation. 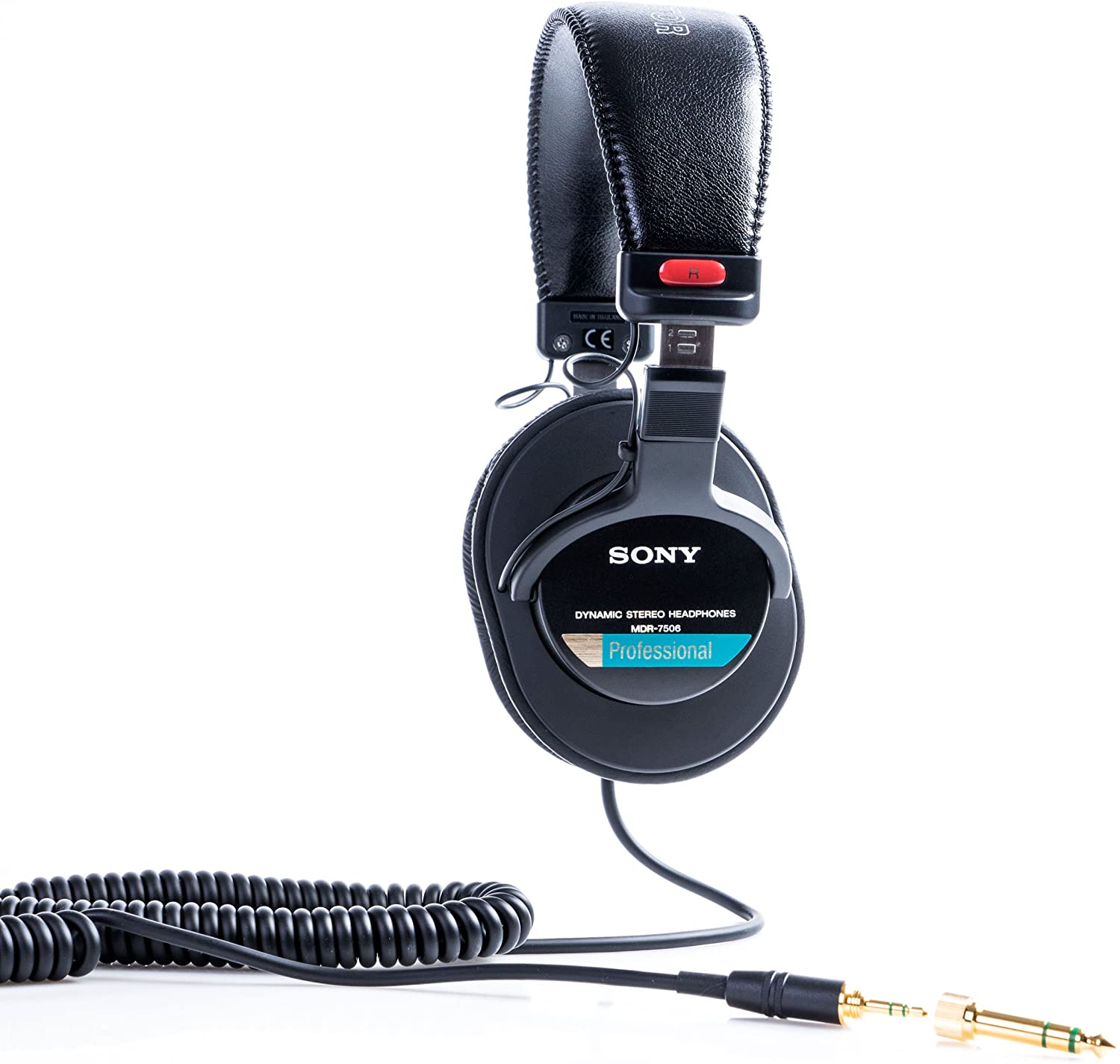 Sony’s MDR7506s are a pair of over-ear headphones that serve the same purpose as the studio monitor speakers we just recommended. The headphones have large 40mm drivers, and are tuned to sound “flat,” so you’ll hear your music accurately instead of with boosted bass or treble.

There’s no way to make tweaks to the way these headphones sound without going into the software settings of your recording app, but that’s a good thing. These headphones are designed to handle any frequency combination you throw at them without distorting, so you can get your music to sound perfect to your ears.

Sony bundles the MDR7506s with a 1/8-inch to 1/4-inch adapter, so you can plug them directly into your audio interface while recording or mixing. 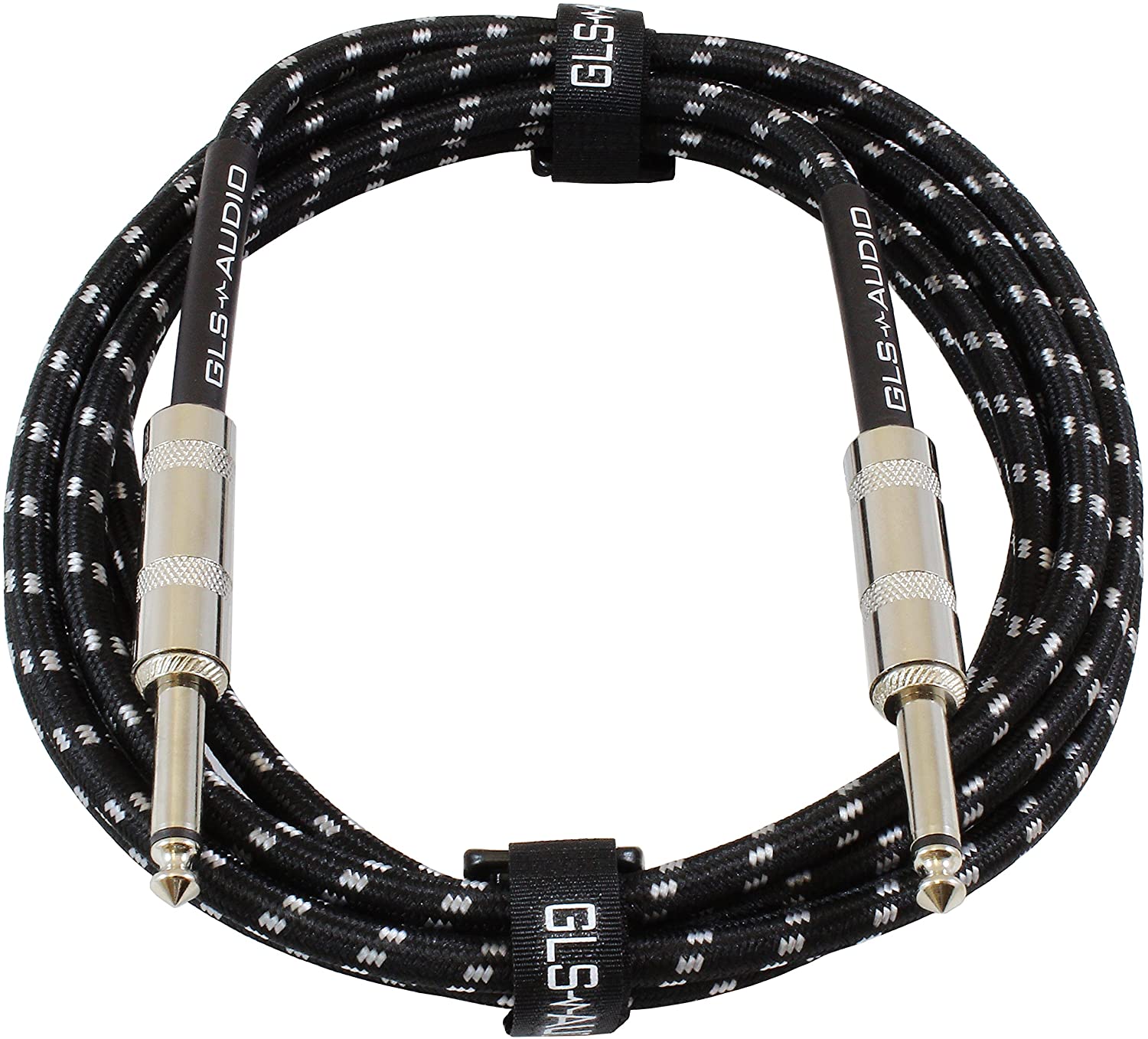 Using a damaged instrument cable increases the chances of audio anomalies like buzzing getting on your recording.

These cables from GLS Audio are covered in a tweed material that’s durable and flexible. Beneath the tweed are layers of copper and plastic to further insulate the cable in case of an accidental nick. The cables have rubber close to the areas where they terminate to disperse heat more effectively.

These are the only cables I use when recording, and have never heard any strange or unwanted distortion during playback. GLS also makes XLR cables for microphones out of the same materials, which I’ve also used regularly without any problems. There are many debates about how much of an impact cables will actually have on your recording, but it’s definitely better to use one without any cuts or marks on it. 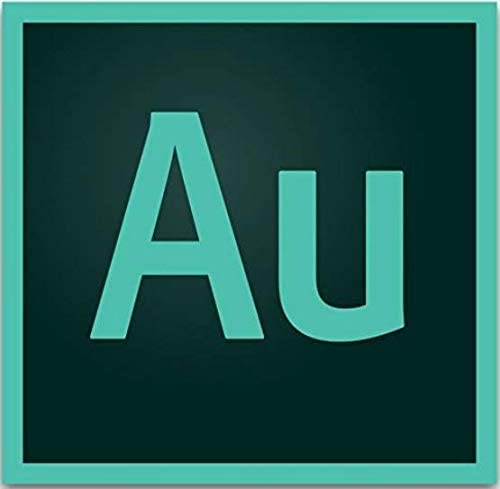 We’ve only covered hardware up to this point, but your recording software will also have a big impact on how your music turns out.

It may take some time to get your feet wet, but Adobe Audition is an extremely powerful piece of software. If you’ve tried free audio editing apps, and have been dissatisfied with their limitations, this will be a substantial upgrade.

Adobe Audition is a subscription-based app that costs $21 per month on its own, but it’s also part of Adobe’s Creative Cloud bundle, which includes software like Photoshop, Premiere, and InDesign for $53 per month.