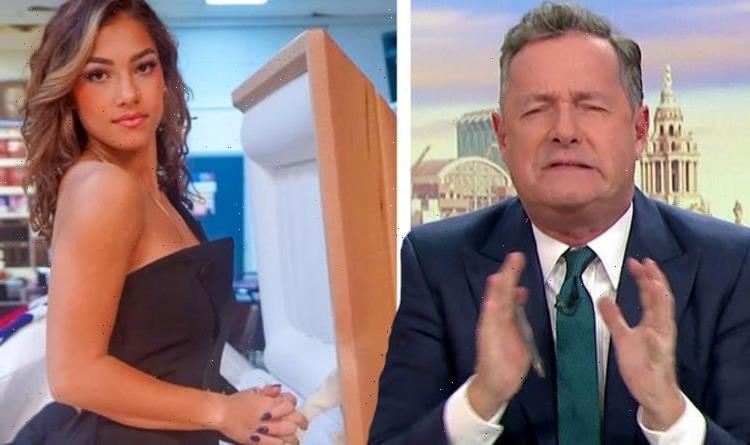 Not much leaves Piers Morgan, 56, shocked these days but nothing prepared him for what he came across on Thursday. After 20-year-old Instagram model Jayne Rivera went viral as she faced backlash for posing in front of her father’s open casket, the former Good Morning Britain star was utterly appalled and it left him questioning how far people go for the perfect Instagram shot.

Sharing a series of images to her page, one saw her hold her hands in prayer alongside the caption: “Butterfly fly away, Rip Papi you were my bestfriend. A life well lived.”

While many branded the photos “sick”, “vile” and “disgusting”, Piers certainly had something he wanted to get off his chest.

“There are myriad candidates for worst Instagram post of all time, most of them guilty of the most awful and inappropriate ‘flarnecking'(a wonderful 19th century English word meaning ‘vulgar flaunting and shameless ostentation’),” he began.

“But nothing quite prepared me for a series of eight truly shocking images posted on Instagram by Jayne Rivera, a 20-year-old fitness model and ‘influencer’ from Miami, Florida, of herself preening away in a figure-hugging plunging neckline black suit style mini-dress, stockings and boots, in front of her dead father’s open coffin.”

He pointed out to those who have yet to see them, that the photos saw her “smirking, praying, and posing as if she’s on a movie premiere catwalk showing off for the paparazzi”.

Rivera had 84,800 Instagram followers and 307,000 on Tik-Tok, but has since lost a huge chunk of her fan base following what many are dubbing her “funeral photo shoot”.

As Piers recognised her following makes her a “popular influencer”, he scoffed that her “ghoulish photos” went down like a “cup of cold vomit”, even with her most loyal fans.

He reeled off some comments that read: “‘Jayne, delete these pics, apologize for your lack of discretion or I will stop following you and I hope others will do the same,’ one commented.

“‘This is a hard unfollow. God rest that man’s soul,’ said another.

While there were those who stood by the fitness model, sending her their support for honouring her dad the way she knew him, Piers added: “There’s something so utterly and repellently distasteful about a young woman exploiting her father’s dead body for ‘likes’ as he literally lies dead behind her.”

The controversial shoot comes after Rivera took to Instagram last week to reveal her veteran father had passed away.

But the Life Stories presenter admitted that 56-year-old Jose Antonio Rivera’s heroic service to his country demanded that his death be greeted with the “utmost respect and dignity”.

“Instead, he became a trashy tool for a daughter whose addiction to social media and seeking attention and praise from strangers over-rode any sense of basic common decency,” Piers retorted.

And if the pictures weren’t enough, he was even more furious with her response to the backlash.

Speaking to NBC on Wednesday, she said that she “understood the negative reception”, but added that the photos were taken “with the best intentions in a manner my father would have approved with had he still been alive”.

“Everyone handles the loss of a loved one in their own ways; some are more traditional while others might come across as taboo,” she said.

“For me, I treated the celebration as if my father was right next to me, posing for the camera as he had done on many occasions prior.”

She went on to say: “I have worked extremely hard for eight long years building my audience.

“People from the outside judge a book by its cover without stopping to understand the intentions or underlying meanings of the book.

“There is nothing wrong with what I posted, and I stand by that.”

Rivera’s Instagram account has since been suspended for reasons that left her “baffled” as she explained “no community guidelines There were were broken when the pictures were published”.

Piers ended his rant by wondering whether she and Instagram cashed in on the backlash her photoshoot received.

“Jayne Rivera would consider herself a content ‘creator’ and earns money from many of her posts from brands that she promotes,” he said.

“Did she cash in from designers of the clothes she was prancing about in for these hideous photos? It wouldn’t surprise me. That’s literally her business.

“Yes. They got huge traffic once people became aware of them. And traffic is Instagram’s currency for advertisers.”

He then added: “As with everything posted and then deleted online, Rivera’s photos are now cemented in cyberspace infamy anyway, reserving her a special place in hellish hashtag history.”

29/10/2021 Celebrities Comments Off on The f*ck was she thinking? Piers Morgan slams Instagram model over horrific photoshoot
Lifestyle