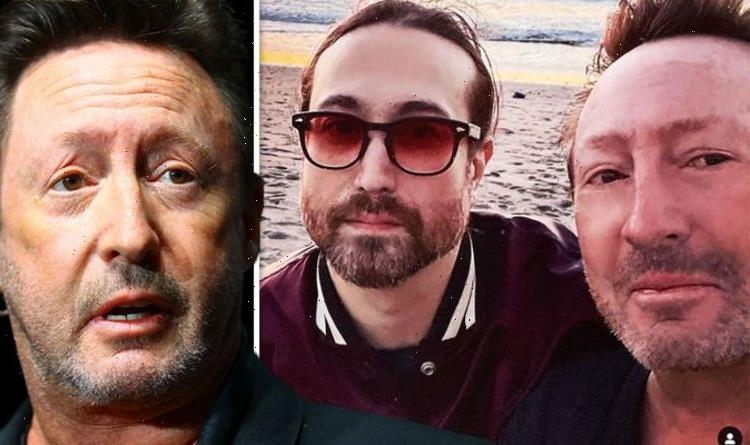 John Lennon’s first son Julian Lennon has taken to social media to reveal that he is on a road trip with his half-brother, Sean Taro Ono Lennon. The Beatles star’s first child had a strained relationship with his musician father following his split from his mother Cynthia Lennon in 1968. But it seems that Julian, 58, is now closer to Sean, 46, than ever before, having embarked on a “magical” road trip together across America’s West Coast.

And the film has made me love my father again

In view of his 289,000 Instagram followers, the star documented his holiday with Sean around California.

Julian wrote: “A lil wind blown & tired after a few hours driving through the Mountains to the Sea, but so worth it…” (sic)

“A Magical Day…” he ended the caption.

The singer featured a series of snaps, including one of himself and Sean on the beach in front of an incredible sunset.

John and his first wife Cynthia had son Julian together, who was believed to be the inspiration for three Beatles songs: Lucy in the Sky with Diamonds (1967), Hey Jude (1968), and Good Night (1968).

However, following their split in 1968, the singer’s relationship with his son became strained and Julian had almost no contact with his father until the early 1970s.

John went on to have his second child, son Sean, with Yoko Ono and upon his death left a great deal of his money to them.

Addressing Julian and Sean’s relationship, a source said: “They have been friends for about 20 years, but are growing closer as time passes.

“People talk about them as if they were enemies, and there was a lot of pain, and a lot of that was very public, but not any more.”

“Julian and Sean have always had a bond outside of all of that. They love each other,” they told The MailOnline.

Shortly before he died, John opened up about the difference between Julian and Cynthia, and his second marriage to Yoko and their young son Sean.

In an interview with Playboy, he said: “Sean is a planned child, and therein lies the difference.

“I don’t love Julian any less as a child. He’s still my son, whether he came from a bottle of whiskey or because they didn’t have pills in those days.

“He’s here, he belongs to me and he always will,” he added.

In an interview with the Telegraph in May 1998, Julian spoke about the pain he felt of being excluded from his father’s will, while Sean is reported to be the main inheritor of the fortune.

In the article, it was claimed that Julian was to receive £2,400 a year in maintenance from the divorce settlement between John and Cynthia.

There was reportedly also a £50,000 trust fund which was inherited by Julian when he was 25-years-old.

John’s net worth was reported to be in the region of around £220 million.

Three days ago, Julian took to social media after viewing the new Disney+ documentary, The Beatles: Get Back.

In a candid post, he told how the three-part special “made him love his father again”, as well as posting a black and white snap of him and Sean.

He penned: “What an Amazing night, firstly seeing ‘Get Back’ & then Stella’s Event afterwards…

“The One True thing I can say about it all, is that it has made me so proud, inspired & feel more love for My/Our family, than ever before…”

Julian went on: “And the film has made me love my father again, in a way I can’t fully describe….

“Thank you to All who had a hand in bringing this project to fruition… Life Changing,” he ended.