The BTS ARMY loves all of BTS’ Bangtan Bomb videos, but one series stands out above the rest: BTS’ birthday vlogs. The videos document the making of the group’s birthday parties, which usually involve a few members decorating the cake, while the rest keep the birthday guy distracted. BTS’ V just turned 24 years old (25 in Korea) on Dec. 30, 2019, and now, two weeks later, fans can finally know what went down on that special day with this video of BTS’ surprise party for V’s 24th birthday.

As fans know, Jimin is always the one in charge of decorating the cake with candles and other embellishments. On Dec. 3, 2019, he and J-Hope teamed up to surprise Jin with a cake while he filmed a livestream, and now, the duo did the same for V’s birthday, except with Jungkook’s help, too.

The video began with Jimin and Jungkook taking the cake out of the box and marveling at all the strawberries on top. "Strawberries, they look delicious," Jimin said. Meanwhile, J-Hope urged them to hurry up, since the group would have to head out soon. (It was the day BTS had to fly to the U.S. for their New Year’s Eve performance in NYC, so they were all in a huge hurry to leave for the airport.)

To speed up the process, J-Hope lit the candles. While the trio set up the cake, RM, Suga, and Jin kept V in place. When the cake was finally ready, the guys headed toward V in the other room, and shut off the lights, all while singing the "Happy Birthday" song.

The best part was that, because the lights were off, Jimin had no idea where V was and was actually heading in the total opposite direction. Eventually, he found V, though, and the birthday boy blew out the candles and made a wish, which he revealed he made for his members instead of himself.

All in all, the birthday party turned out to be a success. "This was all my idea, Taehyung," Jin said.

V ended the video be revealing he will spend his birthday flying on a plane while dreaming. 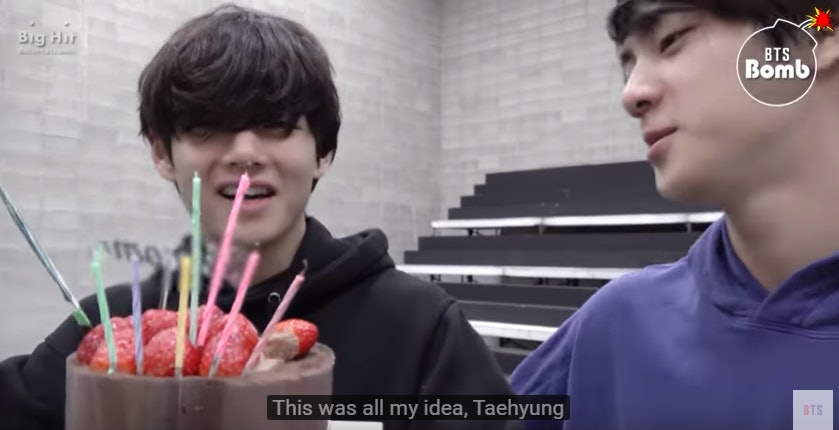 This is BTS’ second Bangtan Bomb video with English subtitles. Earlier this week, Big Hit uploaded their first subtitled video, featuring Jungkook eating a variety of ice cream, and the BTS ARMY was so surprised.

2020 will definitely have plenty more Bangtan Bomb clips, and the ARMY is so ready for them all.

Related posts:
16/01/2020 Celebrities Comments Off on This Video Of BTS’ Surprise Party For V’s 24th Birthday Will Give You FOMO
Lifestyle