‘Welcome to New London. We have three rules — no privacy, no family, no monogamy. Everyone is very happy.’

If this sounds like a promotional brochure for a Club 18-30 holiday, it’s actually the opening statement of a new TV dramatisation of Aldous Huxley’s dystopian novel Brave New World.

Its main character, Lenina Crowne, is about to get a ticking-off from a government official for being in an ‘exclusive sexual relationship’ for more than two months.

Marx remonstrates with her for the sheer selfishness of not sharing herself and her lover with the wider adult population. ‘Everyone belongs to everyone else,’ she agrees, reciting one of the mantras of her society, but it’s clear that she has her doubts about that. 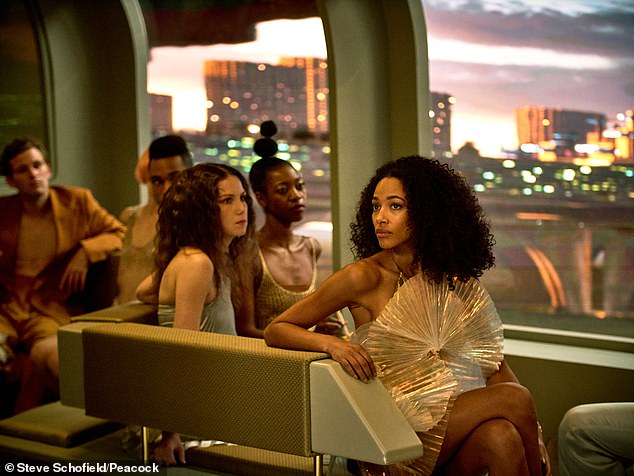 ‘Welcome to New London. We have three rules — no privacy, no family, no monogamy.’ If this sounds like a promotional brochure for a Club 18-30 holiday, it’s actually the opening statement of a new TV dramatisation of Aldous Huxley’s dystopian novel Brave New World

Sex is always on the minds of the perfectly groomed beautiful people who waft around futuristic New London — a seemingly benign, trouble-free and utterly antiseptic society — even if it’s rather more explicit than it was in Huxley’s story. One thing he couldn’t have predicted was the salacious imperatives of today’s TV commissioners.

Many people love to hail the bleak, mind-controlling tyranny created with 1984 by George Orwell (who, by coincidence, was briefly taught by Huxley at Eton) as uncannily prescient. But in many ways it was Huxley who has proved much nearer the mark — and he wrote his book nearly 20 years earlier.

In so many ways, the world Huxley envisaged — one of freely available designer drugs, casual sex, Viagra-like chewing gum, chemical birth control, genetic engineering, cloning and a sybaritic society fixated on instant gratification and limitless consumption — is with us already. 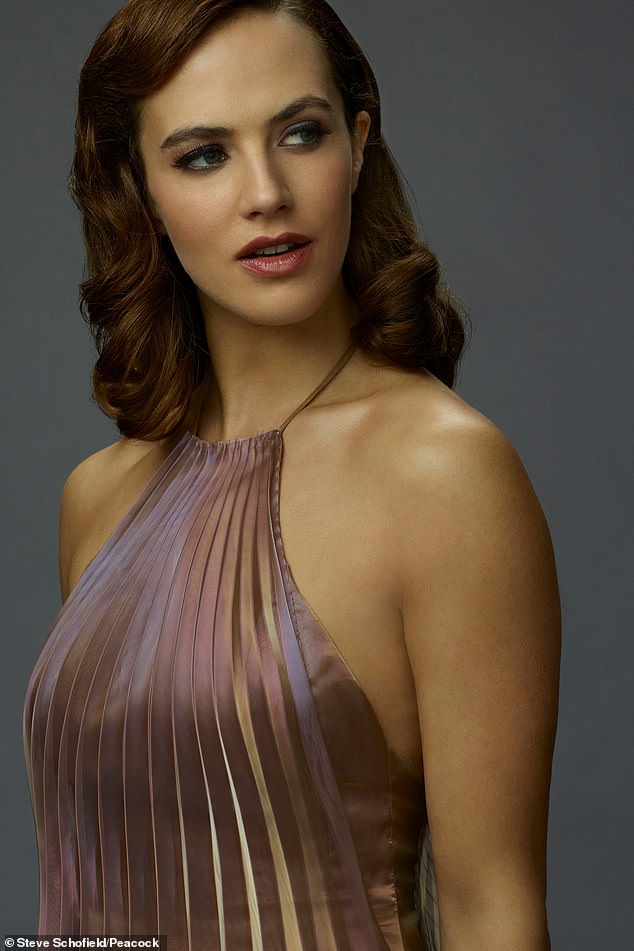 In the opening scenes, its main character, Lenina Crowne (played by Jessica Brown-Findlay), is about to get a ticking-off from a government official for being in an ‘exclusive sexual relationship’ for more than two months

The title is taken from Shakespeare’s The Tempest and was deeply ironic given that it is used to describe a band of shipwrecked ne’er-do-wells who have just washed up on a beach.

Huxley was being ironic too, given that the England he created was a utopia that was really a thinly-concealed dystopia. As Jessica Brown Findlay puts it: ‘It seems perfect. But the minute you scratch the surface, you start to discover stuff.’ She added: ‘But, yeah, a couple of days there? That would be great.’

His imagined world isn’t oppressive in the same way as Orwell’s but Huxley, later famous as an early experimenter with the hallucinogenic drug LSD, shocked his generation and, indeed, generations of later readers — often reading it at school — with the book’s vision of a world utterly corrupted by science, capitalism and self-indulgence.

Even the clothing in Brave New World was scandalous — the women wear zippers on everything, such as Lenina’s so-called ‘zippicamiknicks’ underwear, but in Huxley’s day zippers were condemned by vicars because they made clothes so easy to take off. 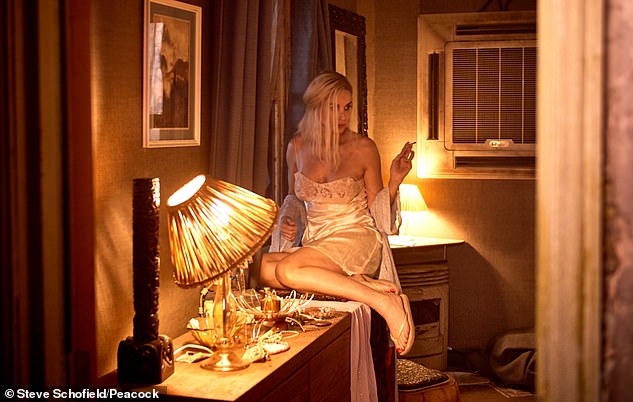 Also in the cast is Hollywood star Demi Moore as John the Savage’s mother Linda, who Huxley portrayed as a drug and drink-addled mess and still has her personal problems, but proves resourceful in a crisis

Set in England in AF632 (632 years ‘After [Henry] Ford’, the car pioneer and inventor of the mass production line who is venerated in a society in which even babies are produced on an assembly line), the book’s characters live on a high-tech globe divided into peaceful ‘World States’.

Harmony is achieved by keeping people high on a mood-enhancement drug called soma and by a ruthless policy of artificially-controlled birth and cloning. Graded from Epsilon Minus (virtual automatons indoctrinated to enjoy their menial work) up to Alpha Plus (brainboxes and the unchallenged ruling class), people have been genetically engineered for their role in society — the lower castes stunted as foetuses with alcohol.

Disease and ageing have been banished, and everyone lives in a world of hedonistic but bland conformity. As women no longer give birth (Lenina is one of many sterilised women, or freemartins), sex is simply recreation. Everyone is worry-free, so long as they keep popping pills.

As the public address system of London continually reassures citizens: ‘Everybody in their place — everybody happy now.’ Bright but pompous Bernard Marx, an Alpha Plus, takes Lenina (a pouting Beta Plus) on a holiday to the ‘Savage Reservation’ in New Mexico to see naturally-born indigenous people and all their disgusting primitive ways such as pregnancy, illness and romantic love.

They meet Linda who, like them, originally came from the World State but was stranded there and brought up a naturally-born son, John, alias ‘The Savage’, whose only education has been the complete works of Shakespeare.

Mother and son return with them to London where The Savage is appalled by the emptiness of this supposed ‘brave new world’, which in its own subtle way is just as totalitarian and degrading as Orwell’s Big Brother. 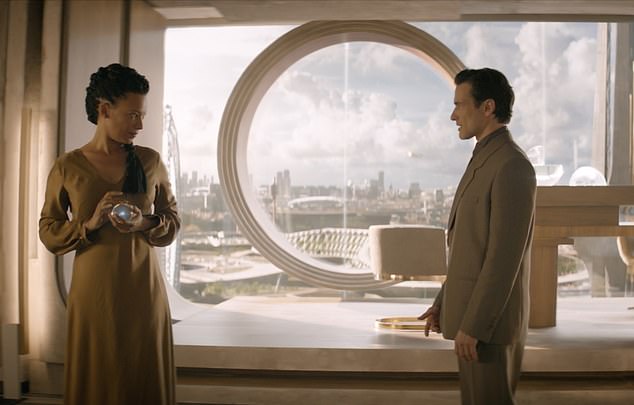 Set in England in AF632 (632 years ‘After [Henry] Ford’, the car pioneer and inventor of the mass production line who is venerated in a society in which even babies are produced on an assembly line), the book’s characters live on a high-tech globe divided into peaceful ‘World States’

The amorality of Brave New World has shocked generations of readers, as Huxley intended. He based his future society heavily on the U.S., which he had visited shortly before writing the book. He disliked its relentless cheerfulness, mass consumerism and sexual openness. (Ironically, the latest adaptation is produced by Hollywood.)

Huxley’s 1932 novel is by the day becoming less of a horrifying vision than an unflattering mirror to our own society.

Even genetically-engineered extra-intelligent ‘superhumans’ — such as his Alpha Pluses — are no longer science fiction, as those who have followed developments in stem cell technology will know.

Thankfully, however, nobody has quite yet gone so far as to practise the vicious social conditioning in the new TV series in which children who try to play with others of a much different caste are jabbed by the teacher with an electric shock rod.

The new TV series was written by Scottish comic book writer Grant Morrison and American David Wiener. It’s an adaptation of its time — high on titillation, glamour, tension and violence and low on deep philosophising. The plot at times veers wildly from the book and goes into conventional thriller territory.

David Wiener says the book was ‘hugely problematic’ in terms of its racism and misogyny. Indeed, Huxley — who as an Old Etonian was used to the rigid hierarchy of public schools — made the domineering alphas always men, the betas women and invidiously appeared to confine black people to the lower castes.

As is now the norm in adaptations of classic works, the makers of the TV series have liberally changed the races, genders and personalities of characters. Consequently, Brown Findlay’s Lenina is not the vacuous bimbo she is in the book, although she still works in the ‘hatchery’ fertilising test-tube babies.

She’s more perceptive than her arrogant and blinkered friend Bernard, the slightly-built and hesitant member of the elite who fails dismally to impress his fellow citizens as an Alpha Plus. (‘Everyone says his embryo was mishandled,’ says Lenina’s best friend bitchily).

Still, both Lenina and Bernard are united in a growing realisation that their little paradise has its weak points. ‘It’s not real . . . any of it,’ he tells her.

John the Savage — played by American Alden Ehrenreich, who was Han Solo in Solo: A Star Wars Story — is hunkier and less puritanical than the book version. He no longer speaks largely in lines from Shakespeare but is still intent on disrupting New London’s cosy little utopia.

His mother Linda, who Huxley portrayed as a drug and drink-addled mess, still has her personal problems but, as played by Hollywood star Demi Moore, she proves resourceful in a crisis.

The technology has had to be updated, too, given how much of what seemed revolutionary to Huxley — test-tube babies, video-conferencing, helicopters — is old hat now.

The creators of the new TV series have introduced details that are also futuristic to us, including self-flying planes and virtual reality contact lenses that plug straight into the internet, which is directed by an all-powerful computer network, Indra.

Citizens are expected to stay ‘on the network’ at all times. The lenses, which instantly reveal to the wearer the caste of everyone they see, bear an uncanny resemblance to the controversial Google Glass computer spectacles and facial recognition systems that have been vexing privacy campaigners.

‘Huxley was very afraid of a world in which people would become so sexually stimulated, so pharmacologically numb and so distracted by entertainment and media, that they would fail to look within and beyond themselves in uncomfortable ways,’ says Wiener.

Much of the plot revolves around a new love triangle between Lenina and her two male suitors, Bernard Marx and John. The latter rescues Bernard and Lenina after they get caught up in a violent uprising in the Savage Reservation (one of many plot lines which isn’t in the book).

This part was filmed not in the deserts of New Mexico, where it is set, but not-so-savage Dungeness, Kent, although the ‘savages’ are reassuringly all-American in stark contrast to the well-spoken Brits who come to laugh at them. Most of the series’ interior scenes were filmed at a vast studio outside Cardiff.

Meanwhile, back in New London, it appears that everything is not quite so perfect as it appears. An Epsilon cleaner plunges to his death off a balcony. Marx investigates and suspects it was suicide.

Aldous Huxley, who died in 1963, would no doubt feel deeply dismayed but also vindicated by much about today’s world — and that might include what television has done to his greatest creation.

Brave New World is on Sky One tonight at 9pm. All episodes available on Sky On Demand and NOW TV.