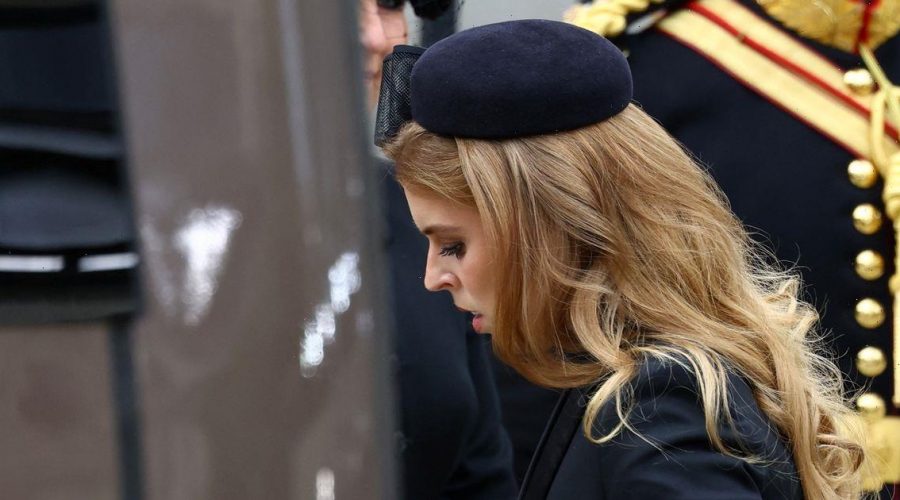 Beatrice, 34, and Edoardo, 38, were accompanied by Beatrice's mother, Sarah Ferguson, 62, who's arm the eldest daughter of the Duke and Duchess of York could be seen clutching.

As they walked from the service, Eduardo, who shares one year old daughter Sienna, with Princess Beatrice, put a comforting arm around his wife of two years as she appeared to break down in tears.

No doubt they were heading back to Royal Lodge, the home that Beatrice and Eugenie's father Prince Andrew shares with their mother and his ex-wife Sarah, that is located on the Windsor estate.

Beatrice, Sarah and Edo had been joined at the service by Beatrice's younger sister, Princess Eugenie, 32, her husband Jack Brooksbank and Prince Andrew.

They and other royals attended the Queen's state funeral at Westminster Abbey yesterday, before attending the service of committal at St. George's Chapel, where the Queen was buried later on last night.

Princesses Beatrice and Eugenie were known to be extremely close to their grandmother, the Queen, and they've been pictured looking devastated in the weeks since her death.

They paid a moving tribute to their "dearest Grannie" in a joint statement over the weekend, as they thanked her for "including them".

The sisters shared a picture of themselves as youngsters with their grandmother and wrote: "Our dearest Grannie, We've not been able to put much into words since you left us all.

"There have been tears and laughter, silences and chatter, hugs and loneliness, and a collective loss for you, our beloved Queen and our beloved Grannie.

"We, like many, thought you'd be here forever. And we all miss you terribly. You were our matriarch, our guide, our loving hand on our backs leading us through this world. You taught us so much and we will cherish those lessons and memories forever."

The pair continued: "For now dear Grannie, all we want to say is thank you. Thank you for making us laugh, for including us, for picking heather and raspberries, for marching soldiers, for our teas, for comfort, for joy. You, being you, will never know the impact you have had on our family and so many people around the world.

"The world mourns you and the tributes would really make you smile. They are all too true of the remarkable leader you are.

"We're so happy you're back with Grandpa. Goodbye dear Grannie, it has been the honour of our lives to have been your granddaughters and we're so very proud of you.

"We know that dear Uncle Charles, the King, will continue to lead in your example as he too has dedicated his life to service."

They ended the message by saying: "God save the King. With our love, Beatrice and Eugenie."