Surprising many, the Saved by the Bell reboot defied expectations when it premiered on Peacock over Thanksgiving. “That seems to be everyone’s feeling,” executive producer Tracey Wigfield tells ET with a laugh, adding when people first heard about it, they wanted to write it off. Instead, she was “so heartened when people gave it a chance and responded to it in such a big way.”

After its original run from 1989 to 1994, Wigfield brought the high school comedy out of its bubble and infused it with a modern sensibility that comes from her years of writing on 30 Rock, The Mindy Project and creating the short-lived series Great News. “The original had a very different tone. It was a multi-cam written for a younger set ’cause it was on Saturday mornings,” she says.

Still taking place at Bayside High, the new series follows a group of privileged teens who must now share the hallways with a more diverse group of kids from working-class families after the California governor (Mark-Paul Gosselaar returning as a grown-up Zack Morris) shuts down lower-income schools. 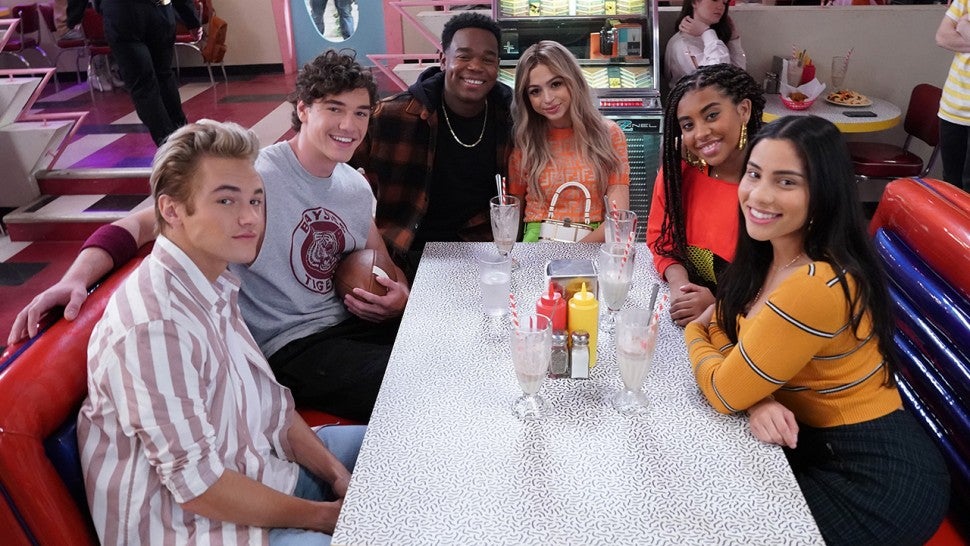 In addition to brief appearances by Zack, the series welcomes back originals Jessie Spano (Elizabeth Berkley Lauren) and A.C. Slater (Mario Lopez), who serve as faculty members and the voice of reason to a new generation of students. Played by Haskiri Velazquez (as Daisy Jiménez), Mitchell Hoog (as Zack’s son, Mac), Josie Totah (as Lexi Haddad-DeFabrizio), Alycia Pascual-Peña (as Aisha Garcia), Belmont Cameli (as Jessie’s son, Jamie Spano) and Dexter Darden (as Devante Young), the young stars inject a much needed dose of reality to the franchise.

Selena Gomez jokes aside, which Peacock immediately apologized for and removed from the show, Wigfield was able to strike a smart blend of meta, fast-paced humor infused with pop culture references while incorporating elements that made the original so charming. One such example is episode three, “The Bayside Triangle,” which “hit the nail on the head in terms of tone and the kind of tightrope we were trying to walk,” Wigfield says.

In it, Mac and Jamie have both fallen for the same girl but don’t realize it, “which is just an absurd take on a story from the original show,” Wigfield says. Meanwhile, in what she calls a more grounded take that “you would see on a different kind of high school show,” Devante is suspected of stealing a bunch of iPads from school. “The weirdness of the high stakes of the one story and the incredibly low stakes of the other are kind of funny together,” she explains. 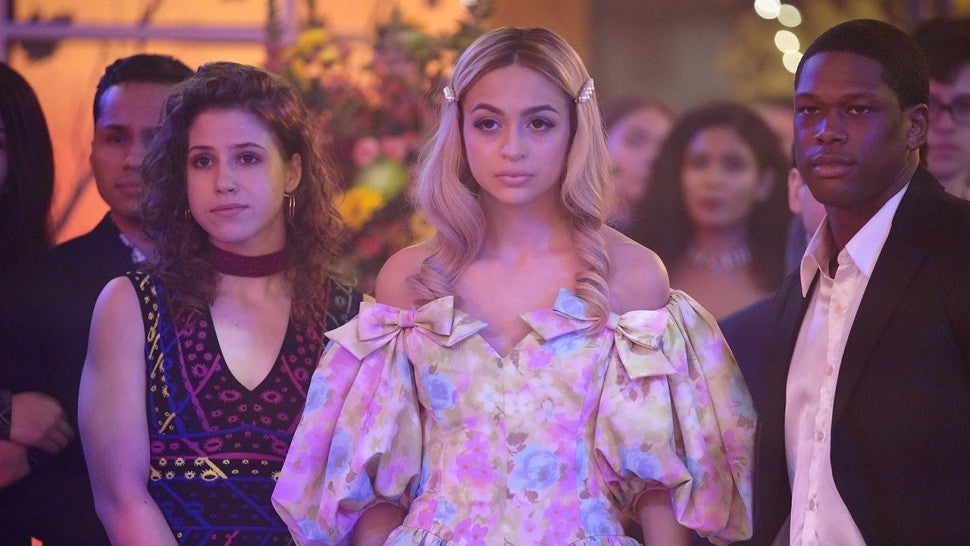 Another reason why the show shines is thanks to the ensemble of young stars who expertly walk that tightrope. Easily one of the breakouts is Totah, a rising star first seen on Champions who came out as transgender in 2018. Wigfield worked closely with her to craft Lexi, even bringing her on board as a producer of the series.

While Lexi, who is also openly transgender, follows in the footsteps of Regina George, the show updates the mean girl trope by not making her so much of a bully among the other students as she is just revered by them. “There’s a generational difference,” Wigfield says. “It’s not cool to be mean and not woke or thoughtless about where other people are coming from.”

And although Regina is the classic model for someone like Lexi, it’s hard not to see the through line between her and Portia Scott-Griffith played by Nicole Richie on Great News, who was another witty mean girl without being a bully. “I love writing that kind of person. It’s so funny to me,” Wigfield says, agreeing that perhaps Richie should play Lexi’s mother in future seasons. “Maybe she’ll do it.” 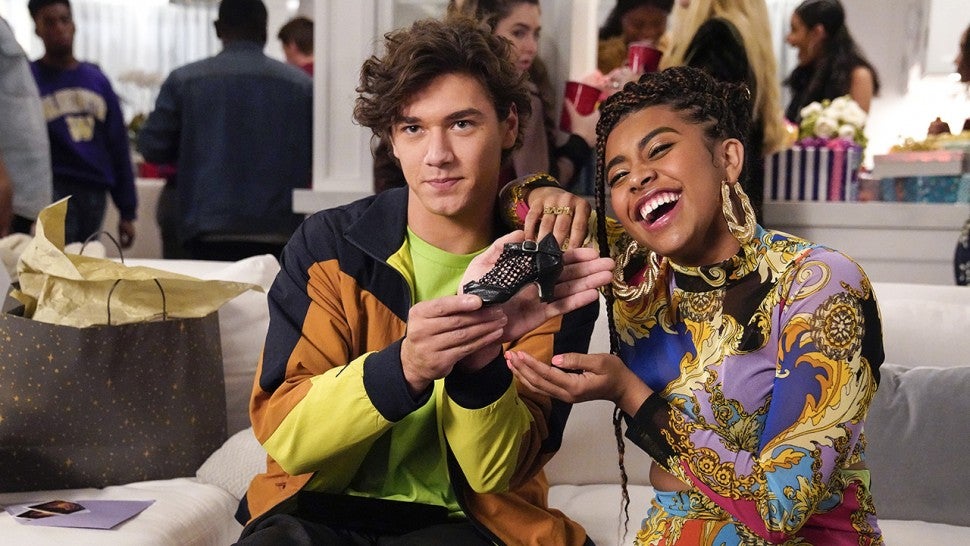 Also softening Lexi’s mean girl tendencies is the unexpected love triangle she found herself in with Jamie and Aisha by the end of season 1. “I’m sure it will give us a story going forward in season 2, but I think the success of the love triangle is that you like all three of them,” Wigfield says. While Aisha and Jamie are cute together and that Lexi has been harboring a crush on him for such a long time, there’s no obvious choice like in the case of other teen series. “It’s not like, ‘Oh, be with Felicity, Ben,’” she quips.

How the story plays out between the three remains to be seen, but if the show gets picked up for a second season, Wigfield is already thinking about ways to flesh people out and excited to see different combinations of characters onscreen. “There’s so much stuff you felt like you couldn’t really go into,” she says. “We never got to do a Daisy dating story or romantic story.” They also never really left Bayside even though “that was always something we talked about,” she adds.

As for the one-liner about COVD-19 in the finale, “it felt wrong not to acknowledge it even in a small way just because our show talks so much about education inequities,” Wigfield says, adding she’s unsure if the pandemic is something that will infiltrate the Saved by the Bell universe. “I’m not super interested right now in seeing it, but that might change.”

Perhaps the biggest question about season 2 is how much more of the older cast audiences will get to see. While the new generation of actors are meant to be the stars of the series, the original cast, including Tiffani Thiessen as Kelly Morris and Lark Voorhies as Lisa Turtle, are very much a part of the fabric of the show. “As a viewer, if I was coming to this and I didn’t see any original cast, I would be disappointed,” Wigfield says, explaining that while it’s about what’s going on at Bayside in 2020, they still have to tether it to the original.

But as for how much story was dedicated to them really came down to availability. Berkley Lauren and Lopez could do all the episodes while Gosselaar and Thiessen were series regulars on other shows during the shooting of season 1. “It kind of worked out because you do really need to spend a lot of time with new kids and invest in them so that it can run for multiple seasons. Otherwise if the whole thing is just old characters and ‘remember when Tori did whatever?’ — it wears thin after a while,” Wigfield says, adding that the balance of older versus new characters will likely remain the same going forward.

While the future of Saved by the Bell is still to be determined, Wigfield feels like the reboot satisfied her desire to make a show that has something to say and needs to be said right now. “For me, that’s kind of where the idea for the show came from. If you want to make a show about high school in 2020, one thing to be said about it, especially in Los Angeles, it’s not equal for everyone,” Wigfield concludes.