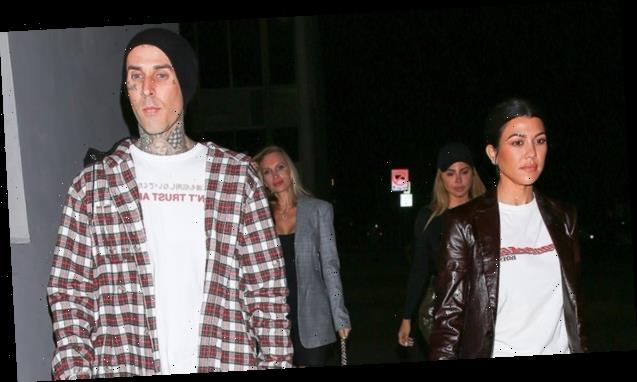 Travis Barker and Kourtney Kardashian just got very flirty in the comments section of an Instagram post.

Travis Barker, 45, and Kourtney Kardashian, 41, got fans excited when they flirted on-line on March 15. The Blink 182 rocker shared a sexy new pic and declared “I wanna be your dog,” in the caption. Kourtney replied with a black heart emoji, making it clear she was all about the hot pic — and the naughty caption.

Travis didn’t waste anytime responding to Kourtney’s love with an emoji of his own. Travis dropped the pink tongue emoji, below Keeping Up With The Kardashians star’s black heart emoji.

Fans didn’t miss the flirty exchange and left comments — and emojis — of their own.  One fan commented “Marry her already.”  Others simply left crying emoji and multiple red hearts.

Since Travis and Kourtney’s confirmed their relationship last month they have gotten increasingly flirty online.  Last week Travis even gave Kourtney a special shout out for International Women’s Day.

Although the romance is fairly new, Travis and Kourtney have been friends for years. And, as HollywoodLife EXCLUSIVELY reported last month, Travis was the first to “finally make a move” and turn his friendship with Kourtney into something romantic.

“She’s had a thing for him, too, but wanted to respect everyone’s boundaries,” our source explained at the time. “Kourtney and Travis hung out as friends for years, so it’s nothing new for the kids. They’re all fine with it.” Kourtney has three kids — Mason, 10, Penelope, 8, and Reign, 5, — who she shares with her ex, Scott Disick, 37.

Travis is also a devoted dad. He has two kids, Landon Barker, 17, and Alabama Barker, 15, who he shares with his ex Shanna Moakler, 45.

It seems Kourtney and Travis bonded over their shared love of parenthood. Travis even called Kourtney a great mom during an interview with Drew Barrymore at the beginning of March.

“Up until now, I would, you know, date girls that didn’t have kids, and I found it kind of hard,” Travis admitted. “I think they would have trouble understanding, ‘Well, why don’t you want to go to dinner every night with me?’ or ‘Why don’t you want to see me every night?’ Now I’m spending time with a woman who’s a great mom, a great friend. And you don’t have to worry about any of those things. It just comes natural. It’s, like, a maturity thing.”