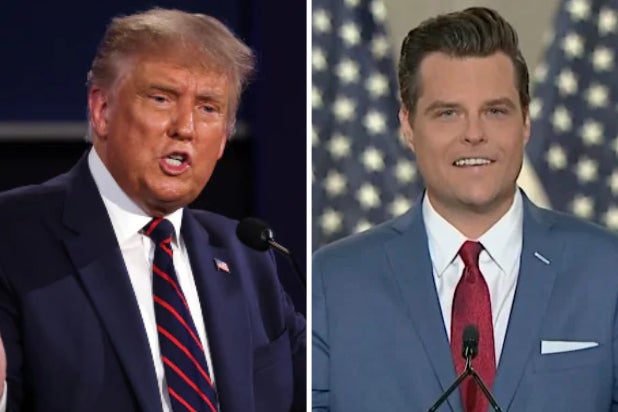 Former president Donald Trump spoke out in defense of Rep. Matt Gaetz Wednesday, denying that the embattled Republican congressman sought a pardon from him during the final days of the Trump administration.

“Congressman Matt Gaetz has never asked me for a pardon. It must also be remembered that he has totally denied the accusations against him,” said a statement from Trump. Gaetz has long been a vocal supporter of the reality star-turned-president.

His defense came one day after the New York Times reported Gaetz sought a pardon and that Trump’s own advisors had to intercede to convince him not to publicly defend the lawmaker, who is under investigation by the Department of Justice over possible sexual misconduct and other crimes.

Gaetz said last week he has no intention of resigning.

The New York Times reported last week that the Justice Department is investigating whether Gaetz, 38, violated federal sex trafficking laws by having a sexual relationship with a 17-year-old and paying for her to travel over state lines. According to the Times, the investigation was opened under Attorney General William Barr in the final months of Donald Trump’s presidency. It’s part of a larger investigation into one of his political allies, a former Florida county tax collector named Joel Greenber indicted last summer on multiple federal charges, including for the sex trafficking of a minor. Greenberg has pleaded not guilty.