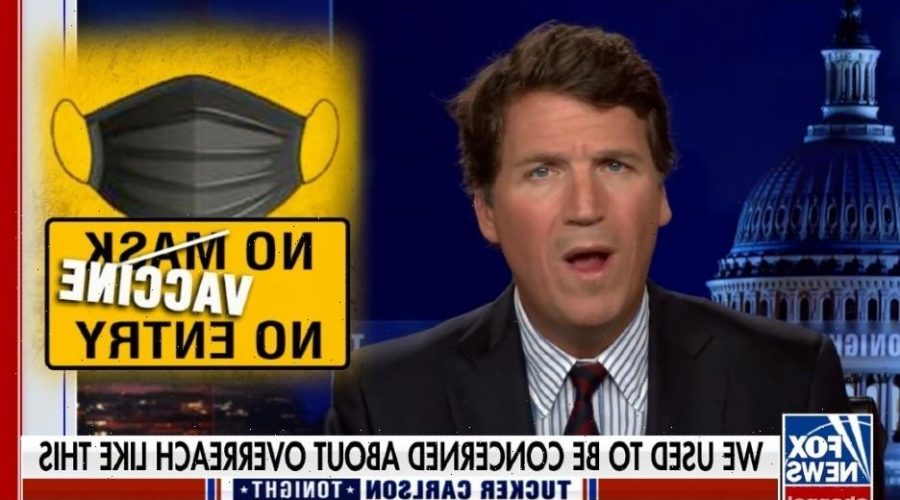 Tucker says that coronavirus precautions are about “good and evil,” not safety

Speaking on the subject of vaccine passports, Tucker proclaimed that “medical Jim Crow has come to America.” He also said that he’s prepared to see unvaccinated people forced to use “separate” water fountains.

On the June 1 episode of “Tucker Carlson Tonight,” Tucker said that just over a year ago — “way back then before the revolution,” as he put it — “pretty much everybody agreed that segregation was the worst thing this country ever did. Forcing certain categories of citizens into separate lesser accommodations barring them from public places, treating them like lepers, untouchable, that was completely immoral and wrong.” 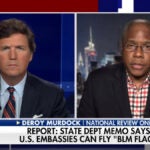 This segregation, Tucker said, comes in the form of businesses and events refusing service to people who aren’t vaccinated. He raged against New York’s recently announced Excelsior Pass, a tech-focused plan to track which residents have the vaccine by scanning a QR code on your phone that displays your CDC-registered vaccination status (if you’ve received a full dose).

New York is the first state to try out using these so-called “vaccine passports” to track and maintain the spread of the pandemic. The New York Times reports that over one million New Yorkers have downloaded the Excelsior Pass, and noted the pass is required for entry in some businesses, like bars or clubs.

“If we’re going to make the ‘unvaccinated’ sit in their own unfashionable little section at MLB games, that’s going to make for some pretty embarrassing photographs sometimes,” Tucker said. “Because it seems like the new segregation looks a lot like the old segregation. And we wonder how they’re going to explain that,” he said, referring to Democratic politicians.

Later in his rant, Tucker threw to a clip of CNN’s “Reliable Sources” with anchor Brian Stelter, who was discussing vaccine hesitancy. On the program, a source pointed out that they’d observed vaccine hesitancy was the highest among white people, compared to Black and Latino communities.

“White Republican men are dangerous, and they can sit at the back of the bus. In fact, they can walk. They shouldn’t even be allowed in public buildings,” Tucker raged. “That’s a story you keep hearing, you just heard it in very clear terms. No group in America is more likely to turn down the vaccine than White Republican men.”

Tucker Carlson also chose to question why politicians aren’t using other infectious diseases (which are not part of an ongoing global pandemic) to “segregate” people.

“The coronavirus is transmissible and it can be dangerous. Well, it is hardly the only illness that fits that description. There are many,” Tucker said. “So politicians can segregate potential COVID carriers from the rest of the American public. Why can’t they do the same thing to people with HIV or tuberculosis or hepatitis C?”

These speculations are unfounded and further serve to back up a federal judge’s ruling last year that Tucker isn’t a credible source of facts and that viewers should approach his show with a healthy degree of skepticism and not under the guise that he’s a news anchor.