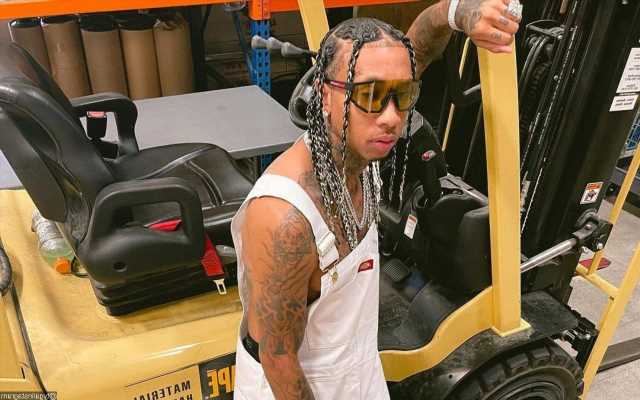 The ‘Ayy Macarena’ spitter has voluntarily turned himself in to Los Angeles police after his ex-girlfriend Camaryn Swanson accused him of abuse following an alleged altercation.

AceShowbiz -Rapper Tyga has got his freedom back. The “Ayy Macarena” rapper was released from jail after spending hours behind bars by posting a $50,000 bond following his domestic violence arrest.

On Tuesday, October 12, the 31-year-old musician voluntarily turned himself in to Los Angeles Police Department after an alleged altercation with his ex-girlfriend, Camaryn Swanson. Prior to his arrest, the authorities confirmed that the rapper, whose real name is Micheal Ray Nguyen-Stevenson, was cooperating with them.

The alleged altercation between Tyga and Camaryn reportedly took place on early Monday after the 22-year-old influencer showed up at the rapper’s California mansion. At the time, she called the cops after her ex-boyfriend allegedly put his hands on her. According to reports, the responding police officers saw “visible marks” on her and “took a report for felony domestic violence.”

Following the incident, Camaryn took to her Instagram Story to share photos of her bruised cheek and eye and bloodstained cuff. “I’ve been emotionally, mentally and physically abused and I’m not hiding it anymore,” the social media star wrote. In a separate Story, she uploaded a video of her showing marks on her eyes and arms. “I’m so embarrassed and ashamed it had to get to this but I have to stand up for myself,” she captioned the clip.

Camaryn also shared a screenshot of iMessage exchange between her and an unidentified man that suggested Tyga had sent a car to pick her up and transport her to his house. “I didn’t show up ‘screaming’ or uninvited,” she wrote, denying reports that claimed she came to his home “screaming in the middle of the night.” She added, “When I tried to leave he physically assaulted [me] and refused to let me leave for hours.”

Tyga, who was previously engaged to Blac Chyna and dated Kylie Jenner, reportedly began dating Camaryn in early 2021. The pair went Instagram official in February, with the influencer sharing a sweet snap of their date at Disneyland Resort in California. At the time, she captioned her post with heart emojis.