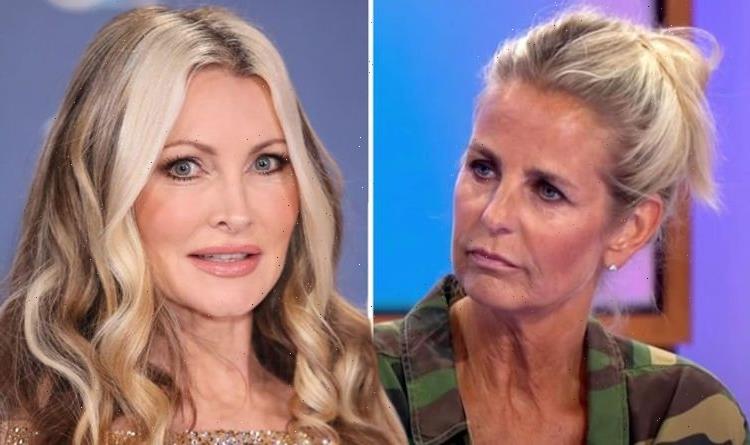 Ulrika Jonsson enjoys sunny weather at home with her dog

Ulrika Jonsson, 53, branded Caprice Bourret, 49, “embarrassing” after the latter urged those in relationships not to say no to sex and to “take one for the team” as she claimed “it’s between five to ten minutes of your life”.

“Men are simple creatures — you feed them, give them compliments and sex and they are happy.”

The model added to OK! Magazine that relationships would be “done and dusted” if there is no sex.

In her column, Ulrika said Caprice’s comments were “cringe-inducing” and accused her of “blurring out the lines of consent”.

She added to The Sun: “There I was thinking women had forged a way forward over these past, equality-inducing decades, where they no longer had a sense of obligation to perform sexual favours for their partners but were quite at liberty to have sex only if they wanted to.

“I feel embarrassed for women like Caprice who still have such an antiquated view of gender-typical roles in a relationship.”

Caprice has since responded to the writer’s comments on Instagram.

The mother-of-two shared a picture of herself alongside husband Ty Comfort, who she married in 2019.

In view of her 202,000 followers, she wrote: “Dear Ulrika Jonsson @ulrikajonssonofficial.. Don’t get your knickers in a twist love.”

She went on to say she was “sorry” that the ex Gladiators star “had a hard time with past relationships” and hoped she found a happy 10-year relationship with “amazing intimacy” like she has.

“You have to work at it but the rewards are empowering for us as women and mommas… and it’s sooooo much fun,”(sic) she continued.

The businesswoman went on to offer Ulrika one of her bedding sets to give her “tons of luck between the sheets”.

She concluded: “Anyways let’s empower and support each other and have a bit of fun too… we all deserve it after this very challenging time.”

Ulrika is believed to be single after joining Tinder earlier this year.

She added: “Women have a right to express their sexual needs… and have them satisfied.”

The presenter has been married three times, most recently to Brian Monet, who she split from in 2019.

She previously said she had been living in a “sexless marriage for nearly a decade”.