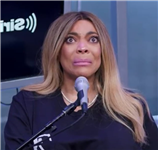 Earlier this year, fans’ fears were confirmed by reports that Wendy Williams has serious health problems.

That is why she has not returned to the show, temporarily replaced by a rotation of guest hosts.

In some ways, Wendy has never been more popular — but fans shouldn’t expect to see her any time soon.

A tragic new report claims that Wendy has lost the use of her legs and is currently in the early stages of dementia.

Toine the Don, whose real name is Antoine Edwards, spoke on The Ricky Smiley Morning Show.

As you can see in the included clip, he does not have good news for Wendy Williams’ fans.

“I hear that it may be a lot longer than we hoped,” he says of her potential return to television.

“Word on the street is Wendy is confined to a wheelchair,” Toine shares.

For the record, that’s not a good way to phrase wheelchair use, but we understand his meaning.

“According to a report,” Toine cites, “she has lost all blood circulation in her legs and in her feet.”

“She is in this wheelchair,” Toine continues.

“And,” he says, “they say the return to the show is not looking good right now.”

“We know she’s been battling addiction, alcoholism, all the good stuff,” Toine characterizes.

Unfortunately, that is not the end of it.

“And it’s now been reported that she’s suffering from the early stages of dementia,” he adds.

As the show is quick to note, Wendy is only 57 years old. That is extremely young for such a condition.

They also note that she has suffered major setbacks in her personal life in recent years.

One was of course her husband’s antics. The other was the loss of her mother, just about one year ago.

“So, let’s definitely keep Wendy in our thoughts and our prayers,” Toine expressed.

We can certainly do that as well.

Wendy is and has been many things, at times adopting a villain role in the world of celebrity news, but we wish her the best of health.

We all remember how, just a few years ago, Wendy Williams had a very public health issue manifest on live television.

Dressed up for Halloween, Wendy suddenly tripped over her words and then, unable to speak, she stumbled and collapsed.

It was a frightening moment for her audience, for viewers at home, for her crew, and for Wendy herself.

Wendy would return to television after the break, brushing off the incident as the result of heat in the studio.

While we don’t doubt the adverse effects of wearing a costume in a hot room, many suspected that something more serious had happened.

Wendy has spent the past few years revealing a number of health issues, from addiction to other ailments.

We cannot verify the report about her losing circulation in her legs and feet or attest to how much she needs a wheelchair.

Similarly, we cannot confirm whether she is having any of the tell tale cognitive struggles or physiological changes in the brain related to early onset dementia.

But we do not have to know the exact state of her health to hope that she is better, soon. Wendy hasn’t avoided The Killer this long to be taken down by a mystery illness.

23/11/2021 Celebrities Comments Off on Wendy Williams Unable to Walk, In Early Stages of Dementia [Report]
Lifestyle