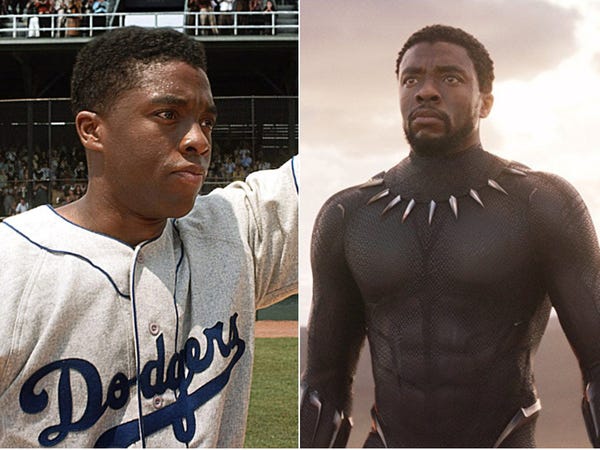 Boseman had battled privately with colon cancer since 2016, the statement explained, and died with his wife and family by his side.

Boseman is best known for his role as T'Challa in Marvel's 2018 record-breaking, mammoth blockbuster "Black Panther."

Marvel Studios issued a statement on Friday night, saying: "Our hearts are broken and our thoughts are with Chadwick Boseman's family. Your legacy will live on forever. Rest In Peace."

While Boseman's legacy is topped off with Wakanda, he should also be remembered for other standout performances, ranging from playing baseball legend Jackie Robinson in "42" to the immortal James Brown in "Get On Up."

Insider has selected a list of some of Boseman's best performances — ordered chronologically — including "Black Panther," and detailed where you can watch them online. 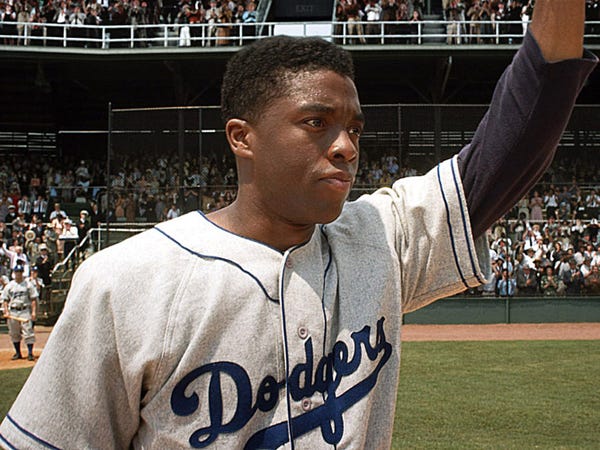 Jackie Robinson was the first Black player to play in the modern major league, debuting for the Brooklyn Dodgers on April 14, 1947.

In a statement seen by USA Today, the MLB said: "We are devastated by the tragic loss of Chadwick Boseman. His transcendent performance in '42' will stand the test of time and serve as a powerful vehicle to tell Jackie's story to audiences for generations to come."

In "42," Boseman stars alongside Harrison Ford, who played Dodgers executive Branch Rickey — the man that hired Robinson and broke the color bar in Major League Baseball.

"42" is available to rent on Amazon Prime. 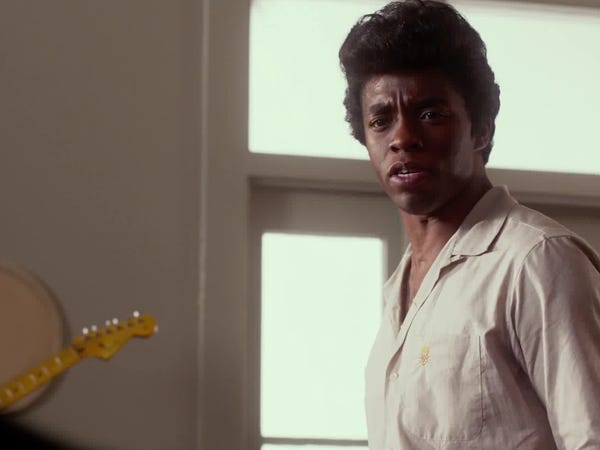 A year after playing one legend, Boseman played another: James Brown.

Boseman told The Guardian he initially ignored the script because he wasn't interested in playing another idol of popular culture so soon after the Robinson role.

"I just didn't think there was any point in trying," he said. "I was like, 'What's next? Gimme something else.' He's too big an icon, and I'd just played one [in 42]. And in my mind, I didn't know how you would even approach those dance moves."

However, Boseman eventually committed to the wide-ranging biopic and received rave reviews for his performance.

"Nothing he does smacks of mimicry," wrote Variety. "He feels Brown from the inside out, the way Brown felt his own distinctive rhythms."

"Get on Up" is available to watch on HBO Max. 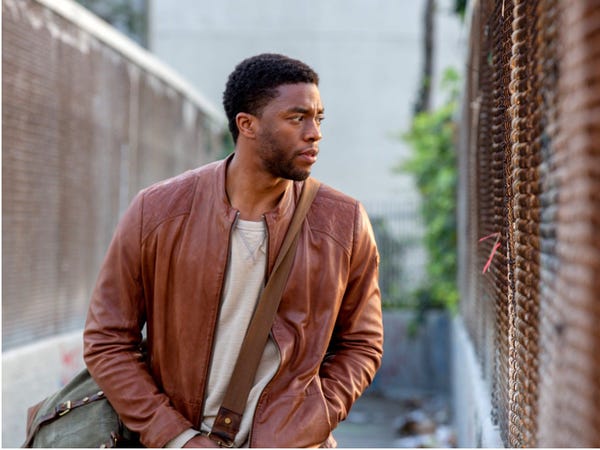 Netflix's "Message From the King" was the perfect action hero precursor for Boseman's performance in "Black Panther."

The film follows Jacob King (Boseman) on a mission to find his sister Bianca (Sibongile Mlambo) in Los Angeles after she goes AWOL, and he will stop at no cost to find her.

While the movie itself did not receive rave reviews, The Hollywood Reporter's Boyd van Hoeij says: "What remains, besides the film's stylish cinematography, is Boseman's intensely focused, almost wordless performance."

"Message From the King" is available to watch on Netflix. 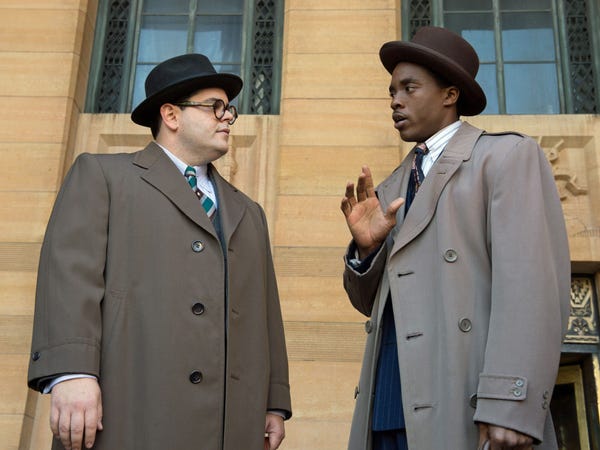 In yet another biopic, Boseman played civil rights lawyer Thurgood Marshall — the first African-American to hold a seat on the Supreme Court.

While Marshall argued some 32 cases between the 1940s and 60s, "Marshall" focuses on just one: State of Connecticut v. Joseph Spell in 1940.

Spell, an African-American chauffeur was accused of raping and kidnapping his wealthy white boss, Eleanor Strubing in a story that gripped the nation at the time. Marshall is employed to defend Spell, which (spoiler) he does successfully, but not without plenty of drama along the way.

According to The New York Times' Manohla Dargis, Boseman and Gad are "natural showmen who never step on each other's moment."

"Marshall" is available to rent on Apple TV and Google Play. 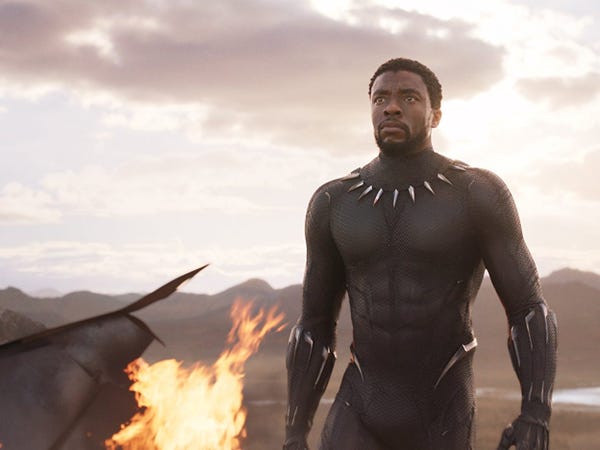 Chadwick Boseman will forever be known as the eponymous hero in Marvel's "Black Panther," directed by Ryan Coogler.

To call "Black Panther" merely a movie would be an injustice — it's more of a cultural phenomenon, and Boseman as its protagonist was at the heart of that phenomenon.

In fact, Boseman pushed Marvel to make sure his "Black Panther" character had an African accent in the film.

"They felt like it was maybe too much for an audience to take," Boseman said in an interview for The Hollywood Reporter's "Awards Chatter" in 2018.

"It felt to me like a deal-breaker," he said. "I was like, 'No, this is such an important factor that if we lose this right now, what else are we gonna throw away for the sake of making people feel comfortable? … Once we decided to do it, we went for it."

"Black Panther" earned a staggering $1.3 billion at the worldwide box office and boasts an almost impeccable Rotten Tomatoes score of 96%, but, more importantly, it gave the world something it had never seen in full before: A Black superhero. 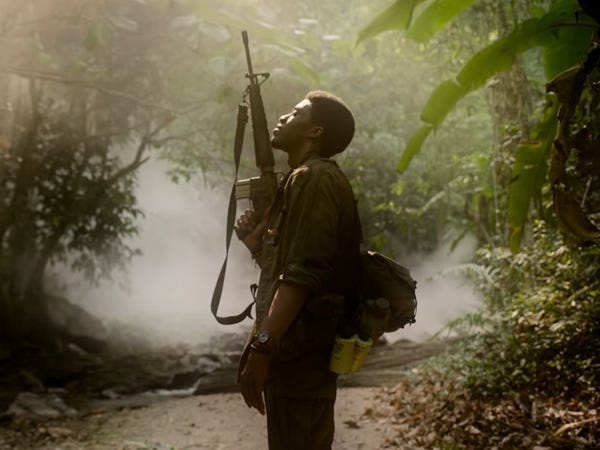 Boseman gave a spiritual performance as Stormin' Norman — the squad leader of the other four Bloods.

The film covers the veterans' return to Vietnam to find the remains of Norman, who was killed in battle, and a bounty of gold. Boseman's Norman was a fearless leader who rages against the US Army's exploitation of Black soldiers.

Lee's movie earned five stars from The Guardian's Peter Bradshaw, who touched on a performance by "the impossibly handsome young Boseman who has grown not old as those that are left grew old."

Bradshaw's line, borrowed from Laurence Binyon's war poem "For the Fallen" seems apter now than ever.

"Da 5 Bloods" is available to watch on Netflix.