It hasn’t even aired yet, but Bachelor Nation fans already think they know who wins Tayshia Adams’ reported season of The Bachelorette. Based on some major Instagram sleuthing, they have come to the conclusion that the man who ultimately wins Adams’ heart could very well be contestant Bennett Jordan. So, why Jordan, of all people? Well, there are two reasons and my personal favorite has to do with doughnuts.

Yes, you read that correctly. Doughnuts! Fans have legit used doughnuts to convince themselves they know who wins Adams’ season. Allow me to explain. The bio on Jordan’s newly reactivated Instagram account reads, "Clear Eyes, Full Hearts (+doughnuts and green juice), Can’t Lose." Then, Adams raised eyebrows by referencing doughnuts in one of her Instagram Stories. The story in question featured a picture of her (really good looking) meal at Fashion Island’s Great Maple restaurant alongside the caption, "Y’all Fried Chicken & Doughnuts." She topped the caption off with a drooling face emoji.

Obvi this is a huge stretch and doesn’t have to mean anything. But, like, I guess it establishes that these two at least have a love of doughnuts in common? 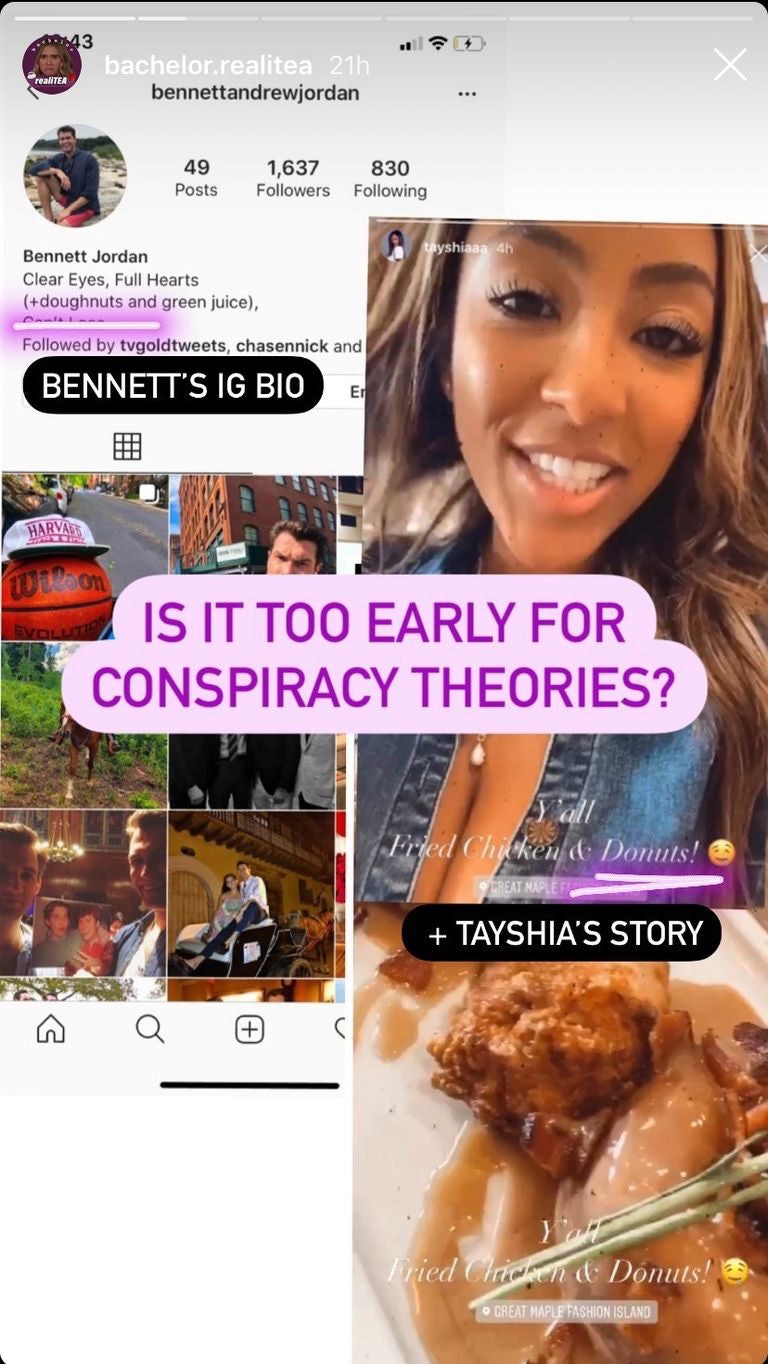 Before you go writing this theory off, let me just point you toward one more small piece of evidence: Per Cosmopolitan, Jordan reportedly reactivated his Instagram later than his fellow contestants. This obvi leads fans to believe that maybe he was holding off longer because he was still filming the show. Also, the account BachDetective found out he apparently made some suspicious changes to his account upon his return to the ‘gram:

Bennett Jordan has been back online, see Instagram numbers early on in filming and this morning for comparison. He has removed two posts and unfollowed a few people just since Monday (followers and followings didn’t change at the same time/rate so it’s not from deactivations)

Bennett Jordan has been back online, see Instagram numbers early on in filming and this morning for comparison. He has removed two posts and unfollowed a few people just since Monday (followers and followings didn’t change at the same time/rate so it’s not from deactivations)

Hm, maybe he unfollowed a few exes? Maybe deleted a couple pics his rumored wife-to-be Adams told him she didn’t like on his grid? Interesting. Very interesting.

ICYMI: Rumors started swirling about in early August that Clare Crawley had apparently quit her season early to be with contestant Dale Moss. The rumors continued to state that Adams had reportedly been cast as Crawley’s replacement for the remainder of the season. None of the rumors have been confirmed, so I guess all there’s left to do is tune in.

16/09/2020 Celebrities Comments Off on Who Wins Tayshia Adams’ Reported Season Of ‘The Bachelorette’? Fans Have A Theory
Lifestyle